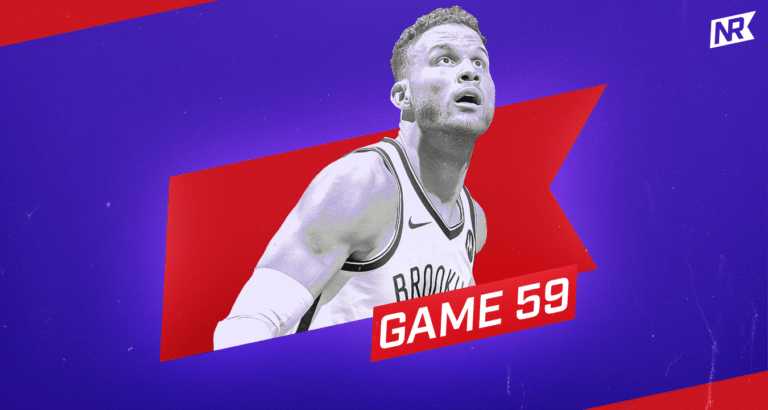 The dreaded second half of a two-city back-to-back started out just fine for the Brooklyn Nets. Facing the Toronto Raptors on Wednesday night, 24 hours after defeating the New Orleans Pelicans, it was the Nets who looked like the well-rested team as they jumped out to a 36-23 lead after the first quarter.

But the good vibes ended there. The Raptors outscored the Brooklyn Nets 69-45 over the next two frames, the lead climbing as high as 18 points. Whether a lack of rest was the biggest reason Brooklyn lost, who’s to say? But symptoms of fatigue certainly began to show as the game progressed.

Joe Harris came out firing with a trio of early three-pointers, but the Nets then made 10 of their other 38 attempts from deep. There were a lot of front-rim clangs, including more than a few from Landry Shamet; he fell back to Earth with a 3-of-17 (2-of-12 from range) performance from the floor. There were also stretches of lackadaisical defense and getting out-hustled, to be sure.

However, it’s hard to feel disappointed with the effort the Brooklyn Nets put forth Wednesday. By and large, they played hard throughout, even cutting Toronto’s lead to five points with three minutes left. Their hot start and late surge, though, ultimately weren’t enough to overcome 20 or so painful minutes in the middle of the game. Hence, the 114-103 final score in favor of the Raptors.

Here are three takeaways, and some extras, from Wednesday night’s defeat:

We gotta start with the main positive of the night, which was unquestionably the play of Bruce Brown. (Yes, Kyrie Irving posted 28 points, 11 rebounds, and 9 assists, but…ho-hum.) He posted a double-double, and this wasn’t a 2011 Kris Humphries 11-and-10 special. Brown poured in 21 points and 14 boards, four of which came on the offensive glass. He even went 2-of-4 from deep, continuing a recent trend of increased willingness to let it fly.

As with any Bruce Brown game, though, it really wasn’t about counting stats. It was about the energy Brooklyn gleaned from this linebacker flying around the court, making stuff happen. Brown truly did a bit of everything. There were the usual timely cuts to open spaces, followed by right-handed push shots. There were multiple possessions of stout one-on-one defense, whether against Kyle Lowry or Pascal Siakam.

And of course, this game wasn’t without Brown creating extra Brooklyn possessions, hurling himself after loose balls. This transition lob to DeAndre Jordan was the cherry on top:

There were some moments that exposed what may become obstacles to playing Brown much in the playoffs. The difficulty of finishing inside, off of cuts and rolls, at just 6’4″, was apparent on a few possessions. And the spacing playing him next to any non-shooter is a bit wonky. But all in all, this was a quintessential Bruce Brown performance. Second night of a cross-city back-to-back, with fluctuating energy, and Brown is there to pick everyone up. You need guys on your roster like that. Brooklyn has a great one.

The Brooklyn Nets Gave an Inch, Toronto Took a Mile

Up 48-36 halfway through the second quarter, all was looking fine. Then, the Nets’ defense started leaking, and Brooklyn could never plug the holes back up.

This wasn’t quite the Miami Heat game, which saw multiple instances of off-ball communication breakdowns that led to wide-open Heat looks. This was more of an effort, or a drive to finish possessions thing. There were a few instances of Irving considering, but ultimately passing on, playing help defense. Jeff Green took a couple possessions off throughout the game. By no means, though, does the blame fall on an individual or two. On many possessions, the Nets played solid defense for 15 seconds, and simply didn’t make that final rotation. These things happen, particularly this year, with this schedule, but that doesn’t make it enjoyable to see.

We’ve seen the Nets run into this problem in many a first quarter this season. We saw it just Tuesday against the Pelicans; a bunch of open looks falling gave New Orleans the chutzpah to punch above their weight class. The timing against the Raptors, though, was far more damaging. Just about every Raptor saw a shot go down in the late second quarter and early third quarter, and it had a snowball effect. By the end of that third frame, the Nets had ratcheted up the intensity, but it didn’t matter. The Raptors were in a zone from all over the court, a zone that, frankly, Brooklyn allowed them to reach. But this time, the Nets didn’t have three more quarters to atone for their mistakes. That, more than anything, wrote Brooklyn’s obituary on Wednesday.

There Was Some Difficulty Adjusting on Offense

The Brooklyn Nets scored 36 points in the first quarter. Quite the start! Over the last three quarters, they followed that up with 22, 23, and 22 again. Not great!

Part of it, as I’ve mentioned, was an inability to make shots. Harris came out scorching, but didn’t shoot much more. The shots he did take were mostly misses. Shamet had his rough day at the office. And Green’s 2-of-9 from the floor didn’t aid matters, either.

But, more than missing shots, Nick Nurse and the Raptors made an adjustment that Brooklyn couldn’t respond to. Irving played the whole first quarter and accrued 10 points and 6 assists; it didn’t look particularly stressful, either. That was the end of that. Of course, Irving finished with 28 points and 8 assists total, so Toronto didn’t shut him down by any stretch of the imagination. But the Raptors’ defense was much more active in preventing Irving from parading to the rim to draw help. They forced him into tough looks (of which he made many, of course), but more than that, they cut off his release valves, and the Nets never quite figured it out.

Upon Irving’s re-entry to the game in the second quarter, the Raptors started showing him two or three bodies early in possessions. His primary defender shaded him to the sideline, where a weak-side defender had already broached the other side of the paint, waiting to intercept a drive. This is easier to do when non-shooters like Brown and DeAndre Jordan (and even Blake Griffin—it’s not about how well you shoot, but how the defense treats you) are on the floor without the Nets’ other offensive superstars.

In any case, this threw Brooklyn’s offense into a funk from which it couldn’t recover. Many possessions looked like this:

Not only do the Raptors ice the ball-screen, but a third defender, Fred VanVleet, gets to the ball-side block as well. Brooklyn’s counter is just okay, at best, and leads to a turnover. Irving is a hair slow getting it to Griffin, who, in turn is a hair slow getting the ball to the other side. The Nets do not make Toronto pay for overloading the ball-side, defensively. Again, it wasn’t any egregious error—you just have to be operating at a high level to beat a well-organized defensive scheme from a healthy Raptors team. Brooklyn just didn’t reach that level Wednesday night, and that, perhaps more than cold shooting, is why its offense sputtered into an uninspiring 67 points over the final three quarters.

Next up: The 38-20 Brooklyn Nets will travel home, where they will play the Celtics on Friday at 7:30 p.m. ET. Depending on the 76ers game on Thursday, a win could place Brooklyn atop the Eastern Conference by half a game. It’s a nationally-televised game on ESPN but, per usual, there will be a YES simulcast.

A few possessions prior, Jordan had just thrown one on Chris Boucher‘s head off a roll to the rim. Wanting to avoid a similar scenario on this hand-off with Harris, the higher weak-side defender (Malachi Flynn) plugs Jordan’s roll. That, however, leads to an open Shamet three. Even though he misses, it’s a great look, and Flynn scrambling to contest it gives Jordan a lane for an offensive rebound.

The Brooklyn Nets have been running this action (off-ball screen to handoff) a ton lately, and it’s a nice way for them to take advantage of Jordan’s rolling gravity, as well as two positive shooters (you’ll also see Irving in these actions, next to Harris or Shamet). Ultimately though, this possession shows the impact of Jordan’s dynamic, violent rolling, which teams have to account for. It could be a main reason the Nets throw him 15 or 20 minutes in certain playoff matchups.