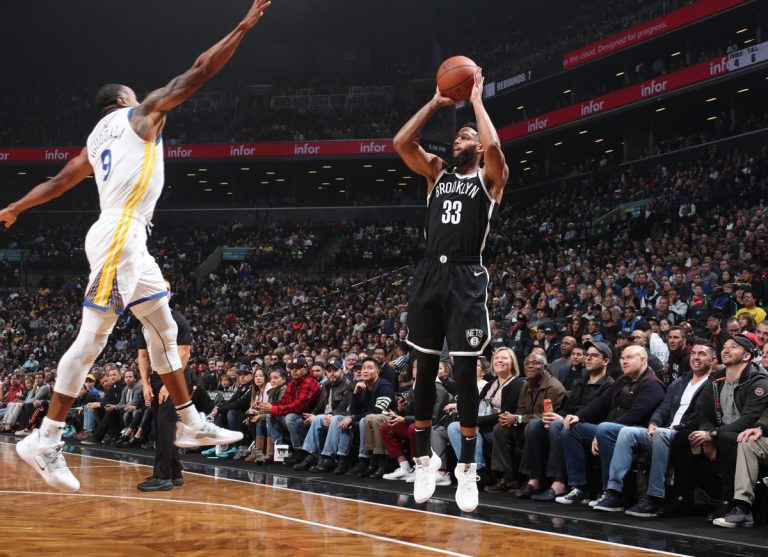 The Warriors were able to build up a 19 point lead twice during the game and with 51 seconds left in the third quarter, Brooklyn was behind 93-74. Steph Curry sunk 5 three-pointers by halftime and the Warriors were paced by Curry and Kevin Durant. The superstar pair combined for 69 points and both played over 36 minutes in the game.

A loss is a loss but every game is a lesson. There are some things to take away from this game, both good and bad, like Caris LeVert and D’Angelo Russell’s growth being legitimate, Kenny Atkinson needs to get his rotations right in a hurry, and it is time to switch up the starting lineup.

A lot of people rush to judge players at the beginning of the season after one or two games, but both LeVert and Russell have been consistently good this season. Just take a look at their stat lines from each of their first 6 games:

Both players had little one game hiccups of down performances (although Russell’s 8 point performance was more about Kenny Atkinson benching him in favor of Spencer Dinwiddie — who was in the middle of a 20 point outburst) but for the most part have been playing a both a high level and a consistent level to start the season. Caris LeVert has been especially good. According to Synergy, he ranks in the top 10 in points per possession as the pick and roll ballhandler and is ranked 6th in isolation scoring (one spot ahead of James Harden).

D’Angelo Russell’s growth hasn’t been as dramatic as LeVert’s, but that is because he has been hindered by Kenny Atkinson and his rotation choices. LeVert has played 30+ minutes in five of six games so far while Russell has only cracked 30 minutes twice so far. Last season it made a little sense to have Russell play under 30 minutes because he was injured and the performance team didn’t want him to get re-injured but those days are done. It is time to take the training wheels off and let Russell be the player he can be. It won’t always be pretty but if he is going to be one of the cornerstones of the franchise, he needs to get the minutes of one.

I have long been a defender of Kenny Atkinson and his odd minute’s distribution but it is starting to get a little out of hand early season. I know that it is a new roster and some players have been injured, but there are times to experiment with lineups and times to go out and win a game. Players like Russell need to be a bigger part of the rotation, players like Jarrett Allen and Caris LeVert need to be on the floor for over 30 minutes a game, and when opposing teams start to go on runs against a weird bench lineup he needs to pull them out then get the starters back in.

This was a game that could’ve had a different outcome if it wasn’t for Golden State’s huge runs in the second and third quarters, both of which took place while the starters were off the floor. Atkinson has often said that he plays the hot hand, so why not follow through with that? Both LeVert and Russell were red hot tonight and playing well. Even if a guard like Spencer Dinwiddie or Shabazz Napier is going off, why not let LeVert play the three and roll with all three players?

If Brooklyn is going to take the next step as a team, then it’s leader needs to right the ship and fix his minute’s distributions before this turns into a season in limbo.

It’s Time to Switch Up The Starting Lineup

Now that players like Rondae Hollis-Jefferson and Allen Crabbe are healthy, it is time to shake up the starting lineup. Jared Dudley is not a starter in today’s NBA anymore. I love him and his presence is good, both on the floor and in the locker room, but he cannot defend at the level needed and he does not contribute at the level needed for a starter. Brooklyn’s need for a stretch four is apparent, but I would rather see Dudley used in some of the experimental lineups off the bench than as a starter. I would put Rondae Hollis-Jefferson back in the starting lineup sooner than later.

In addition to that, Joe Harris should be moved to the bench too. He is a weapon but more effective off the bench against other team’s second units than going against the likes of Klay Thomson in starters minutes. Allen Crabbe should play the three instead of Harris.

Not only is Crabbe better suited for it, but he is a better overall player. Crabbe is someone that has proven to be an elite spot up shooter and someone that I think is the NBA’s next elite scorer waiting to happen. Ankle injuries have slowed him down in Brooklyn and in Portland, he was buried on the bench, but towards the end of last season, he showed everyone what he was really about.

I would like to see Kenny Atkinson start D’Angelo Russell, Caris LeVert, Allen Crabbe, Rondae Hollis-Jefferson, and Jarrett Allen going forward and I want all of them to be playing over 30 minutes a game too.