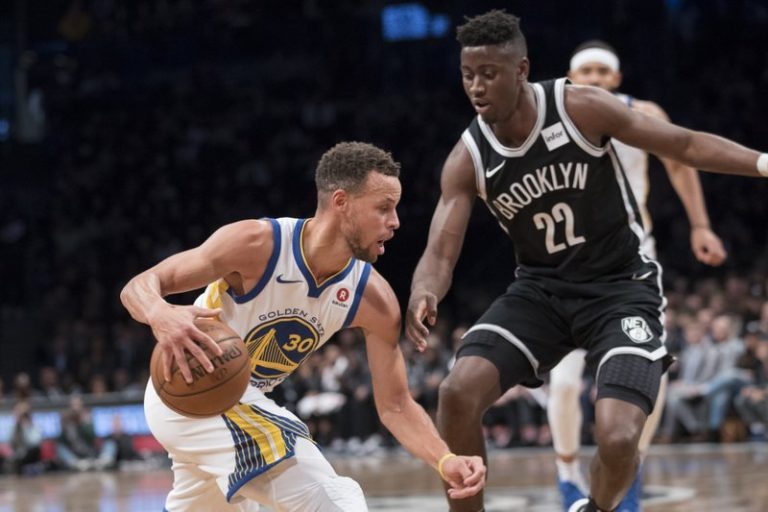 The Brooklyn Nets take on the Golden State Warriors today at home following an unfortunate loss against New Orleans on Friday. Brooklyn was able to play the Pelicans tight the whole way, lead for a large portion of the game, then gave the game away in the last two minutes. The Nets are looking to rebound in a big way following a hard lesson learned and stand a chance of doing just that against Golden State.

The Warriors are looking like the team everyone thought they would be to start the season. They have a prolific offense, a good defense, and are loaded with talent that typically hasn’t been seen on a single NBA roster before but they aren’t unbeatable.

On the same night, we saw Brooklyn collapse in the final two minutes against New Orleans, it looked like we might get an upset in New York. The Knicks played Golden State hard for three quarters before Kevin Durant took over in the fourth and went nuclear on everyone. If Brooklyn wants to beat Golden State they’ll need to play to their strengths, disrupt Golden State in transition, and get good performances out of their bench.

Play to Your Strengths

Right now, the Brooklyn Nets are one of the premier pick and roll scoring teams in the NBA. According to Synergy Sports Tech, Brooklyn ranks third in the NBA in pick and roll ballhandler scoring. They score 1.008 points per possession and players shoot over 50 percent from the floor out of this look. This is in large part to how well Brooklyn’s guards and wings have been running the PnR. Given that Jarrett Allen is already one of the more formidable PnR bigs in the league, teams have trouble stopping Brooklyn when they penetrate.

D’Angelo Russell is very creative with the ball in his hands and has a ton of moves to finish when driving the lane. All he needs is a little room to get a floater or shot off. Caris LeVert has used the pick and roll as an excellent weapon. In fact, LeVert ranks higher than players like Chris Paul, Donovan Mitchell, Kawhi Leonard, and DeMar DeRozan in PPP as a PnR ballhandler. In addition to Brooklyn’s starting backcourt, players like Spencer Dinwiddie and Joe Harris are also having a lot of success so far scoring as the PnR ballhandler too.

Kenny Atkinson’s system uses ball movement and constant motion to create opportunities for penetration or wide open shots on the perimeter. Using the PnR to further aid in penetration is a great way to get looks at the basket but also kick-outs to open shooters as the defense adjusts to the penetration. Golden State is a team that knows how to defend the PnR (and really everything) but if the Brooklyn Nets can execute, good things can happen.

Thankfully for Brooklyn, defending in transition is one thing they have done best this season. They have the fourth best transition defense in the league, only allowing 0.947 points per possession and creating turnovers almost 10 percent of the time. Brooklyn will need to try to limit transition opportunities and get out running with them. The return of Rondae Hollis-Jefferson will only help Brooklyn on defense, especially against a team like Golden State.

The Brooklyn Nets Need Their Bench

The difference in this game will be the bench production for both teams. The Brooklyn Nets are deep this year, so deep that they just assigned their first-round pick Dzanan Musa to the G-League, so that should help. Taking advantage of when Golden State rests their starters are going to be crucial.

Brooklyn’s bench will need to not only keep up the scoring production but also play defense too. If the Brooklyn Nets give up big runs while Curry, Durant, and Klay Thompson are resting this game could get out of hand in a hurry.