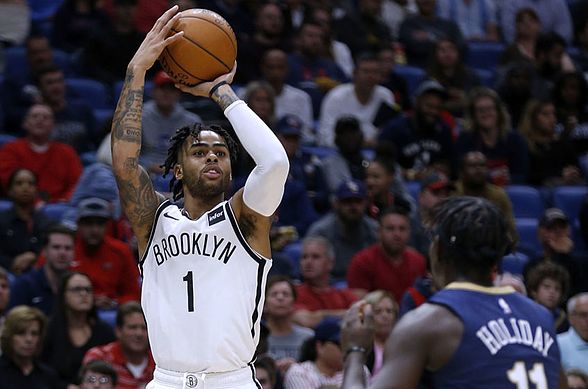 That loss was one of the most heartbreaking since Sean Marks and Kenny Atkinson took over control of the team. The Nets still have a lot of work to do in tight-game situations to elevate themselves as a franchise. The best teams close out such games. They make a name for themselves and use the momentum from them to catapult their entire seasons.

New Orleans is a genuine contender in the Western Conference this season so we can’t be too disappointed. It just sucks for Brooklyn to have victory in the palm of their hands only to have it slip out of their fingertips in the dying moments. Here are takeaways from the Nets 117-115 loss to the Pelicans.

The Good and Bad of D’Angelo

Russell continued the momentum from his Cavs performance and started the first half against New Orleans on fire. 18 of his 24 points came in the first half, where he was making buckets left, right and center.

His entire night (and the team’s) came crashing down all in a moment. THAT turnover.

None of his 5 turnovers had more of an impact. 5 turnovers are too much anyway but the one above might as well be worth 10 of them in how heavily it impacted the result. It overshadowed what was another solid showing for the budding 22-year old. You have to respect him for owning up to the clumsiness of the play.

“All my fault. We’ve got to be better honestly, focused, 47 minutes and 36 seconds. And that other 20 some odd seconds we weren’t focused. I wasn’t. That’s where that mistake happened. Just got to be better.”

How he responds from the play in his upcoming performance against the Warriors will dictate how much he learned from the mistake.

Coach Atkinson summed up the disappointing result in his postgame comments.

“It’s a shame. Because we played a heck of a game. Didn’t close it out. Had our opportunities. But we’ll learn from this. Lot of young mistakes out there. We’ve just got to learn from it.”

As Kenny outlined, the Nets did a lot of things well. They made their shots from the perimeter at a high rate (19/40, 47.5%) and they won the rebounding battle despite coming up against Anthony Davis and Julius Randle, two of the game’s best on the glass. Additionally, they moved the ball well, winning the assist battle 26-23. They dictated the pace and so many facets of the game, unfortunately, it was all to no avail.

Turnovers (21) and free throws (10-15) were again issues for the Nets. The fact they were able to remain so competitive even though they gave up the ball more than 20 times is a credit to the team in many ways.

Two minutes determined their fate and ultimately that’s all it takes. Basketball can be a cruel mistress as Brooklyn discovered in New Orleans.

Ed Davis Is Great, Solomon Hill Is A Clown

Davis has already endeared himself to fans and his teammates with his on court play. While the decision to shove Solomon Hill was silly, you can’t blame him.

omfg. One point game, seconds left, Solomon Hill tries to enter Nets huddle and gets a technical foul on Ed Davis for this. pic.twitter.com/ykGoMggd4g

The Nets have lacked an element of toughness and you have to respect Davis for having his teammates’ and coaches’ backs. Hill, on the other hand, made the best of a shady situation.

Ed Davis on Solomon Hill to @Grady post-game: “He’s a certified clown for the flop — I entertained the clown and that’s what happened.”

There were other moments which had a greater impact on the result. The technical foul gave the Pelicans a little momentum and allowed the crowd to get in and provide energy at a crucial point of the game. Dudley’s decision to foul with so much time still left on the clock was more head-scratching, as he iterated himself.

Didn’t want them to make a crazy 3 ??‍♂️.. They had no timeouts left was playing the possession game! This one is on me.. Fouled to early or maybe should of played straight up.. https://t.co/kcEeFsDqnQ

January 2nd can’t come fast enough, where the Nets get their next chance to exact revenge on Davis and the Pelicans.