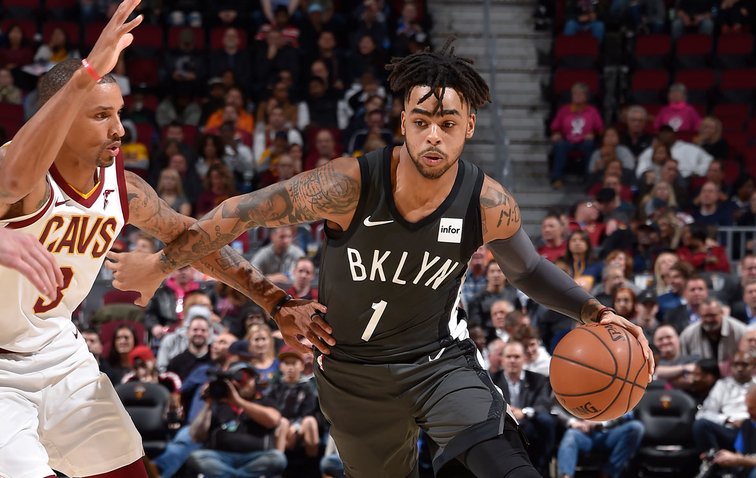 Last night the Brooklyn Nets were able to beat the Cleveland Cavaliers handily 102-86 in Cleveland. Not only was it one of the best defensive efforts Brooklyn has put forth in years but it put the Nets at .500, earned Ed Davis his first (of many to come) double-double off the bench, and the team looked great as a whole.

A lot of Brooklyn’s success came from their execution and they were able to take advantage of a team that is clearly still coming to grips with the loss of LeBron James. Three of the biggest takeaways from this game are D’Angelo Russell is hitting his stride, the offseason additions are proving their worth already, and Joe Harris is starting to really heat up.

D’Angelo Russell is Hitting His Stride

D’Angelo Russell has had an up and down start to the season. After an offseason of growth, getting in shape, and getting better to focus on securing the contract he deserves in the 2019 offseason.

In the season opener, Russell ended up getting benched in favor of Spencer Dinwiddie but last night he rebounded in a big way. Russell ended his night in Cleveland with 18 points (5-14 from the floor, 2-7 from deep, 6-6 from the free throw line), 8 assists (to only 1 turnover), and 1 rebound.

One thing that was pretty apparent last night was just how good Russell can be when he is feeling it. Yes, it came against the winless Cavs and yes, Russell still needs to focus on consistency but it was promising to see. The way Russell can facilitate an offense is different than the most point guards. The level of creativity and ingenuity that he shows on passes is incredible.

The downside of this is turnovers at inopportune times, but last night that wasn’t the case. Russell only had one turnover and was really close to a 20 point, 10 assist effort.

Going forward, I’d like for Russell to keep up this effort. He looked good on offense, didn’t look bad on defense, and really played a big role in Brooklyn’s road win. While Russell only shot 2-7 from deep, I don’t think it was a bad thing. The shots just weren’t falling from deep for him in this game, which happens to all players at some point.

I don’t mind him shooting a high volume of shots from deep because he has shown that he can get hot and burn arenas down with his shooting from deep (like he did in the first quarter in Toronto before Fred VanVleet threw a giant wet blanket on him in the form of incredible defense).

The Offseason Additions Are Already Paying Off

Brooklyn had a very important offseason this year. Not only did they clear space for two max contract slots ahead of some major free agents in 2019, but they addressed a lot of issues on the roster like defense, rebounding, shooting, and depth.  So far we have gotten a good look at a few of the pieces added and they contributed to the win last night for sure.

Jared Dudley has stepped into a starting role while Rondae Hollis-Jefferson and DeMarre Carroll are out. He has added a surprising amount to this team so far and played a big role in the win last night. He went 4-5 from deep and ended with 12 points in 24 minutes played.

While he isn’t helping the defense, he is doing a lot of good on offense and looks like an upgrade from Quincy Acy from deep for sure.

Ed Davis and Shabazz Napier also looked really good off the bench. Davis was able to end with a double-double, scoring 10 points and pulling in 10 rebounds. So far in every game, Davis has done something that has made me appreciate his presence. Whether it is pull in an offensive rebound, contest a shot on defense, or just looked like a calming veteran presence amongst all Brooklyn’s youth.

Napier did the same last night in his season debut. He ended with 8 points and 1 assist in just 14 minutes of action. Napier also looked like someone that will make an impact off the bench when he gets further acclimated with the system and players.

Joe Harris is Heating Up

It looks like Joey Moses has found his stroke to start this season. Like Russell, he had a rough opening game and didn’t have a lot of success shooting but since then he has been on fire. In the past 3 games, Harris has hit 80 percent from deep.

One thing Brooklyn has been missing to start the season is a steady hand from deep. Allen Crabbe and DeMarre Carrol play a huge role in spacing the floor, so seeing them out has really hurt Brooklyn’s system at times. Joe Harris is showing us that he doesn’t need the added benefit of great spacing to be an incredible shooter.

Hopefully he keeps it up and even expands on it when Brooklyn is completely healthy.