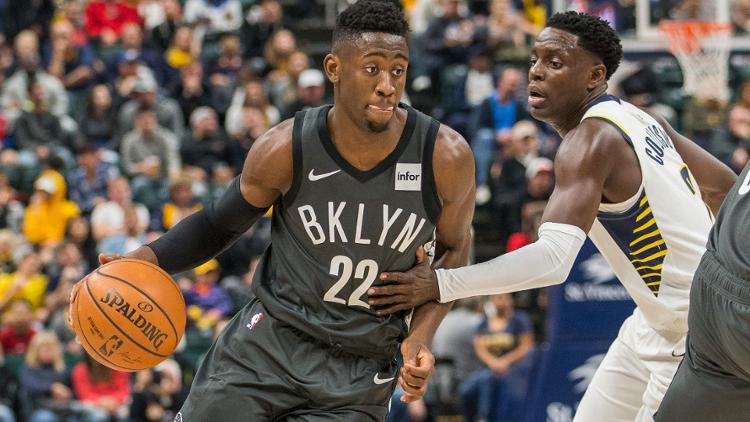 Caris LeVert & His Strong Start To The Season

I was a big fan of the concept of Caris LeVert starting before the season when injuries made it clear that he’d end up starting anyways, but I’m not sure I anticipated how good LeVert would look to start the year. Let’s talk about it.

What I Thought LeVert Would Add

Here’s part of my argument for why I wanted LeVert to start: 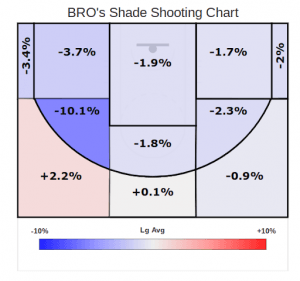 Notably, the Nets shot above league average from the left wing and just barely on threes from the top of the key, but not from any other spot on the floor. Meanwhile, here is LeVert’s shade chart: 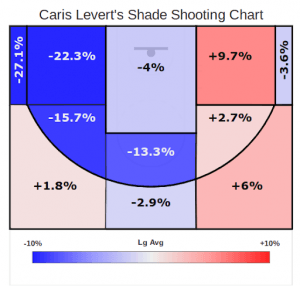 LeVert struggled from the middle and from the left side — oh man, are there some rough numbers from the left side — but his best area of the floor as a shooter, the right side, is the area of the floor where Brooklyn struggled the most and is also a spot where all three of D’Angelo Russell, Spencer Dinwiddie, and Allen Crabbe shot below average. It’s a simplification to just say that “putting LeVert on the floor increases the kinds of shots you’re able to take,” because it also greatly limits some things to considering the struggles he’s shown from the corner. But if Brooklyn can keep LeVert on the right side of the court, he gives them a dangerous weapon in that zone that the other guards don’t offer.

LeVert’s passing and playmaking are useful as well. Per Bball Index, here are LeVert’s talent grades, both on their own and when looking solely at shooting guards:

How He’s Lived Up To That

Making plays and finishing at the basket!

LeVert hasn’t suddenly progressed as a three-point shooter, and he still isn’t doing things from the left side, but a lot of his shots have come at the rim so far. Not taking into account the Pelicans game — because it hasn’t happened as I type this — LeVert is 22-for-30 at the rim this season. He was under league average there last year; now, he’s significantly over league average, and that finishing ability has been crucial to his development.

Let’s take a look at some plays.

LeVert gets loose here from his defender, as the Piston on him drops down to defend a driving Joe Harris. LeVert’s able to get under the basket and receive the pass from Harris. He makes the lay-up. A simple play, but also an important one because a lot of the modern NBA is focused on driving and dishing to the perimeter. LeVert could have stuck in the corner, but Kenny Atkinson recognizes what LeVert has been doing well this year and draws up chances for him to get in the paint.

Here’s another one, but with LeVert as the ball-handler. Sidenote: I love having LeVert on the floor if for no other reason than the fact that I really like watching his passing and ball-handling skills.

LeVert gets the pick from Ed Davis here, maneuvers around it, and then hits the hole with a ton of speed. I’m, like, 99% sure that Caris LeVert is some kind of magician when he decides to drive toward the basket.

One thing that definitely feels…like not a thing that will continue…is that LeVert is shooting 87.5% on shots with four seconds or less on the shot clock. But it does show that he’s been fairly clutch so far, for whatever that term is worth.

Now, some less encouraging things. LeVert’s assist-to-turnover ratio is at a career-low, though that can be attributed to a career-high usage rate, as he’s still adjusting to having the ball in his hands more. And as mentioned above, he isn’t turning into a threat from deep and has, in fact, accounted for a lower percentage of Brooklyn’s three-point attempts than in his previous team years. His assist percentage has also gone down after Brooklyn’s first two games, and that has happened to coordinate with a drop in his scoring totals as well. It’s too early to argue that there’s a correlation between these things, but its a trend worth watching — if LeVert isn’t passing the ball as much or as well, does he end up with tougher shots and lower shooting numbers?

There shouldn’t be questions left about LeVert’s role on this team. More playing time for Allen Crabbe plus a healthy DeMarre Carroll and Rondae Hollis-Jefferson will likely impact his opportunities some as the ball will move around more, but he should remain the starting two-guard moving forward.

And look, those first two games were great and I think they were indicative of what LeVert is capable of, but it’s a long season, and he’s still developing into his true form. Games like his 10 point, 41.7 percent shooting outing against the Cavaliers will happen, but Kenny Atkinson will need to — and I think will — let LeVert work through those struggles on the court.

LeVert’s hot start is a continuation of a hot preseason, and he’s focusing on the aspects of his game that he excelled at last year. This can work. This should work. The Nets have found a very good player who can be around for a long time.