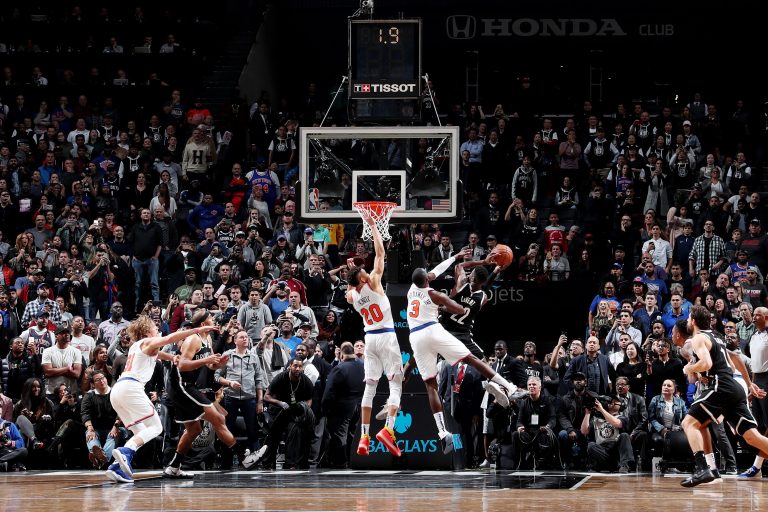 The Brooklyn Nets take on the New York Knicks for the second time this season. Coming off of two heartbreaking losses to excellent Western Conference teams in New Orleans and Golden State, Brooklyn is looking to right the ship and get back to their winning ways over their crosstown rival that they have already beaten once this season. In the last matchup, Brooklyn won 107-105 behind an excellent scoring performance from Caris LeVert and a double-double from Jarrett Allen but the game could’ve gone a very different way.

Tim Hardaway Jr went off for 29 points and forced three steals while Enes Kanter added 29 points and 10 rebounds. Rookie Kevin Knox also chipped in 17 points and 6 rebounds in the close loss. While Brooklyn got the win and was in control of the entire game, the Nets only won by one possession. If Brooklyn wants to win tonight they’ll need to contain Enes Kanter, force turnovers, and protect the ball.

Enes Kanter Needs to be Contained

It is no secret that the Brooklyn Nets have struggled against offensively gifted bigs. Jarrett Allen is currently ranked in the top 5 of both total blocks and blocks per game but he has had difficulty containing the bigs that excel at offense. Since entering the league, Jarrett Allen has gotten worked by Enes Kanter specifically on both offense and the glass. In their first game, Kanter ended with 29 points and 10 rebounds but in preseason Kanter had a 20/20 game against Allen.

So how does Brooklyn slow down such an offensively gifted big? By throwing a lot of looks at him and denying the ball from the perimeter. Brooklyn finally has some depth and needs to use it in these cases. Ed Davis is a great bench big that can compete on the board in ways that Allen isn’t ready to yet. Making Kanter work against someone like Davis can wear him out on the boards. Davis isn’t exactly a lockdown defender on the interior but he understands positioning and can cut down on a lot of offensive rebound chances for Kanter.

The best way to lessen Kanter’s impact is to play the guards tight and deny passes from the perimeter. If Kanter can’t get a clean pass to him then he isn’t going to have the ball in his hands. Caris LeVert has all the tools to play tight on the perimeter, D’Angelo Russell is far from a bad defender, and Joe Harris/Allen Crabbe have enough length to disrupt guards and wings when they are in. Brooklyn should focus on playing New York’s guard’s tight and preventing passes into the perimeter. Playing New York tight will also prevent three-point shots too.

The Brooklyn Nets Need to Force Turnovers and Protect the Ball

The quickest way to get out to a lead in any basketball game is to force turnovers and not give the ball away yourself. New York is a team full of young, promising players but players that are still raw. Getting in their face and forcing turnovers is going to be easier than forcing turnovers against a team like Golden State. Much like what I mentioned above, Brooklyn needs to play New York’s guards and wings tight on the perimeter.

At the same time, Brooklyn cannot allow New York to disrupt their offense. Caris LeVert and D’Angelo Russell are both incredible passers and are the focal point of this Brooklyn offense. Russell has struggled with turnovers throughout his career but only because of the high risk/high reward passes he tries. LeVert is responsible for some of the best passes I have seen so far this season but both guards will need to take better care of the ball if the Brooklyn Nets want to extend their record to 2-0 against the Knicks this season.