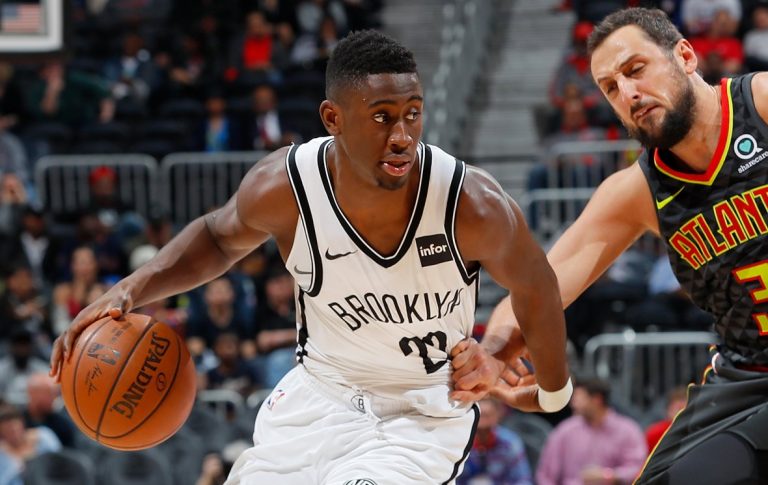 Another week of NBA action is upon us, which means another week of Nets basketball is here as well. This week, Brooklyn plays the Knicks, Pistons, Rockets, and 76ers, so I got in touch with some writers/podcasters who write and talk about those teams.

Joining us for the Knicks is Salvatore Pane, the co-host of The Jab steps and a professor at the University of St. Thomas. For the Pistons, we have Sham Mohile from BBall Index. For the Rockets, it’s The Dream Shake’s Jeremy Brener, and for the Sixers is Liberty Ballers’ Emily Anderson.

It hasn’t been a great start for the Knicks, which isn’t a huge surprise. Is there any chance that things get turned around, or does not having Porzingis make this a lost season?

It’s only a lost season for the Knicks if you had unrealistic expectations coming in. The front office and Fizdale made it abundantly clear that this is a rebuilding year, and the real goals are developing the young players like Ntilikina, Knox, Trier, and Robinson while hopefully adding another top lottery pick in the draft. We’re barely two weeks into the season and already Fizdale’s moved Enes Kanter out of the starting lineup in favor of giving time to the young guys. They’re playing hard and developing good habits, so I hope that when they bring KP back it’s to shake off the rust and not in the misguided hope that the Knicks can push into the 8th seed.

What Knicks player has surprised you the most so far?

Frank Ntilikina. I thought his absolute ceiling was someone like Tony Allen or even an Andre Roberson. But last night he scored 17 on 54% shooting and 42% for 3. If he can really develop a consistent outside shot, that’s a game changer for the Knicks if they ever manage to recruit a perennial all-star. After Frank, it’s Mudiay. I really don’t think he’ll be in the league by 2020.

The Nets beat the Knicks by two earlier this year. What will the result be this time?

I hope the Knicks lose! We’re gunning for those lottery balls, baby!

BLAKE GRIFFIN. I know it was just one game, but how did Blake’s huge night against the Sixers make you feel in terms of this team’s chances for long-term success?

Actually, it made me a bit worried about the Pistons’ chances for long-term success. Griffin dropping 50 in a nail-biting win was amazing for the fans, morale, and most importantly to Griffin, but I can’t help but look at the supporting cast around him during that game. Andre Drummond shot only 30% on 20 attempts, had 5 turnovers, and was ejected in the 4th quarter. Reggie Bullock, Stanley Johnson, and basically everyone not named Blake Griffin, Reggie Jackson, and Ish Smith struggled. Griffin putting up unsustainable numbers in a close overtime win without a key member of the 76ers feels a bit hollow and the Pistons were rightfully exposed on Saturday night at the hands of the Boston Celtics.

What Pistons player has surprised you the most so far?

Blake Griffin could be the obvious answer here, but I’ll go against the grain and say Reggie Jackson. Missing most of the last two seasons with various injuries, Reggie Jackson has somewhat transformed his game to better fit with the cast around him. Jackson still employs a heavy dose of pick-and-roll offense with Drummond or Griffin but has been effective off the ball as well. Jackson has been shooting very well from deep, often receiving passes from Griffin’s post-ups. With the noted decline in Reggie Jackson’s athleticism, an improvement on parts of his game that can grow in spite of that decline (i.e. shooting) will be beneficial to the Pistons moving forward.

Detroit beat Brooklyn by three earlier in the year. With the Nets at home this time, is there reason to expect a different result?

The expectation is that it would be a victory for the Pistons with a much larger margin than the previous matchup. The Pistons were without their two best wing defenders, Stanley Johnson and Reggie Bullock, for that game and Caris Levert took advantage of that void – dropping 27 on the heads of Luke Kennard and the ragtag band that filled in for Bullock and Johnson. Rookie Bruce Brown got the start and played about 18 minutes in his NBA debut, but has only played 14 minutes total since that night. Blake Griffin would be looking to avenge his embarrassing dunk attempt where Dikembe Mutombo…I mean…Jarrett Allen stuffed him at the rim (TWICE in the same month).

Injuries and suspensions have marred the start of this season for the Rockets, and the loss of Trevor Ariza has felt fairly prominent. As currently constructed, are the Rockets the biggest threat to Golden State still?

Yes. The Rockets have not gotten into their rhythm and are slow out the gate. This isn’t anything we haven’t seen before. It also is something to note that the Rockets have not played a game at full strength yet this season and half the team is injured. It is hard to win games when only seven players can play (and one of them is Michael Carter-Williams). They are still the biggest threat to GS because they match up well with them and can challenge them in a seven-game series. They just need to get into their rhythm, which will happen once the team can get back to being healthy. It’s still a very long season, and the Rockets have time and breathing room.

What Rockets player has surprised you the most so far?

Melo. This question is a difficult one given that only a handful of people have played in every game so far. Melo happens to be one of those people and he seems to be thriving in his role off the bench. I’m surprised it has come this quickly and that he has been able to adjust well to this new role.

Who wins — Houston or Brooklyn?

I like what Brooklyn has been able to piece together to start the season. Caris LeVert has finally played up to expectations and the Rockets are failing to meet any. I think it all depends on whether James Harden plays. He should be re-evaluated right before this contest and if he heals, I think the Rockets will win. However, my gut is telling me that the Rockets won’t be ready by then and that Brooklyn will take this one.

Markelle Fultz is starting basketball games. What do you think of that decision? Is it putting the short term at risk too much?

I think Markelle has shown steady improvement in his starts for the Sixers. I think he’s slowly gaining confidence which can only help in the long term. On Saturday, with Ben Simmons’s struggles, Fultz was given more minutes at the point and had a solid 10 point game. Truthfully, the second half starting line up has more firepower offensively but I think the Sixers have enough talent to win games and give Fultz minutes to figure out his game and shot.

What Sixers player has surprised you the most so far?

I’d have to say I’m surprised by the amount of playing time that Landry Shamet is getting. He’s been performing well, even getting a start against the Pistons. His ability to play guard and point guard makes him more versatile, getting him more court time than a more seasoned veteran like Tj McConnell. More than surprised, I’m disappointed at the slow start that Dario is getting. I don’t think it is unexpected with the amount of international ball that he plays over the summer, but I wish that he was playing more like he was late last season.

Who wins — Philly or Brooklyn?