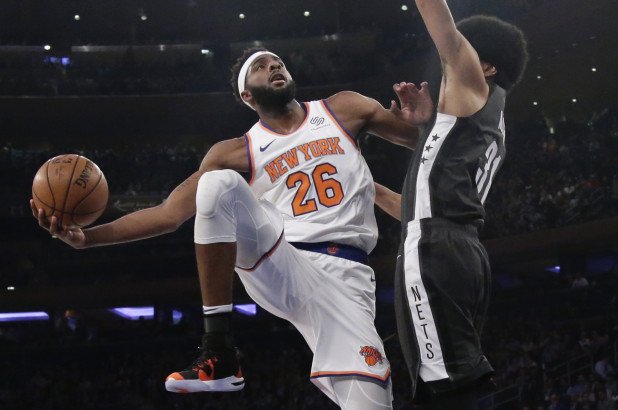 None of the Nets last three losses has been more jarring than their most recent one against the Knicks. They performed above expectations in matchups with the Pelicans and Warriors. There was less pressure in coming up against more favoured teams, though that only makes the showing against New York even more striking. Brooklyn were outplayed in all facets of the game as they put up a disengaged performance against the crosstown rival. Here’s what went wrong.

It’s groundhog day all over again as the Nets were bullied on the glass. The Knicks had a staggering 21 more rebounds (53-32) including 16 more defensive boards. Noah Vonleh (10) and Enes Kanter (15) did the most damage, while they had four other players who registered 5 rebounds a piece.

Brooklyn’s lack of physicality was pointed out by coach Atkinson.

New York’s dominance on the glass helped them put up 29 second chance points to the Nets 12. With their opponent making their physical presence felt it was surprising to see big man Ed Davis play only 12 minutes. He’s known for not only being a rebounding machine but also for providing a healthy level of aggressions the Nets sorely lacked.

Kenny’s minutes distribution has been a sticking point for plenty of Nets fans and writers alike. For a second straight game it was yet again on the radar. Jarrett Allen only played 20 minutes but you can’t fault him for that as he was bullied and seemed a little fatigued coming off the back-to-back. Why he only gave Davis 12 minutes of court time in return though, is baffling.

None of the 12 players who suited up played more than 29 minutes. LeVert was at the head of that despite his offensive struggles (4 points, 2/11 from the field) and Harris played 28. Russell looked solid early yet continued to be benched for the reserves.

You’d like a little less stubbornness from the coach and more riding of the hot hand. Russell and LeVert are both young and fit, they can easily play 30 minutes plus on a nightly basis. The strict, liberal nature Atkinson dishes out his minutes continues to be a head scratcher.  The Nets starters did struggle, only scoring 35 points to the Knicks 70. Coach Fizdale, however, did hand out more minutes to his starting 5 in comparison.

LeVert wasn’t the only one who had his issues on the offensive end against the Knicks. Crabbe continued his shoddy form shooting 2/8 from the field for 8 points. The team as a whole wasn’t much better.

In the games preceding this one, the Nets had been hot from the perimeter. They came crashing back to Earth shooting 28.9% against New York. Jared Dudley was 0/4 from the arc while LeVert couldn’t hit one of his six shots from deep.

Rondae and Spencer were the main bright spots in a shoddy night from the floor. As he continues to regain match fitness, RHJ put up 16 points on 8/15 from the field. It’ll be interesting to see if his performance earns him a starting spot heading into the team’s second matchup with the Pistons. Dinwiddie was also solid racking up 17 points on only 10 shots.

@SDinwiddie_25 put up one of the few highlights for the Nets in an otherwise disappointing performance. His aggression and attack to the rim was nice to see here and on a few occasions. #WeGoHard #Buzzing ⚫️⚪️? pic.twitter.com/yV0FDIpBOR