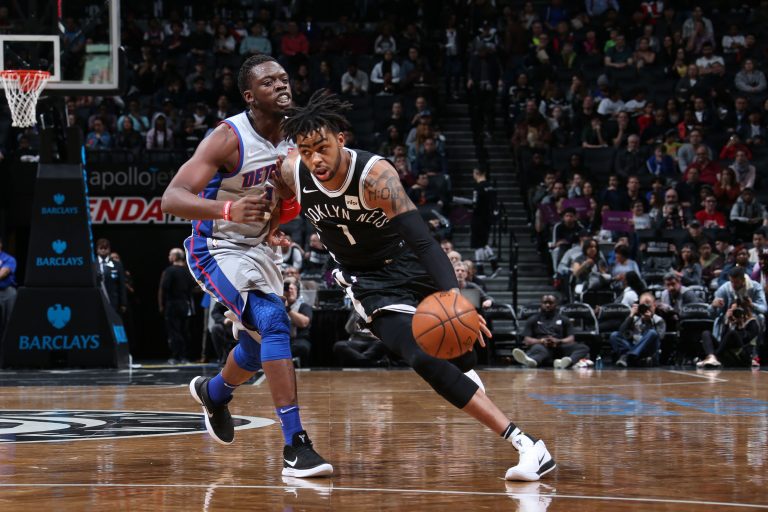 BROOKLYN, NY - APRIL 1: D'Angelo Russell #1 of the Brooklyn Nets handles the ball against Reggie Jackson #1 of the Detroit Pistons on April 1, 2018 at Barclays Center in Brooklyn, New York. NOTE TO USER: User expressly acknowledges and agrees that, by downloading and or using this Photograph, user is consenting to the terms and conditions of the Getty Images License Agreement. Mandatory Copyright Notice: Copyright 2018 NBAE (Photo by Nathaniel S. Butler/NBAE via Getty Images)
Home
Brooklyn Nets
Justin Carter

At one point in Wednesday’s overtime win over the Pistons, the Brooklyn Nets held a 15 point lead. Things were completely clicking in the first quarter, the Nets looked on their way to an impressive victory, Joe Harris was draining threes…

Well, then the foul trouble began, and the starters got their rests, and then suddenly it was a different game, one that felt pretty helpless at times. I wrote a lot of words heading into the fourth quarter about the game and the Nets loss, because it felt inevitable.

Then Spencer Dinwiddie happened, and the Nets spent the final three minutes of regulation mounting a comeback. They spent overtime, sans the fouled-out Jarrett Allen, trying to find a rhythm. They did, finally, and took a 120-119 victory.

Here are some various thoughts from Wednesday’s game.

Here are some notes I took at halftime. Normally, post-game recaps focus on the game holistically, but I think it’s useful to think about the first half on its own too so we don’t forget how we arrived at the end:

Joe Harris needs to take all the shots

Alright, all is a stretch, but this was Harris’ best scoring night of the year.

Entering tonight’s game, Harris had posted 20+ points in a game twice in his career (both last season).#BKNvsDET 10-31-18#WeGoHard

There’s something about Beef Jerky Joe’s shot that just makes me smile. I cover the 76ers for Liberty Ballers and have the same feeling about JJ Redick shots. There’s something about the shooting form that makes it look like the ball is inevitably going into the basket. Harris made four of his seven attempts from deep on Wednesday, and I think the Nets would be best served if he’s shooting seven times from deep per game. It stretches the floor out and helps this team operate more efficiently.

When I began to write this recap, the Nets looked like they were going to lose and Spencer Dinwiddie hadn’t been doing much.

And then the fourth quarter happened. A four-point play. A three. Another three to tie the game. All in the final 3:02 of regulation. Dinwiddie was the reason the Nets got this one to overtime. He shook off a pretty rough night and gave the Nets a chance in overtime, and then he hit the winning three in overtime. Dinwiddie finished with 25 points.

Yeah, those fouls were a problem

There was one point in the fourth quarter where Ed Davis picked up his fifth foul, and since Jarrett Allen was also in foul trouble the Nets went with the Jared Dudley/Rondae Hollis-Jefferson frontcourt duo that is very small and probably not something to deploy by choice against a Pistons team that has a lot of size up front.

The result was Zaza Pachulia going immediately at Dudley and getting the bucket. Kenny Atkinson immediately put Allen in, but in a close game even that little moment there has lasting implications.

With Allen fouling out late, the Nets were forced to use a Dudley/RHJ/Harris/LeVert/Dinwiddie lineup in overtime. That lineup doesn’t have the strength to do much at the basket, and the Nets were forced to shoot the ball more in overtime. Thankfully, that worked well at times, especially with Jared Dudley in the corner. It wasn’t a pretty overtime period, but the Nets pulled out the victory and did so without one of their best players for the final five minutes.

Plays of the night

Just in case you didn’t get a chance to watch this game live due to the whole Halloween thing—getting candy is a valid reason to miss an early season basketball game—here are a few of my favorite plays from this one:

Really fun sequence here. Caris LeVert gets the steal, D’Lo makes the acrobatic play on the other end. pic.twitter.com/fb0rIN8fc3

I said earlier that Hollis-Jefferson bringing the ball up wasn’t my favorite thing on a team full of good ball-handling guards, but this play worked out. pic.twitter.com/x2Fs5NmEif

.@SDinwiddie_25 took the game into his own hands — and DELIVERED ?? pic.twitter.com/PLFoprnuCi

Those were good plays, and that was a good game, and if you missed it then you should go watch it.