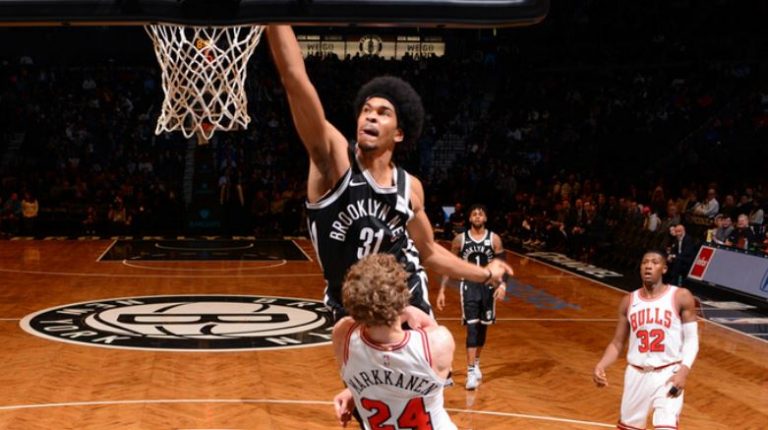 The return of Rondae Hollis- Jefferson and Caris LeVert paid immediate dividends for the Brooklyn Nets as they posted their easiest victory in some time. Heading into the match the Nets were on an eight game losing streak with the last victory coming against the Philadelphia 76ers.

Over the season the guards have led the way for the Nets often with Spencer Dinwiddie providing the majority of the offense. However, on this evening it was the front court which came up big for the home team.

Specifically, Allen Crabbe led the way with 21 points, 1 assist and 3 rebounds. His starting frontcourt partners also contributed with DeMarre Carroll and Jarrett Allen each pitching in 18 points. Carroll also pitched in a healthy 5 assists and 6 rebounds while Allen added 2 assists and 9 rebounds.

Brooklyn fans were thrilled to see both Hollis-Jefferson (7 points, 1 assist, 4 rebounds) and Caris LeVert (6 points, 4 assists) back in the fold. And, while neither blew up the stat sheet their presence allowed coach Kenny Atkinson the ability to utilize more bodies, bolstered the depth on the bench and simply gives him more options on both sides of the court.

Although the Nets trailed at the half they made their mark immediately in the third quarter establishing control of the game. Coming out of the locker room the Nets immediately went on a 9-0 run and took the frame 35-19.

From an efficiency perspective the Nets shot 63.6 percent in the third quarter while holding the Bulls to a measly 36.8 percent. When Spencer Dinwiddie hit a perimeter shot just before the 3:00 minute mark it pushed the Nets lead to 14 points. From that point on the Bulls never got closer than 11 points.

Aside from the efficient shooting the Brooklyn Nets exhibited the best defense fans have witnessed in the past 10 games. Transition was key on both sides of the court. When the Nets successful stop the ball or force turnovers they are at their best defensively. Ironically, the Nets transition offense often stems from their transition defense.

Again, the return of RHJ and LeVert seemed to spur the squad on to a better overall defensive performance. Hollis-Jefferson said post game he was “really rusty, but had fun”. Surely his teammates were feeling an affinity with his message as losing eight straight and 12 of 13 is never fun for any team.

This was the first time in 14 games the Nets had held a team under 100 points. The last time they accomplished that feat was against the Miami Heat. Holding the Bulls to 26.1 percent was also their best perimeter defense in the past 20 games. The best effort came against the Timberwolves who they held to 19 percent on January 27 (although they still lost the game).

Other notables were the 31 assists highlighting just how much the ball and players were moving. Although the Bulls had more fast break points (12 to 10) this Chicago team loves to get out in transition and run, so keeping them in check (particularly in the second half) was key.

Despite losing the rebounding battle (65-53) the Nets won the battle of the paint outscoring the Bulls 44 to 34 in this area.

The free throw disparity was another strange dynamic as Brooklyn only made their way to the line eight times while the Bulls got to the charity stripe almost triple the times (23). As it turned out that variance didn’t help Chicago as they missed eight free throws while the Nets were perfect in their eight attempts.

Although the Nets have future dreams of success there is one notable they can celebrate as they matched last season’s win total of 20 wins with tonight’s victory.

The Brooklyn Nets honored former player Drazen Petrovic who died in a car accident in 1993. A video tribute of the player was displayed at Barclays followed by his mother (Biserka) receiving a commemorative basketball.

Petrovic had one of the more interesting nicknames – ‘Mozart of the Hoops’. Drafted by Portland the shooting guard played a season and a half for the Blazers prior to coming to New Jersey.

When Petrovic played with the then New Jersey Nets he was known as a sharpshooter from deep. In his two and a half seasons with the Nets he scored 3,798 points and connected on 220 three point shots.  This might not seem like a big deal in today’s game. Yet, Petrovic shot with such efficiency from deep he was noted as one of the prolific three point specialists of the time. Each season he improved his percentage from deep (37.3%, 44.4% and 44.9%). Notably, his career average of 43.7 percent from deep remains third all-time.