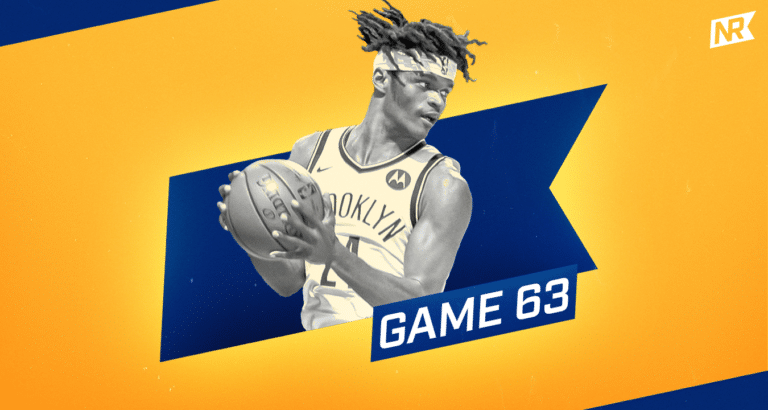 The Brooklyn Nets entered Thursday’s contest fresh off of a gritty win against the Raptors on Tuesday. No stranger to long injury reports, the Nets faced a Pacers team with their own laundry list of injuries. With Kyrie Irving out and the team using its 34th different lineup, Brooklyn got some huge performances from some less-than-household names.

Although the game looked pretty much in hand by the end of the third quarter, it wouldn’t be a true Nets game without making their fans sweat a little. Indiana’s reserves mounted an impressive comeback in the fourth and cut the lead to single digits. However, once Brooklyn’s starters returned, they persevered and hung on for a comfortable 130-113 victory.

Here are three key takeaways from the Brooklyn Nets’ 43rd win of the year:

Revenge is a Tall Glass of Alize

From the minute Johnson checked into the game, he seemed to be playing with a little extra swagger and hype. Now, we’ve come to expect high energy out of him whenever he touches the floor. However, you could sense this game meant a little more. Johnson put up 8 points and 3 rebounds in only 7 minutes during the first quarter. His activity on the boards throughout the game was palpable, but especially in the second quarter. It seemed after every shot went up, Johnson was battling multiple guys and coming down with the ball. He drew multiple loose ball and shooting fouls, which helped Brooklyn seize momentum in the first half. &nbsp;

By halftime, Johnson already had himself a double-double with 12 points and 14 rebounds. Even when the game got a little too close for comfort in the fourth quarter, he was there to grab some key rebounds and even drew a huge loose ball foul on Caris LeVert. Johnson finished the game with 20 points and 21 rebounds, his third career double-double (second with the Nets) and just the third time in Nets history that a player has tallied a 20/20 game off the bench. The last Brooklyn Nets player to record a 20/20 game was Jarrett Allen back in 2019.

Seriously, there aren’t enough words in the dictionary to describe how good Kevin Durant is at basketball. At this point, you’re better off just making a stank face whenever he does something on the court, because that seems like an appropriate response.

Durant hit the ground running from the opening tip and was in his bag early. He dropped 8 points while dishing out 4 dimes in the first quarter. While he shone in the second half, the star power really showed in a 22-point third quarter. He did it in typical Kevin Durant fashion: pull-up threes, contested jump shots, turnaround fades, and getting to the line. After re-entering the game in the fourth due to Indiana’s comeback, he picked up where he left off and connected on some clutch baskets.

Although he finished with 42 points, the most impressive part of Durant’s game was his playmaking. Racking up 10 assists, he had multiple highlight-worthy dimes. At the one-minute mark of the video below, Durant does a masterful job of drawing the double team. He then looks off the help defender that’s responsible for both Blake Griffin and Tyler Johnson, which frees up Griffin for the easy flush. The very next highlight shows Durant driving into the paint and collapsing the D. Three defenders shift their focus to the superstar, which allows Timothé Luwawu-Cabarrot to slip in behind the defense for a layup. Durant could’ve also kicked it to a wide-open Tyler Johnson in the corner.

Durant’s playmaking ability is something that flies under the radar because of his unnatural scoring talent. As if preventing KD from scoring was hard enough, you also have to be wary of his above-average court vision to find the open man, especially if you send a double team.

Friendly Face in a Different Place

I’d be remiss if I didn’t give a shoutout to the Pacers’ LeVert, who was playing just his second game against his former team. Much like his former teammate Durant, LeVert started the game hot, totaling 12 points and knocking down a few three-pointers. He really took off in the third quarter, where he and Durant were almost going shot for shot for a stretch. In ways that looked very familiar to Nets fans, LeVert accumulated his points in his typical herky-jerky fashion.

One could say it was a good night for Nets fans—seeing their team victorious while also enjoying a familiar face ball out. LeVert finished with 36 points on 14-24 shooting and ended the night with some deep embraces from his former teammates.

Interesting Tidbits For The Brooklyn Nets: