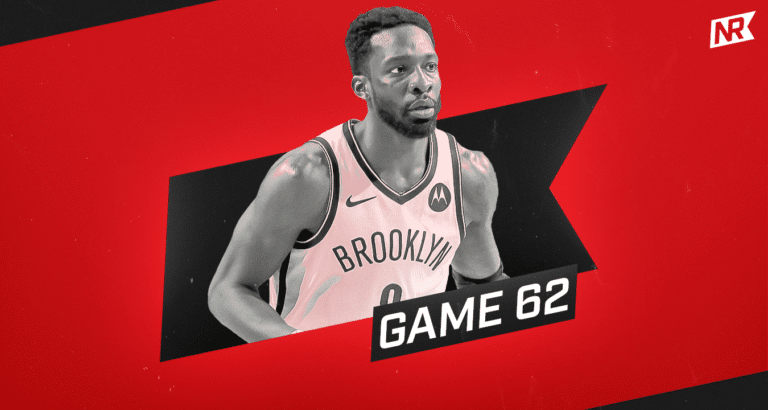 The Brooklyn Nets have dominated the majority of their opponents this season. You don’t climb to the first seed in the conference without doing so. But there are exceptions to every rule, and this year, one of those exceptions has been the Toronto Raptors. This comes as no surprise to anyone who’s witnessed Brooklyn’s struggles this season with below .500 teams, or the Nets-Raptors series since their 2014 playoff showdown (“That’s why they got me here!“).

Tuesday night, the Nets were at risk of being swept for just the second time this season (the Memphis Grizzlies being first). The Raptors were playing their second game in as many nights, but if their legs were tired, it didn’t show early on. In fact, it was the Nets who looked sluggish out of the gates. Brooklyn led 7-5 early and didn’t retake the lead until the score was 37-35, midway through the second quarter. From that point on, the game was what we’ve come to expect from the Lowry-era Raptors: close, gritty, hard-fought, with all the clichés about what some may consider “ugly” basketball. More than a few Nets are waking up today with scrapes and bruises across their body.

But Brooklyn did manage to pull away in the final minutes of the game, dominating the fourth quarter and earning the 116-103 win. The irritation of an often-frustrating game dissipated as Mike James (more on that soon) melted the clock away. The magic of winning, I guess.

Here are three takeaways from a Brooklyn Nets victory that kept them atop the Eastern Conference and clinched a playoff spot:

… is what I, and likely many other Nets fans, were screaming throughout the game. I already mentioned that the win wasn’t wholly satisfying; the defensive glass was the biggest culprit. Throughout the first half, Brooklyn couldn’t create separation from Toronto, continually allowing multiple possessions after what would have been key stops. The Nets couldn’t resolve the issue until the fourth quarter, in which they only allowed two offensive rebounds and sealed the game.

A lack of rebounding has reared its ugly head at times for the Nets this year. There aren’t too many areas of concern for Brooklyn come playoff time, but the defensive glass is certainly one of them. The Nets are 23rd since the All-Star break in percentage of potential defensive rebounds secured (DREB%). The teams below them have a combined 70-114 record in that timeframe. It’s a testament to the Nets’ incredible talent and offensive efficiency that they can win on nights like Tuesday. Brooklyn had eight fewer shot attempts from the floor than Toronto, and one less free throw, despite winning the turnover battle.

Khem Birch in particular gave the Nets all sorts of problems, grabbing 9 offensive boards. To this end, it’s interesting Steve Nash opted not to throw DeAndre Jordan in the game at all, in a matchup where Jordan wouldn’t have to worry about Birch’s (lack of a) three-point shot. The Nets’ DREB% increases 4.1 percent with Jordan’s size on the court, a 91st percentile mark, per Cleaning the Glass. One would think the Raptors represented a feasible matchup for DJ to get some burn. But alas, Nash stuck to his guns, and nobody can complain about a W.

This had to be on display Tuesday night, considering Nick Nurse sent two or three Raptors at Kevin Durant every time he touched the ball. Brooklyn has been feeding Durant the ball primarily in the post since his return. He can obviously score from everywhere, but combining all the perimeter scoring at Brooklyn’s disposal, with the fact Durant is probably his best passing self from the post area is a safe bet. However, it gives a defense more plausible routes to take the ball out of KD’s hands, which Nurse seized upon often. Durant had only registered two attempts from the floor by halftime!

But the offense, despite relatively quiet outputs from Durant and Kyrie Irving (who was doubled often in screening actions, but didn’t have a ton of juice from the get-go), hummed right along. Durant had all the right responses to getting double-teamed, quickly moving the ball. Jeff Green and Blake Griffin were responsible for more than a few timely cuts off said double-teams. And, of course, as they’ve done all year, Joe Harris and Co. led Brooklyn to another 40 percent night from deep. Brooklyn and Kevin Durant welcomed the challenge of Nick Nurse’s defensive schemes, and handled them more than adequately. Whatever agitations the Nets experienced in the first three quarters, the half-court offense certainly wasn’t to blame.

Perhaps I buried the lede here. James, in the midst of his first 10-day contract with Brooklyn, closed the game out at point guard. And not in a meek, table-setting, hand-it-off-to-KD-point-guard way. He was taking dudes off the dribble, pulling up for his shot (which he considers to be any shot available), and running pick-and-rolls with Green. James, more than any other Net, was the fourth-quarter offense. Durant and Irving deferred to a guy who boarded his last flight out of Russia a month ago. And it worked! Nothing should surprise me about this Nets season anymore, and yet, it keeps happening.

Steve Nash stuck to an eight-man rotation Tuesday night, but to be clear, James earned those closing minutes. In his first-half stint, he wasn’t looking for his shot as he did down the stretch, but rather, was consistently driving and kicking the ball out to the three-point shooters:

During these dog days of the season, every team could use some sparks off their bench. It’s a main reason Bruce Brown‘s play has been so valuable over the last handful of games. Some of the shots James took in the fourth quarter were overly audacious (he’ll do that), but he was out there, zooming around. And, hey, they went in. James doesn’t make up for his lack of size with overwhelming offensive creativity, so he’ll have a tough time truly putting pressure on the rim. But perhaps the Nets’ supreme floor spacing masks some of that. All they need from him right now is a high-energy event-creator in limited minutes anyway. It’s not asking for too much. And if Tuesday’s game is any indication, James can be that guy.

Next up: The 41-20 Brooklyn Nets will stay on the road, playing the Indiana Pacers on Thursday at 7 p.m. ET. As always, there’s a ton to anticipate, but a reunion with our beloved Caris LeVert is high up on the list. The Pacers are thoroughly banged up and are coming off a 21-point defeat in their last game … so it’s the exact sort of opponent the Nets have had barn-burning affairs with all season. Expect a good one on the YES Network.

Possession of the Night:

A very simple possession, but effective nonetheless. Here, we see KD’s frame allow him to see the whole court after getting doubled; then, a Blake Griffin cut attracts enough attention to free Joe Harris for a good look. Most possessions required a few more swing passes along the perimeter (Durant only had four assists), but the Brooklyn Nets got good shots all night off these sorts of plays.