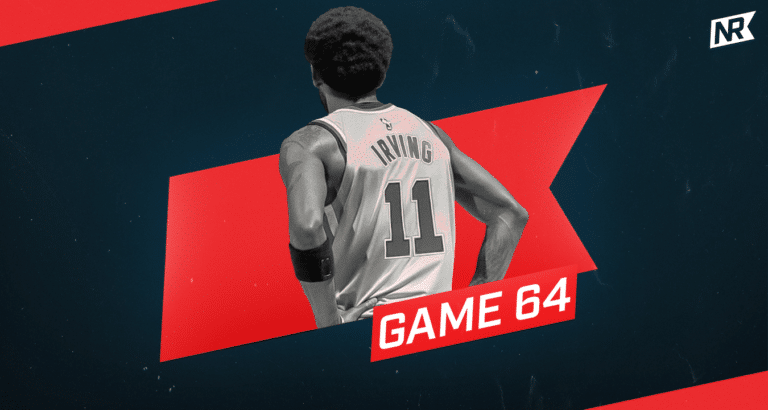 In a contest that was close for nearly three quarters, the undermanned Brooklyn Nets dropped a game at home to the Portland Trailblazers on Friday, 128-109. The Nets found ways to keep the Western Conference’s seventh-best team at bay for a while. But Brooklyn’s scoring slowed as the Nets’ reliance on Kyrie Irving’s playmaking caught up to them and Portland’s complementary players started hitting shots and making plays to pull away.

Here are three takeaways from the loss:

While Damian Lillard’s final numbers were impressive—29 points and 8 assists on 11-of-21 shooting from the floor and 7-of-12 from deep—Brooklyn committed to not letting Dame beat them singlehandedly.

For a while, that worked. Aggressively trapping ball screens to double Lillard and force the ball out of his hands kept him out of a rhythm early and forced the ball into the hands of his teammates. At first, those supporting players—outside of Jusuf Nurkić—struggled to make shots. It got to the point that even when Lillard started to hit shots and found his groove, the Nets were able to match him on the other end of the floor.

But, as Lillard kept heating up and guys like Norm Powell and Carmelo Anthony started hitting shots, it all proved to be too much for the Nets’ depleted roster.

Despite being the only star and lone playmaker active against the Trailblazers, Kyrie Irving still put on a show as he carried Brooklyn’s offense all night long and kept the Nets competitive for three quarters.

Irving finished with 28 points on 12-of-26 shooting along with 3 assists and 2 rebounds in 33 minutes. Sure, he didn’t have the most efficient of outings. But that’s understandable considering the pieces surrounding him at the moment.

Granted, there were still some impressive showings from a number of guys alongside Irving. In 24 minutes and a further increased role as the second and only other ball-dominant guard, Mike James put up a Brooklyn career-high with 15 points on 6-of-15 shooting from the floor while adding 3 assists.

In just five games as a Net, James has impressed relative to expectations. He’s been a solid pickup to replace the injured Chris Chiozza and has provided necessary ball handling and playmaking off the bench as Brooklyn crawls towards full health for the playoffs.

Joe Harris got it going a bit in the second half as he knocked down a pair of triples to keep the game interesting for a stretch early in the fourth quarter. Additionally, both Jeff Green and Blake Griffin reached double figures in scoring with 16 and 11 points, respectively. Green hit three long balls of his own as his versatility all over the floor was evident, while Griffin filled the stat sheet with 8 rebounds and 4 assists.

Those contributions are great and ought not be glossed over. Yet, as Brooklyn now sits just half a game ahead of the Philadelphia 76ers for first place in the Eastern Conference, Brooklyn’s plethora of injuries is hampering any late-season momentum heading into the playoffs.

Granted, the decision to rest Kevin Durant on the second night of a back-to-back was likely the determining factor in Brooklyn’s chances of pulling out a victory over Portland. But still, with the extended absences of Bruce Brown, Nic Claxton, and James Harden, along with Durant’s rest, there’s not much more that fans could’ve expected from the Nets.

In a vacuum, that’s not that big of a deal. With how the Nets have played this season even without ever really hitting full strength, dropping games like these isn’t overly concerning. That said, these results are frustrating. And, the worst bit is, there’s not much the team can really do to escape that until it reaches full health—or whatever full strength actually looks like for this roster.

Nevertheless, this game didn’t tell us anything we didn’t already know. Irving can score the crap out of the ball, Green can do anything asked of him, Deandre Jordan struggles with varying ball-screen coverages, and James is another quality pickup for the NBA Executive of the Year-deserving Sean Marks.