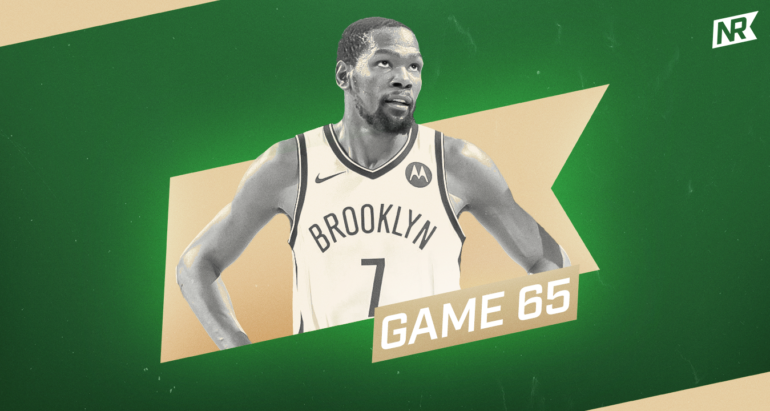 What a game! We’ve been waiting for a healthy matchup between the Brooklyn Nets and a bona fide contender since … I’m not sure when (sorry, Phoenix Suns) … February? Longer?

That’s mostly what we got Sunday afternoon, when the Nets traveled to take on the Milwaukee Bucks in the first leg of their single-site doubleheader. Despite James Harden’s absence, Kevin Durant led Brooklyn through a seesaw contest with the Eastern Conference’s No. 3 seed. And perhaps that is the most important takeaway of the night, despite a 117-114 loss—that the Nets were able to battle the Bucks, a likely playoff opponent, without their MVP candidate.

Sure, Brooklyn lost an incredibly fun, nationally televised game. It would have been exhilarating to top Giannis Antetokounmpo and his 49 points, especially on the road. But zoom out, and it’s hard to feel anything but optimistic about what transpired Sunday in Milwaukee. We were treated to one of the best games of the NBA season, still a fresh experience for Nets fans. Despite missing Harden, and Nicolas Claxton, for that matter, it went down to the wire, even with an outlier outside shooting performance from Antetokounmpo. And, they gathered valuable intel on a foe they could see down the line. Plus, Durant reminded us of what he can do. Life, for now, is good.

Here are a pair of takeaways from one of the least aggravating losses of the season:

The Nets Beat Themselves, Again

Of course, it wasn’t all peaches and cream. Losses never are, especially losses that could’ve been flipped, provided some more attention to detail. And—stop me if you’ve heard this one before—that’s what was lacking on Sunday. Even with Harden out, the Nets probably had more talent on the floor than the Bucks. But turnovers and some untimely rebounding lapses put the nail in Brooklyn’s coffin. The concerns in those areas aren’t at the fever pitch they were three months ago, but they still pop up to cost Brooklyn opportunities, and Sunday was a prime example.

The Nets coughed up the rock 16 times and only forced 10 turnovers. On a night when Brooklyn shot well below their league-leading average from the floor, turnovers sunk them. It wasn’t even that their defense suffered the consequences. Milwaukee only scored 14 points off turnovers, and only 11 on the fast break; Brooklyn outdid them in each category. But extra possessions could have saved the Nets from an unfortunate night in the shooting variance department, particularly Kyrie Irving, who went 8-21 from the field. The primary offender of Brooklyn’s ball insecurity was Durant, who committed five first-half turnovers before settling down in the second half and committing zero.

And while the Nets were mostly sound on the defensive glass, “mostly” isn’t good enough against an elite team. Down 110-107 in crunch time, Brooklyn allowed Jrue Holiday to sneak in for an offensive rebound. This eventually resulted in a made three from Milwaukee, which pushed its lead to six. And while that wasn’t quite the dagger—Brooklyn had opportunity after that possession—it was too much for the Nets to overcome, and they couldn’t quite complete a comeback.

Brooklyn could have defeated Milwaukee, but didn’t, because Antetokounmpo went ballistic. That is the CliffsNotes story of the contest, which leaves a lot of context out. But by-and-large, it’s true.

However, the Nets didn’t defend Antetokounmpo poorly by any stretch of the imagination. Brooklyn started out with DeAndre Jordan defending him, the same strategy it employed in its Jan. 18 home win over Milwaukee. The working theory is that Jordan’s bulk turns Antetokounmpo into more of a jump-shooter, which in turn limits the amount of scrambling the help defense must do each possession.

The problem wasn’t that in theory, but rather that Antetokounmpo was burying every jumper in sight, from turnaround 12-footers to standstill three-pointers. The 30 percent shooter from deep made half of his eight attempts from range and only took six free throws. Meanwhile, the non-Big 3 Bucks only scored 24 points. Half of those came from Bryn Forbes, who Brooklyn let loose too often in the first half but effectively took out of the game in the second half. It’s hard to complain about the strategy the Nets deployed on Antetokounmpo too much, but there was room for improvement.

First, Jordan’s contests on his jumpers could have been more urgent. DJ forced Antetokounmpo into all the ideal looks, but Antetokounmpo received more and more airspace as the game progressed. The first slide below is perfect. The second? Not so much:

Jordan admitted as much in his postgame interview, mentioning the need for stronger closeouts against Antetokounmpo. Brooklyn closed the game with Blake Griffin as Antetokounmpo’s primary defender, and although Griffin had some fine possessions on defense, the results stayed the same. Antetokounmpo got his, and the help defense stayed at home, aside from a couple of Durant digs.

Look for how the Nets come out defending Antetokounmpo on Tuesday, and whether that changes if he’s making jumpers. The standard rule for guarding great players is that you have to mix up coverages. Whether it’s the occasional double, or trap, or an aggressive show in help, something. Brooklyn didn’t do that Sunday, and it bit them in the end.

Next up: The 43-22 Brooklyn Nets will stay in Milwaukee and complete their doubleheader with the Bucks on Tuesday night at 7:30 p.m. ET. It’ll be simulcast on TNT and the YES Network. It’s a critical game in terms of the Eastern Conference standings. Not only will the winner position themselves to challenge Philadelphia for the top seed, but they’ll also hold the tiebreaker in this matchup.