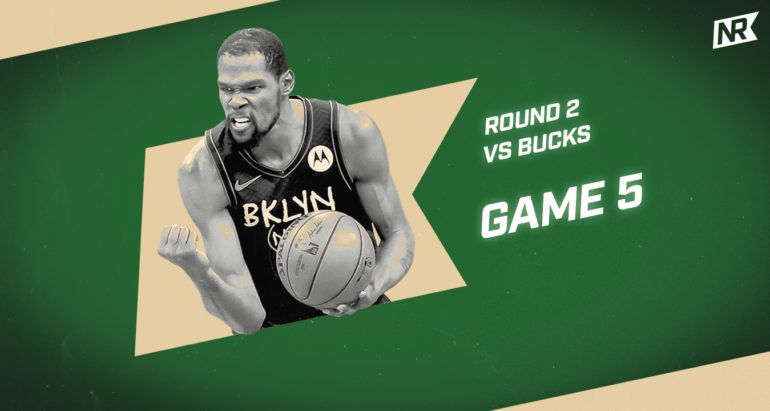 As I write this, it’s been 24 hours since the greatest game in Brooklyn Nets history.

Include New Jersey and it still is a franchise hallmark, led by one of the great individual performances in NBA history. Normally, our postgame recaps follow a simple format highlighted by three takeaways. But there’s really only one takeaway to be had from the Nets’ Game Five victory over the Milwaukee Bucks. And his name is Kevin Durant.

I was beyond fortunate to be at Barclays Center for Tuesday night’s game. It was my first opportunity to see the Nets play live since 2018, when things were quite different. So I reminded myself, win, lose, or draw, to enjoy the experience. I had a difficult time following my own instruction in the first half. The energy never recovered from Milwaukee’s quick start, and subsequent responses to any life Brooklyn showed. A lot of hands on heads.

And then KD went full Kevin Durant. This isn’t to discount the huge shot-making of Jeff Green that kept Brooklyn afloat. Nor to minimize the valuable minutes Landry Shamet gave the Nets in Joe Harris‘ absence. (Harris played, but he sure didn’t show up.) But nobody was walking out onto Atlantic Ave. discussing Shamet’s timely screening and relocating. We were losing our minds over the miracles Durant had just worked in front of our eyes.

By the time his point total started to creep into the thirties, the crowd was falling over itself in maniacal laughter. Post-up, fadeaway, bucket, bucket. Then, at the end of the third quarter, Brooklyn simplified all the way and just had Durant attack Brook Lopez in drop coverage. Lopez’ man, either Blake Griffin or Bruce Brown, would set a screen forty feet from the basket and provide Durant a runway with just one slow-footed troll protecting it. It was fascinating to watch the same phenomenon play out over and over again. Particularly so when both teams had a chance to talk things over after the third quarter, and Milwaukee decided to re-up on their defensive game plan. In retrospect, the result was as much about Milwaukee’s incompetence as Durant’s brilliance, but more on that later.

In the end, though, this is what star power is. When Nets fans lost our minds on the night of June 30, 2019, we were imagining these sorts of moments. The most enjoyable wins often happen for the simplest reasons. And there’s nothing simpler than your guy just being better than their guy. The numbers were just as astounding as the highlights. The next padlock I get will open with 49-17-10, cause I know damn sure I’m not forgetting those numbers anytime soon.

It still doesn’t feel real. Not just Game Five, but the whole two years after the first major domino in constructing this Nets team fell. That the team of Jason Kidd spilling the Iced Tea, the “Who Wants a Piece of Them?” geezers, MarShon Brooks and Chris McCullough hype, 12-70, the Prudential Center, and so on, has Kevin Durant on the roster. We are not supposed to root for an inner-circle Hall of Famer, doing things maybe ten other people in human history could do. The Nets have been to more Finals than many teams this century, sure. We know they can win. But it’s not supposed to happen like this.

So the takeaway is Kevin Durant. This seven-foot basketball magician is a Net. And if you want the short answer to why Brooklyn is now up 3-2 in the series many called the real NBA Finals, it’s him. But here are some more tidbits:

Up Next For The Nets:

You already know. Game Six is on Thursday night, tipping at 8:30 P.M. ET live from Milwaukee. Strap in and get nervous. I already am.