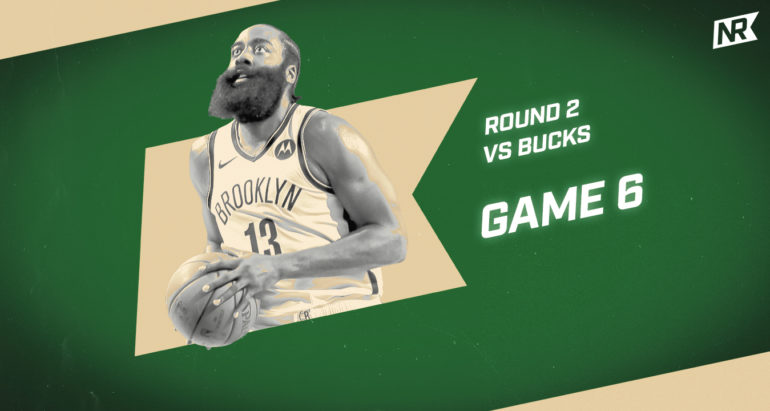 Following Kevin Durant’s heroics in Game Five, Brooklyn entered Game Six in Milwaukee with a chance to advance to their first Eastern Conference Finals in almost 20 years. However, the Bucks had no intentions of just rolling over and letting the Nets advance so easily. In what seems like a regular occurrence, Brooklyn got off to a slow start and found themselves clawing their way back in. Durant picked up where he left off scoring 14 first-half points and ending with a team-high 32 points. James Harden, still noticeably hobbled, looked much better than he did in Game Five, posting 14 points and seven assists.

Milwaukee kept Brooklyn off balance on defense all game and made life tough on the offensive end. Unfortunately for Brooklyn, there was no Jeff Green magic in this one, and no other role players stepped up. That coupled with an offensive onslaught from Khris Middleton ultimately led the Bucks to even the series and forcing a Game Seven.

Here are three key takeaways from the 104-89 Game Six defeat.

Where is Joe Harris?

At this point, even the biggest of Joe Harris supporters have to be fed up with the ineptitude Harris has displayed over the last few games in this series. In 36 minutes, Harris scored nine points while knocking down only one three-pointer. He went on a mini 5-0 run to help trim the Nets’ deficit in the fourth quarter; however, the Bucks went on an 18-2 run shortly afterward. But it wasn’t Harris’ struggles on offense that killed Brooklyn in this game but more so his basketball IQ—or lack thereof.

Harris fouled the Bucks’ Khris Middleton on multiple three-point shots. Two of which coming in the fourth quarter. The last of which helped spark the aforementioned 18-2 run. Whether it’s inexcusable fouls, missed loose balls, or falling asleep on defense, Harris has had a dreadful series. With Harden being almost not 100 percent and Kyrie Irving not available, Brooklyn desperately needs Joe to find his confidence and knock down some shots. Over the last four games, Harris is shooting an abysmal 5-24 (20.8 percent) from deep. As unprecedented as it may seem, Steve Nash may have to consider allocating more minutes to Landry Shamet in Game Seven. If Joe isn’t making shots and continues be a negative defender, it’s almost as if Brooklyn is playing four on five.

Khris Middleton announces his presence to the Nets

With Kevin Durant and Giannis Antetokounmpo pegged as the two “healthy” superstars entering Game Six, a huge part of the game would be decided by whose “Robin” stepped up. Well Khris Middleton, who has faced his fair share of criticism for not stepping up when it matters, made quite the impact. Since Game Three, Middleton has arguably been the biggest X-factor for the Bucks due to his offensive output. Middleton led Milwaukee in Game Six with 38 points, 10 rebounds, five assists, and five steals on 11-16 shooting which included five three-pointers. Whenever it seemed like Brooklyn was starting to build some momentum, Middleton had an answer.

You’d be hard-pressed to find anyone who thought Middleton would be a better three-point shooter than Joe Harris in this series, let alone being the most dangerous one in this series. His ability to draw fouls, specifically when Joe Harris guards him on three-point attempts has also been a huge plus for Milwaukee in terms of building or shifting momentum.

With a banged-up James Harden, it’s clear Giannis has a little more help in the star power category than Kevin Durant. People may forget but Middleton is no slouch. He was an NBA All-Star for a reason and is fully capable of going off on any night if given the opportunity.

Someone, anyone, please respond!!

Look, as great as KD is he simply cannot do it by himself. At least not all the time. Although Harden showed to be better this game it’s clear he cannot be someone the Nets can rely on heavily to assist Durant. Much like Jeff Green stepped up for Brooklyn in Game Five, they need someone to step up in Game Seven. Excluding the garbage time minutes, the Nets only managed five points from their bench. Green, Harris, and Blake Griffin, all of whom played upwards of 30 minutes combined for only 26 points. We all know role players perform better at home in the playoffs than on the road which is why there should be some hope for Nets fans going into Game Seven.

No Kyrie Irving means the scoring load will have to be picked up from somewhere. Whether it’s one of the regular guys such as Shamet of Griffin, or even an unlikely hero like Mike James, someone needs to step up and help lighten the load on Durant’s back.