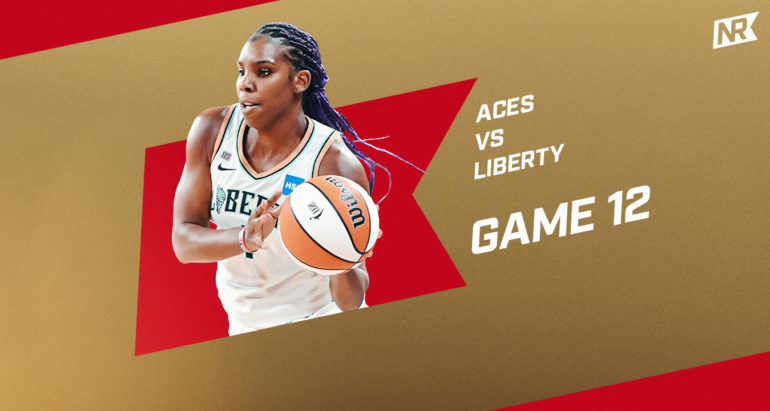 It was deja vu all over again for the New York Liberty in the worst possible way.

For the second time in circa 72 hours, the Liberty were on the wrong end of a visit to Michelob Ultra Arena, falling 103-76 to the Las Vegas Aces on Thursday night. New York (6-6) was paced by 20 points from Betnijah Laney, whose traditional double decalogue was no match for Sin City’s offensive firepower.

Every active member on the Aces (10-3) recorded at least three points, once again led by Kelsey Plum with 18. Fellow reserve Dearica Hamby (10 points, 12 rebounds) had a double-double while A’ja Wilson paced the starters (17 points).

The start of this New York road trip was defined by a players-only meeting (said to be called by captains Laney and Sami Whitcomb) held before Sunday’s win over Phoenix. But the visit to Vegas saw the Liberty, by self-admission, lose a bit of the identity they established during their 5-1 start. It’s clear that the team misses the services of Natasha Howard and a full-strength Sabrina Ionescu, but head coach Walt Hopkins brought up an issue of losing self-belief during his postgame statements.

“There are times where we don’t look like we believe in ourselves. That’s a tough one, we know that a lot of that comes from experience a lot of it comes from, going through the battles,” Hopkins said. He further claimed that “our focus hasn’t been very good the last couple of games”, but the team’s veterans like Laney, Whitcomb, and Reshanda Gray have tasked themselves with finding a solution.

“It’s time for us to gear up and everybody’s got to do soul searching and make sure that they’re addressing individual contributions, where they’re doing well, what are they missing, how can they fix it.”

With Kiah Stokes making an early return from Turkey’s EuroBasket endeavors, Reshanda Gray’s fourth New York term seems to be on borrowed time. But this road trip, set to end in her hometown of Los Angeles on Sunday, has made it increasingly difficult to bid farewell.

Gray’s double-figure effort (17 points off the bench) was her first since July 2019, also with New York. She has averaged 10 points and over four rebounds over the first three legs of the trip and brings an undeniable positive impact to the lineup.

“I felt like this was a great opportunity to show that I deserve to be in this league,” Gray said. “When I’m focused on the right thing, I feel like God continues to create opportunities for me and it’s just my job to capitalize on it…I definitely have to give a shout out to my teammates too because they kind of made my job easier, and just talked to m,e communicated with me, trusted me with the ball just helping me make my job and my transition easy.”

The idea that Gray, who clawed her way back into WNBA regular-season action after a three-year absence in 2019, is still fighting for a professional domestic roster spot feels increasingly absurd. The speedy return of Stokes is going to complicate matters, but until one of the league’s dozen teams offers her a full-season contract, she remains a living, breathing, flesh-and-blood case for league expansion.

Return of the SI

Sabrina Ionescu returned after a two-game absence on Thursday. Entering in the latter stages of the first quarter, Ionescu earned a pair of assists upon her arrival but the game got out of hand afterward, stifling her ability to make an impact. Ionescu earned only a single point at the foul line and later picked up a technical foul (her first professional T) along with former Pac-12 rival Plum assessed by overzealous referees trying to quell a game that had suddenly gotten physical.

Despite the lack of flash box score in her limited time, Walt Hopkins was somewhat satisfied with her performance over 15 minutes of action.

“I thought she did pretty well,” Hopkins said, noting that he was pleased with her defensive effort late in the game when all was lost. “We’ve got to get her to that point where that type of defense is what she brings every single time down the court. It’s going to go for everyone on our team, the demands are the same. I think that our buy-in, and understanding of those demands being across the board, the same for everybody.”

“The sooner we get to that point where we have that consistent weight consistently from every player on the roster, you know we’re going to be able to get back to that same identity.”

Las Vegas has been anything but a playground for the Liberty, who are now 0-5 in Sin City since the artists formerly known as the Utah Starzz/San Antonio Silver Stars moved there in 2018. Head coach Bill Laimbeer is 9-1 against his former employers since taking the Aces’ job prior to their Vegas debut.

“They’re well prepared. That’s a great veteran team,” Hopkins said of Las Vegas. “They’ve done a good job of executing their defense and I just don’t think that we’ve made the necessary adjustments on the court in meeting again.”

Up Next: The Liberty’s four-game western swing concludes on Sunday afternoon against the Los Angeles Sparks (4 p.m. ET, ESPN). It’ll be a celebration of the league’s 25th birthday, commemorating the first-even WNBA contest won by New York back in 1997.