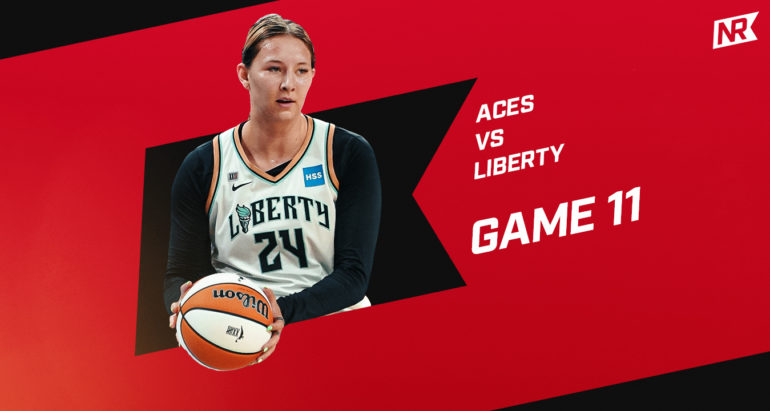 Coming off a solid road win against the Phoenix Mercury, the New York Liberty hoped to repeat that success in their second game of the season against the Las Vegas Aces. Going into the game, the Liberty and head coach Walt Hopkins seemed determined not to repeat the mistakes of their last match-up against the Aces. The first time around, they started slow and fell down by 19 early, and they surrendered 30 points to reigning MVP A’ja Wilson. Hopkins said the Liberty having a hot start against the Aces was a “necessity”: “We know we have to throw the first punch in the first quarter,” he told media pregame. “It’s hard to say we can do that every game, it’s about energy. We always have the will.”

The Liberty came out strong at the tip and were even able to hold A’ja Wilson to just 10 points on nine shooting attempts. But this proved to not be enough, as the Aces overcame the Liberty’s early double-digit lead to take the 100-78 to victory by the final buzzer. Although the reigning MVP didn’t score much, she drew double and triple teams all night, and her teammates were more than able to pick up the offensive slack and take advantage of the space created. Kelsey Plum led all scorers in the game with a career-high 32 points, and Dearica Hamby put up 16, both off the bench.

In the loss, we saw another hot scoring game from Jazmine Jones, who has embraced a “next man up” mentality over the last few games following the injury to Sabrina Ionescu. She ended the night with 17 points. Betnijah Laney was New York’s next highest scorer, scoring 15 points but struggling with free throw shooting (20 percent) and turnovers (8) on the night. Also in the double figure club for the Liberty were Sami Whitcomb (10) and Kylee Shook (12), the latter of which I’ll talk a bit more about in just a moment!

Liberty come out swinging, but can’t sustain it

A big focus coming into this game for the Liberty was throwing the first proverbial punch. They wanted to start the game strong and go on the first run, not looking to have a repeat of what happened last time out against the Aces, when they got into a hole in the first quarter and were unable to overcome it throughout the game.

The Liberty did manage to land the first blow this time out, coming out aggressive from opening tip and establishing an 11-point lead by the midway point in the second quarter. Kylee Shook was a surprising source of energy in the hot start, she was able to take advantage of open threes and good looks inside to score 10 points before the eight-minute mark in the second. She ended up having a career high, notching highs in both points (12) and rebounds (9).

The problem instead became sustaining that success when the Aces punched back. In the last six minutes of the first half, Las Vegas was able to take advantage of some slow rotations by New York’s defense and go on a run of their own. Propelled by three back-to-back buckets from Dearica Hamby, the Aces outscored the Liberty 22-8 to close out the first half to take a three-point advantage into the locker room, yanking away both the lead and the momentum for the remainder of the game.

I thought Jazmine Jones did a really good job of summarizing what went wrong for the Liberty when we spoke to her post-game:  “We just gotta be on our toes throughout the whole game,” she reflected, “Defensively, in the second, third, and fourth quarters, we weren’t there as a team. We weren’t as locked in as the first.” Jaz is absolutely right. If the Liberty want a different result when they square up against the Aces again tomorrow, they’re going to need to sustain their effort and energy on both ends of the ball from first tip to final buzzer.

One thing that really hurt the Liberty throughout the game—then snowballed as Vegas went on their run—was turnovers. The Aces played a deeply disruptive brand of defense, applying ball pressure and getting steals and deflections, knocking the Liberty off their offensive rhythm and forcing them to cough up the ball. New York ended the game with 19 turnovers, which Las Vegas was able to turn into 22 points.

Kelsey Plum, in particular, got a lot of her offense off of Liberty miscues last night. She dropped 32 points on the Liberty, converting 14 of those points off turnovers. “Obviously Plum just single-handedly, absolutely destroyed us,” Walt Hopkins said post-game. And that about sums it up. Almost every time Plum got going off a deflection, she was able to take advantage of weak transition defense to get a basket.

Betnijah Laney recorded eight of the Liberty’s turnovers, though as Coach Hopkins pointed out post-game, that’s partially due to the large role Laney plays in the Liberty’s offense, especially with Sabrina Ionescu out to injury. “I don’t know that Las Vegas did anything special to bother her,” Hopkins said, “We play through her so much, her usage is so high. Last game [against Phoenix] she had 10 assists and one turnover.” Be that as it may, the Liberty—and Laney—will need to do a better job in Thursday’s rematch against the Aces. “We have to make sure we’re taking care of the ball, and make sure we’re not making any of the same mistakes,” said Laney.

Aces won the “Clash of Identities,” dominating the post

Both times the Las Vegas Aces and New York Liberty have met this year thus far, much focus has been put on the “clash” between these two teams’ approaches to offense. While both of these offenses are driven by the pursuit of efficiency, Coach Hopkins’ system in New York emphasizes creating space for three-point attempts, and Bill Laimbeer’s system in Las Vegas focuses on generating offense through the post. As such, the question in these Aces-Liberty games is a simple one: Which team can stick to and execute their offensive game plan better and more consistently? Last night, the Aces won that battle.

“They were tougher than us,” Hopkins said after the game. “We did not adjust to them at all. I thought we played much more to their identity than to ours.” The numbers back that statement up: The Liberty allowed the Aces to score 58 points in the paint last night, and only scored 27 points off threes themselves, held to just nine-of-28 shooting from deep.

The Aces were also bolstered by winning the rebounding battle, though that’s not shocking with the size of their frontcourt and the Liberty being down Natasha Howard and Kiah Stokes, as well as Sabrina Ionescu (who rebounds well for a guard). Vegas outrebounded New York 36-24 and did an excellent job of turning their offensive rebounds into second chance points, scoring 15 on the night.

If there was one silver-lining to the Liberty’s loss, it’s that second-year player Jazmine Jones has continued to look locked in on both ends of the floor. Fresh off a then season-high 16 points in the win against Phoenix, Jaz set a new season high again against the Aces Tuesday, hitting six of her eight shots for 17 points, which led all Liberty scorers. Aside from her hot shooting, Jones showed just how much of a menace she can be on the defensive end too, recording two steals and this emphatic block on Kelsey Plum:

Next Up: The Liberty stay in Las Vegas for the second of a back-to-back matchup against the Aces at home. The Liberty will look to prevent the Aces from sweeping the season series. Tip-off is 10pm ET on CBS Sports Network.