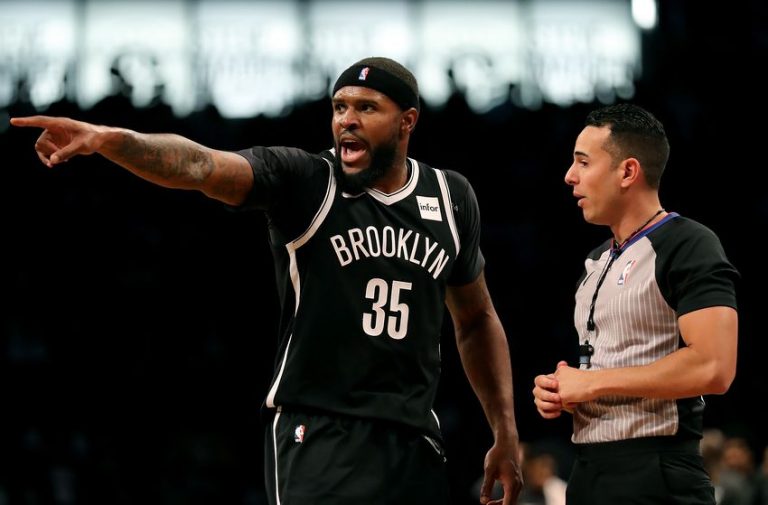 NEW YORK, NY - OCTOBER 20: Trevor Booker #35 of the Brooklyn Nets reacts to a call in the first half against the Orlando Magic during their game at Barclays Center on October 20, 2017 in the Brooklyn borough of New York City. NOTE TO USER: User expressly acknowledges and agrees that, by downloading and or using this photograph, User is consenting to the terms and conditions of the Getty Images License Agreement. (Photo by Abbie Parr/Getty Images)
Home
Brooklyn Nets
Brooklyn Nets Analysis
Zach Cronin

Back on December 7, the Brooklyn Nets and Philadelphia 76ers executed a deal that sent Jahlil Okafor and Nik Stauskas to Brooklyn for Trevor Booker. It’s an agreement that hurts the Nets in the short-term but is geared to make up for itself down the line. Booker, 30, was in the last season of his contract, and it’s possible the Nets were going to let him walk in free agency. If that were the case, it makes sense for the team to trade him so they can get something back.

Booker was in his second season in Brooklyn after coming over from the Utah Jazz. He quickly became a fan favorite. Last season, when “Brooklyn Grit” was the team slogan, no one exemplified that better than Booker. He’s got an old-school mentality, a fierce competitor who does everything possible to dismantle the morale of an opposing team.

Defensively, Booker took on the role of being the energizer, something necessary for a young squad that is inexperienced. He excelled matching up against guys similarly sized, and his effort on the backboards was much-needed. The difference maker, however, was Booker’s willingness to do the little things.

In basketball, hustle plays decide close games. When a team has players who dive on the floor for 50-50 balls, box out or take charges, those extra possessions will pay off. Brooklyn didn’t have many of those instances during Booker’s tenure, but he still never relaxed on a possession. That attitude resonated with Nets fans based in New York City. The citizens who call this magnificent place home are always hustling, doing whatever’s necessary to get by. Booker’s blue-collar approach led them to warm up rapidly.

His defensive efforts, however, went to waste more times than not. The Nets are still struggling on that end of the floor. When they play competitively, it’s because of their offense. Spencer Dinwiddie and Rondae Hollis-Jefferson have shown up during D’Angelo Russell’s absence. They’ve emerged as the go-to playmakers alongside Caris LeVert, who’s been getting much-needed experience as a floor general. Without Booker, though, the offense runs into problems.

According to Basketball Reference, the Nets boasted an offensive rating of 115.3 with Booker on the floor, compared to 102.6 when he sat, a differential of 12.7 points per 100 possessions. Without him, the team is losing one crucial thing — easy buckets.

Booker doesn’t have much of a post game and is a terrible shooter. He makes up for that by positioning himself appropriately, whether he’s rolling to the basket, cutting or crashing in for an offensive rebound. He was averaging 10.1 points a night with Brooklyn this year, and that improved to 11.5 with the Sixers.

Although the loss of Booker was an enormous one, it was going to happen sooner or later. With it coming roughly 30 percent into the campaign, everyone has time to get used to life without their enforcer. That’s both good and bad. Over the last four games, Brooklyn’s offense has struggled mightily, and that’s because they’re short somebody who was capable of cracking double-digits. It’s not all bad, though. The Nets got two able-bodied players in the deal. If Booker left in free agency, that wouldn’t have happened.

The Other End of the Trade

There are, of course, some concerns with both Okafor and Stauskas. Kenny Atkinson has been trying to work the two into his rotations organically. Because they were in the doghouse in Philly, they seldom played. When a team has guys who aren’t seeing the court, they’re unable to stay in game shape, and the coaching staff doesn’t want that liability on the court. It’s an entirely understandable concern.

Given the circumstances, both Okafor and Stauskas are capable of producing more than Booker was. Eventually, that will happen. At 22 and 24, respectively, they have time.

For the Nets, Okafor was the centerpiece of the deal. Tyler Zeller and Jarrett Allen have come on strong as of late, but they can only do so much; notably Allen. With Okafor, Brooklyn would have someone to occupy the defense when those two guys aren’t on the court. Since losing Booker, it’s tough to deploy a five-man rotation where everyone’s roughly the same height with similar play styles. The defense doesn’t have to worry about much, and Russell’s injury only worsens it because it’s tough for the team to create a bucket on a consistent basis.

When in doubt, one of the wings can toss the ball to Okafor and see what happens. Maybe he will score. Perhaps he will draw a double and kick it out to a shooter. As of now, however, the team’s biggest concern is getting him acclimated and back up to speed after withering away on the 76ers bench.

The Brooklyn Nets will feel the effects of the Trevor Booker trade for a little bit longer. Until then, guys just need to step up. From top to bottom, everyone will have to continue to work off of each other and scrap and hustle to make plays happen. Of course, things will get easier once Okafor and Stauskas fit into the rotation. How much easier, though, has yet to be seen.