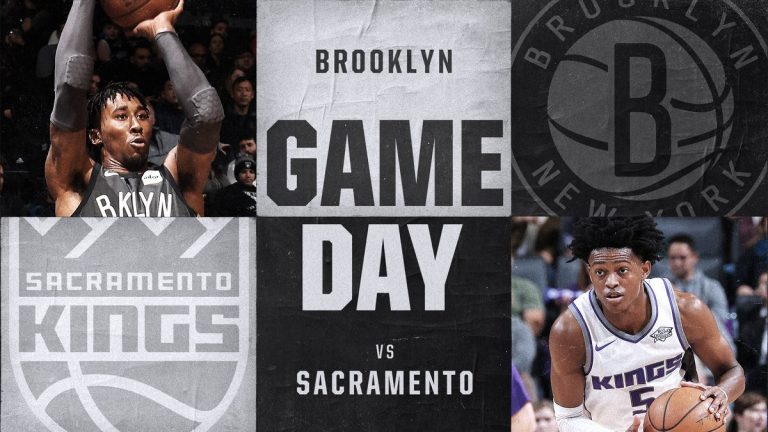 The Brooklyn Nets play host to the Sacramento Kings who arrive on a high after upsetting the Sixers on Tuesday December 19, whereas the Nets have lost three in a row including a shellacking at the hands of the Indiana Pacers in their last outing.

Let’s break down the match with a view to key matchups and analysis of how the Brooklyn Nets can capture the victory.

Battle of the Benches:

The Kings boast the best bench in the business. Often Sacramento’s reserves are the reason they stay close in games or pull out victories. Case in point,  in the upset of the Philadelphia 76ers last night the Kings reserves outscored the Sixers 48-39. Moreover, the Kings reserves shaved a 16 point lead and held the Sixers scoreless for four and a half minutes to start the fourth quarter.

Given the final score was 105-99 that six points win total can be credited to the Kings reserves. In fact, it was Buddy Hield‘s three-pointer which put the Kings in front 79-78 at 9:39 of the fourth quarter, a lead Sacramento never relinquished.

A look at the key bench stats showcases several categories in which the Kings are tops in the NBA. Specifically, the Kings rank first in

Not to be ignored the Brooklyn Nets bench also register near the top in several stats categories. Comparatively, the Nets rank:

With arguably the two best reserve units in the NBA it should result in a highly entertaining game with little let down between the starting five and the reserve units.

Over the weekend the newest Nets, Jahlil Okafor and Nik Stauskas made their debuts in Toronto. Stauska, in particular, made a splash scoring 22 points but was held scoreless versus the Pacers.  Okafor was mildly effective, but clearly needs additional time off the court for conditioning plus  Atkinson needs to adapt and tweak his offense to best capitalize on Okafor’s assets.

Initially, Atkinson said the team would take time to work Okafor and Stauskas into their system via practice and film sessions. With both players receiving minutes in the Raptors game Atkinson has a better read on their strengths and weaknesses. Not surprisingly Okafor is rusty having not played much competitively. To wit, Okafor was shut down last season following the Sixers March 22 game versus the OKC Thunder.

This season Okafor appeared in just two games for a total of 25:17 playing time. Offering a view of the angst existing between Okafor and the 76ers, the big man seemingly threw shade at his old team saying he was now working with a “real NBA coaching staff“.  Yet, shortly afterward Okafor recanted saying his quote was taken out of context.

#Nets big man Jahlil Okafor says his comments about the #Sixers coaching staff were taken out of context. pic.twitter.com/izksSeDOVN

Regardless of the spin, the fact remains Okafor needs conditioning. Even if Atkinson tweaks the offense the big man will still need to be able to keep up with the Association’s third fastest-paced team. As per Brian Lewis of the New York Post, Kenny Atkinson spoke of Okafor’s need to be better conditioned as a starting point:

‘I talked to Jahlil, had a great conversation with him. The plan going forward is a couple things. We need to help him get in better condition, that’s first off,” Atkinson said. “We need to integrate him more into the system. It’s going to take some time. I’m not going to give you a date but it’s a strategic plan, just like we’ve done with all our guys, integrating guys into the team. It’s going to take some time.‘ – Atkinson

Whose Veterans Have the Upper Hand?

As much as both squads are primarily teeming with youth, they also feature older veterans who affect games or can calm the youngsters on-court.

For the Kings, the trio of Zach Randolph, George Hill, and Vince Carter are still productive and act as mentors on and off the court. In the case of  Carter who plays primarily off the bench, he serves as an on-court coach and his calming effect is palpable. In review of the 76ers game although Hill was out Randolph delivered 27 points and 5 rebounds. Conversely, Carter’s stat line doesn’t do justice to his effect on court although he ticks off all the tangible categories outside of points (3 boards, 3 assists, 2 steals, block with no turnovers).

The veteran tasked with leading Brooklyn is DeMarre Carroll who provides production and leadership. And, while Allen Crabbe is just a five-year player he can be considered a young vet with the experience of winning in Portland.  Despite the loss to the Pacers, Crabbe looked solid scoring 17 points hitting 4 of 6 three-point shots.

Ultimately, Carroll will need to be better for the Nets veterans to counter the Kings vets.

Oddsmakers predictions have the Nets favored by 5.5 points and an over/under of 207 points. Factor in the Kings played last night and the Nets have been off since Sunday, so they have the rested legs. Another key to consider is the Kings have played five previous back-to-back sets this season and lost the second game in every outing.  Notably, the Nets are 7-3 in the last 10 head to head meetings.