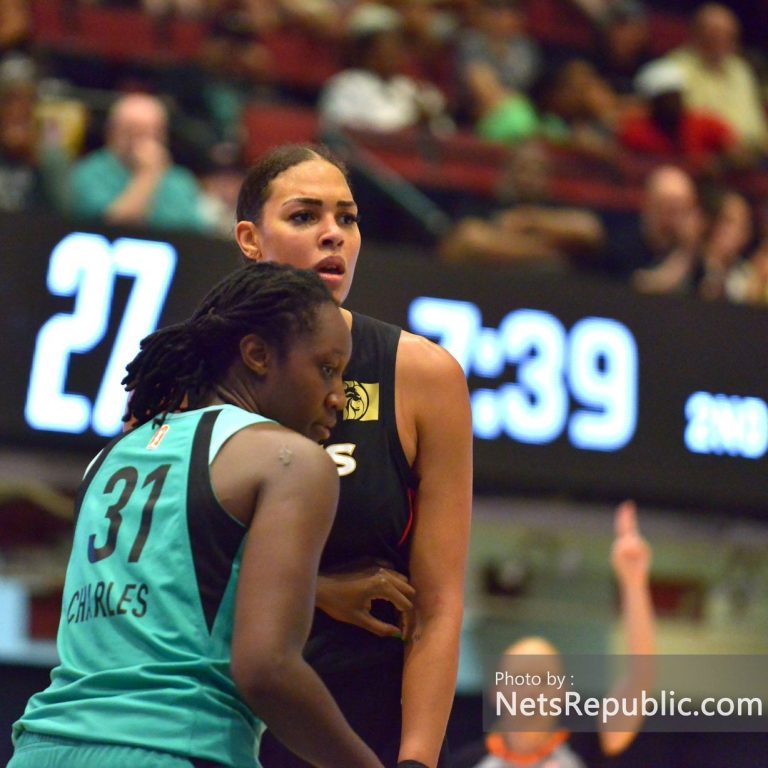 If the New York Liberty had one offseason goal it was to find Tina Charles help. With Kia Nurse expected to take a leap forward in her second-season and Asia Durr deemed pro-ready, the Liberty allowed key contributors Epiphanny Prince, Shavonte Zellous, and Sugar Rodgers to walk. However, Nurse is still struggling with bouts of inconsistency and head coach Katie Smith has yet to integrate Durr into the rotation. Still lacking a go-to second-option, the Liberty, as a direct result, are 1-4 to start the season. But that hasn’t stopped Tina Charles from doing, well, Tina things: dominate in spite of the lack of talent around her.

The 10-year veteran’s game has always been about creating advantage: launching shots from above her head, using adept footwork to prance around defenders, willing her way through double-teams. And this season, the Liberty’s all-time leading scorer has not only made fools of some of the league’s premier defenders (Nneka Ogwumike, LaToya Sanders, and A’ja Wilson) but frustrated opponents defensively (from Candice Dupree and A’ja Wilson to Nneka Ogwumike and Elena Delle Donne). To that end, sure, Reshanda Gray and Amanda Zahui deserve credit for their solid defensive efforts, but when it comes to all-around impact, Tina Charles is in a realm of her own.

“I love playing against the best players. That’s when you can see where you are in your game,” relished Charles. “I look forward to Nneka (Ogwumike of Los Angeles), Elena tonight. I look forward to guarding (A’ja Wilson) on (Sunday).”

Through five games, she’s averaging career-highs in points (23.2), rebounds (9.4), and free-throw makes and attempts (5.8/6.4). Those statistics are not due to any noticeable improvements in her bag, but because the Liberty are more dependent on Charles than ever in her 7-years as a Liberty. More specifically, the main reason for a dip in shooting-efficiency from last season is a career-high usage rate (first in the league) and double the unassisted points.

Charles has to create for herself inside because she is often paired with Amanda Zahui B. While a more than willing three-point shooter, Zahui B doesn’t command respect from deep. She tends to “dive” to the rim after being left unguarded, or, if not, finds herself in the “dunker’s spot.” Wherever Zahui B is positioned, opposing defenses simply don’t have to rotate far to help onto Charles:

Playing Charles as a small-ball 5 provides a solution, specifically next to Reshanda Gray. After all, the most common lineup with Charles at center had an unbelievable 101.8 net rating (Honestly, it wasn’t a particularly small-sample size, either: the aforementioned lineup has appeared in three games and totaled 10 minutes). Where Zahui B is a threat from deep, Gray posts-up down-low, giving Charles space to face-up:

For example, given room to pop or roll to the hoop, Charles capitalizes:

Playing Charles at the 5 would give New York other advantages. Rebecca Allen — who is currently out with a hand injury — could shift to the 4, where her weaknesses as a perimeter defenders would be negated and strengths as a shooter, maximized. Plus, it would allow them keep their best perimeter shot-creators (Nurse, Durr, and Bria Hartley) and three-point shooters on at the same time (Nurse and Durr). Flanking Charles with shooters is crucial:

There is another way Charles can be used as a 5, one that could subtract her massive usage without taking away from her dominance: using her as a screener in a pick-and-roll, mainly with Durr or Nurse. In the below clip, Durr’s pull-up ability gives Charles an open three-pointer:

Having Charles at the 5 entails an uptick in post-up opportunities, which means Charles would have to be able to navigate through even more double-teams. While Charles has improved as a passer, she misses her fair share of simple reads. Considering that most of the Liberty’s offense consists of semi-transition post-ups, Charles needs to take more time to survey the court and make easy passes to (inevitably) open-shooters:

When she pivots and keeps her head up, she completes nice “skip-passes”:

At some point, Tina things becomes an overused phrase, one indicative of not the star player’s luster, but, rather, their team’s lack thereof. If any improvement does manifest, Liberty fans hope it comes from someone other than Tina Charles. Kia Nurse and Asia Durr were primed to be the most likely candidates, yet neither of them realized their off-season promise. For now, then, the Liberty have to maximize Charles in any way possible.

Still, New York Liberty may not have immediate time to experiment, with two games against the 4-2 Lynx, and a game each against the 3-2 Sparks and 2-3 Aces (both of whom are title favorites). Even their easiest game slates them against the 3-2 Chicago Sky, who have been a pleasant surprise.

But Katie Smith may not have a choice; New York is short of options. Asia Durr was given a DNP last game while dealing with an illness, plus EuroBasket is coming up shortly, which leaves Bria Hartley and Amanda Zahui B out of the mix (playing for Australia and Sweden, respectively). Unless Han Xu or Nayo Raincock-Ekunwe earn rotation minutes, though, Zahui B’s absence should open up minutes for Charles at the 5. Aside from Sylvia Fowles, the Lynx lack centers. Staggering Charles as a 5 (in spurts) against them should work.

To be fair, Charles needs to return the favor, specifically with deft passing out of post-ups. She’s already a top-five player in the league, and on track to earn more than a few MVP votes. Any improvement would help. If everything falls into place, Tina things can become more than a buzzword.