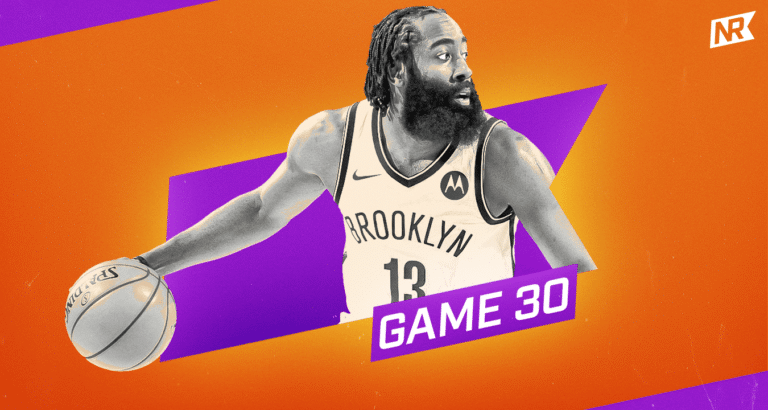 Three Takeaways from the Brooklyn Nets’ Victory over the Phoenix Suns

There’s a saying that the game is not over until the clock hits 0:00. Tuesday’s thriller between the Brooklyn Nets and Phoenix Suns is a prime example why. Already undermanned, the Nets were dealt another blow to the injury report, as Kyrie Irving was ruled out for the game due to lower back tightness. This made a tall task increasingly difficult as the Suns were red hot, riding a six-game win streak. The game started out ugly, as the Nets’ lack of star power and defense were the bane of their existence, as the Suns could not miss, scoring 75 points in the first half and putting the Nets in a 75-54 deficit. However, the Nets dug deep and came out in the second half playing aggressively, turning a deficit as large as 24 into a four-point 128-124 victory, with James Harden hitting the go-ahead three-point bucket.

Next Man Up Mentality For The Brooklyn Nets

Without Kevin Durant and Kyrie Irving, the Nets needed their role players to step up and help produce alongside superstar James Harden, who scored 38 points to go along with his 11 assists. Every Nets player who touched the floor answered the call. After a quiet first half, the sharpshooting, always-reliable Joe Harris came alive in the 2nd half, making the most of every opportunity by finishing with 22 points and going 4/9 from three.

Much maligned role players Landry Shamet and Tyler Johnson were also huge contributors. In his first start this season, Tyler Johnson continued his solid production by having his best performance in a Nets uniform to date, and getting revenge against his former team, scoring 17 points and going 5/8 from three. Landry Shamet continued his upward trajectory as a key role player by adding 13 points to the board. The box scores do not do enough justice, as the Nets moved off-ball well and found open spots on the court to take good, high percentage shots. As James Harden said in his post-game press conference, “This is the true definition of a team; one man, two man goes down. Next man up.”

Defense When It Matters

The biggest criticism of the Brooklyn Nets will always be their defense. In the first half, it looked like the defense would cause the Nets to lose after allowing the Suns walk all over them to 75 first-half points.

However, in a tale of two halves, the Nets suddenly put the clamps on and played excellent defense in the 2nd half, even spicing it up and playing zone defense at times. The Suns were only able to put up 49 points on the Nets defense and struggled to shoot, as they were limited to 44.2 percent from the field. Despite the lack of size, the Nets outrebounded the Suns in the second half 23-13, and 37-34 for the entirety of the game.

The defensive highlight of the night belongs to Landry Shamet. With the Nets up two with less than thirty seconds to go, the Suns set up an after-timeout play for Suns shooting guard Devin Booker to post up Landry Shamet in the paint. Booker’s shot attempt missed off the rim, as Shamet refused to back down and give room to shoot, and kept his hands straight up to contest the shot instead of swiping down at the ball.

When the Nets play with effort and aggressiveness, it usually translates to a Brooklyn Nets victory. In their second-half surge, the Nets continued to fight and play aggressively on both ends of the floor, and put everything on the court for the victory. Tyler Johnson’s post-game conference quote put it best. When asked about playing defense undersized, Johnson replied, “Gotta have some heart.” That heart is what the Nets need to consistently play with as they continue to string together wins.

With the win, the Brooklyn Nets now sit firmly in the second seed in the Eastern Conference with an 18-12 record. Against teams with a record .500, they are now 10-1, and 8-1 on national television.