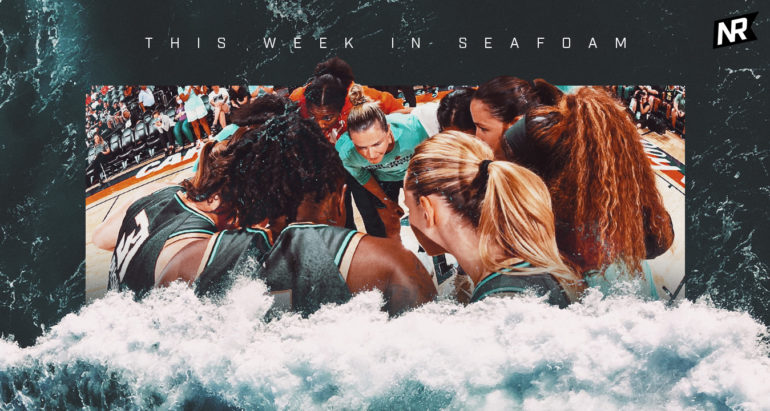 This Week in Seafoam: Where the Liberty Are at the Break

The All-Star Game (and the weekend activities related to it) have come and gone. The WNBA season is getting ready to restart. So, where are the Liberty sitting right now? Let’s take stock of this team at the break, plus look at some All-Star headlines.

The Liberty and the second-half playoff chase

I tried to do a mailbag for this week’s column but I only got one response, so instead, I’m just going to go long on one of the most fascinating things heading into the second half of the season: the playoff chase.

New York looked destined for the lottery and for either the best or second-best odds in the upcoming Aliyah Boston draft. But the simple move of signing a point guard changed the team’s fortunes, turning the Liberty from a team that was in contention to be the league’s worst to a dangerous team that can win any night… though they often fall short of that.

Heading into the second half, New York is such a hard team to pin down. Sabrina Ionescu can go out there and just decimate an opponent: she’s averaging 20.1 points, 7.4 rebounds, and 6.6 assists per game in wins this season. When Ionescu is having one of those games, New York is tough to beat.

But the problem is that she doesn’t always have those games. In New York’s 13 losses, she’s averaging 15.3 points per game on 38.9 percent shooting, almost 10 percent worse than in wins. She shoots under 30 percent from deep in losses, but 45.5 percent in wins.

That inconsistency isn’t unique to Ionescu.

Simply put, when New York loses, they’re pretty bad when compared to the rest of the league.

And when the team wins, they shoot 47.7 percent from the floor, fourth-best among teams in victories. There’s a pretty stark difference here: it’s not like New York maintains its level of play and the losses are just about how the ball bounced. The team averages 14.5 points less in a loss than in a win.

That’s the biggest thing going forward: finding consistency. And that should be easier in the second half, as the team will have Marine Johannès for all of it. New York is 5-5 since Johannès arrived, and her 12.1 points and 5.3 rebounds per game in the eight games she’s started have provided a really nice boost to this team.

As far as how the standings look, New York is currently the 10 seed. At 9-13, the Liberty are a game back of eight-seed Dallas.

Five teams have run away from the field when it comes to the playoff battle. One team has dropped so far back that they’re virtually out of it. That leaves three playoff spots up for grabs and six teams vying for them.

New York definitely shouldn’t be considered the favorite for one of those spots. The team will play its next six games against teams over .500, and while it then ends with eight in a row against teams that it’s currently competing with, the potential for New York to be in a hole by the time it reaches the Mercury game on July 31 is concerning. And if it does struggle over this stretch, the team won’t be able to afford to have its consistency and turnover issues over the final eight games.

All in all, I would say the outlook going forward for the Liberty this season isn’t great. They have the talent to be a playoff team, but it won’t be easy at all.

The Liberty were well represented in Chicago this weekend for the All-Star festivities.

Sabrina Ionescu won the Skills Challenge. She was paired with NC State commit Zoe Brooks as the league tried out a new format that paired WNBA players with EYBL players who were in Chicago for the Nike Nationals.

In the All-Star Game itself, the Liberty had two representatives. Ionescu started for Team A’ja Wilson, while Natasha Howard came off the bench.

Ionescu played 22 minutes, going six-for-10 with 19 points, six rebounds, and six assists. She made five threes and one from the four-point circle. It wasn’t a triple double, but it was still a good showing for Ionescu against the elite players in the W. She was a +21 in the game, tied with Candace Parker and Kelsey Plum for a game-high.

(Quick aside: Ionescu and Kelsey Plum playing together would be fun. Plum is a free agent this offseason and that could be a lot of exciting offensive basketball.)

As for Natasha Howard, her selection to the ASG was a little surprising, especially with her getting the spot over Ezi Magbegor. Howard played 14 minutes, going three-for-seven with eight points, two rebounds, and one assist. It was a solid showing from Howard.

This Week in Seafoam

Alright, now to look ahead to the rest of the week. The Liberty play twice this week:

The Liberty actually play three of their next four games early in the day. I won’t even get to see Thursday’s game because I have an appointment to get my driver’s license—I, uhh, didn’t think to check the WNBA schedule to see if there would be a game happening at 10:00 a.m. Central when I made that appointment.

Anyway, the Liberty get the Aces at a good time, maybe. Vegas struggled before the break, which includes a 116-107 loss to New York last Wednesday.

Ionescu had a triple double in that one and the Liberty played one of the most complete offensive games I’ve seen in a long time. Han Xu had 24 off the bench.

But… well, it basically took the perfect offensive game to win that one by nine points. And Vegas has now had the All-Star break to slow down and get back on track. Vegas has the personnel to just absolutely crush teams. That New York win last week doesn’t really mean much when projecting these two games, because so much went right for New York, to the point that I wonder if all of that isn’t replicable.