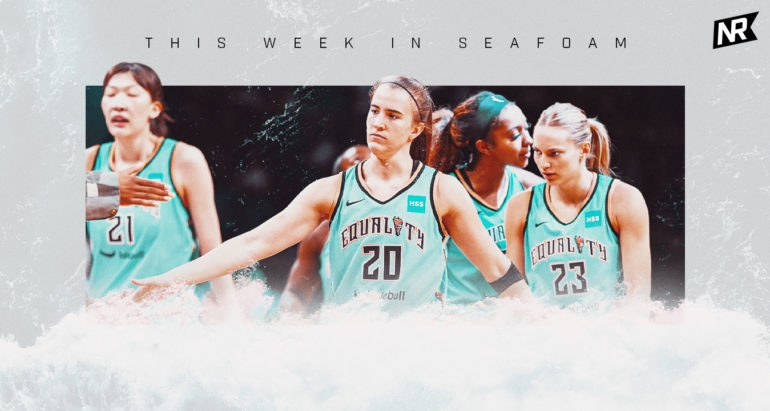 Welcome back to This Week in Seafoam, our weekly look at how the New York Liberty have been doing.

This week, the team went 1-1, beating the Mystics 77-65 before losing 81-72 to the Storm in a game that was closer than that final score line indicates.

New York remains firmly in the hunt for the No. 8 seed in the WNBA and has another two-game week on the horizon.

How the new starting five is doing

With Rebecca Allen (concussion) out, the Liberty have used a new starting lineup for the past two games. The frontcourt of Stefanie Dolson and Natasha Howard remained the same and the backcourt of Sabrina Ionescu and Crystal Dangerfield did as well, but Marine Johannès moved into Allen’s starting spot.

Playing Johannès at the three is interesting. Sandy Brondello essentially sized the lineup down some, going with three guards plus her two bigs instead of using someone who is more of a traditional three like Allen is.

So, let’s quickly dig into some lineup data to see how this unit has played. Numbers are all via PBP Stats.

Comparing that to other starting lineups for the Liberty, we see that the Dangerfield plus Allen lineup has also performed well, with a 22.66 net rating in 69 minutes. The lineup with no Dangerfield but with Sami Whitcomb has a -23.33 net rating.

Johannès at the three hasn’t actually had too much of an impact on how New York is playing, which is good: the team was already playing really well with Allen starting there, so being able to put a guard in at the three and barely lose any production is a positive, in my opinion.

And I think this also reiterates the importance of playing Ionescu with a playmaker. That lineup with Sabrina at the one plus Whitcomb and Allen that started some games? It struggled. But if the team had chosen to start Whitcomb over Johannès right now, I think things would still be fine. The 24 minutes of that lineup has a positive net rating. It’s less about how starts at the three and more about making sure Ionescu isn’t the only ball-handler in the backcourt.

DiDi Richards is back

After missing much of the season with a hamstring injury, DiDi Richards is back.

But her return brings with it a big question: what will her role be? Here’s what Richards told Nets Republic’s Myles Ehrlich earlier this season:

“One of my strengths has always been passing. Sandy’s good about telling me that. On our first day, when she we first met and we had our first individual with the scout guys, she was like, “I think I forgot how good you pass the ball.” But I was like that’s kind of what I was known for at Baylor. So, just bringing it to the next level while implementing my new scoring abilities and everything else that I’ve been able to add to my game has been great for me and great for Sandy to see, so I’m just hoping that I’m able to do whatever she needs me to do whenever she needs.”

What that suggests to me is that Sandy Brondello originally conceived of Richards as being a backup ball-handler this season. But a lot has changed from the start of the season to now. New York added a point guard. It added a secondary ball-handler. There simply isn’t a need for Richards to perform that role now.

So, what role will she play?

In college, Richards was best known for her defense. Playing in a Kim Mulkey system, she rarely spent time behind the arc and the main thing Baylor needed from her before her senior year was to go out there and pester offenses. Then, out of necessity, she had to be a point guard as a senior, because Baylor didn’t have someone to play that role.

One encouraging thing we saw from Richards last season was that she developed a three-point shot. She shot 10-for-22 from deep, showcasing some offensive skill that we never saw out of her in college.

But in her first 17 minutes this season, Richards hasn’t attempted a three. Heck, she doesn’t officially even have a field goal attempt on her record.

In her first game back on Sunday, she played 13 minutes, scoring one point from the line and adding four rebounds and one assist.

Looking at WNBA.com’s rotations, we see that Richards played for spurts in each quarter. And she did serve as a guard in some of those stints. She played in the first quarter beside Johannès when Ionescu and Dangerfield both sat. She played at the three in the second quarter with Johannès and Ionescu. She was also used at small forward for her third and fourth quarter stretches.

Her one assist against Seattle came on the play above. It’s a fun little design, with Richards inbounding the ball, then getting it back on the handoff and then getting it to Johannès, who drives in for the layup. Lots of fun movement on this play that gets the Storm out of position: the advantage of having multiple players on the floor who can handle the ball.

But even this play leaves me wondering what DiDi’s role is. Having a capable third ball-handler on the floor is cool, but is she going to start getting involved in catch-and-shoot looks? Or will she be more of a defense-only specialist? Is she a small forward version of Brianna Turner? Was last year’s shooting real?

It’s going to be interesting to see how Brondello continues to get Richards involved in this offense.

Two games on deck for New York this week:

Road games are always tough. Connecticut is 7-2 at home and 12-5 overall this season. The team’s size can really bother a team like New York, as we saw in the last meeting when Connecticut won 92-65.

That was a different era of Liberty basketball, though. The team hadn’t yet made the backcourt shift that unlocked Ionescu. There wasn’t a backup point guard on the roster at that stage, and Betnijah Laney played 32 minutes. It’s really hard to use that game as evidence of anything for this game.

And then is the Atlanta game. If I’m New York, that one scares me. A lot.

AD has gotten a chance to actually play in Atlanta and the extra time on the floor seems to be paying off. They look the best they have since 2019.

And you know what that means: yep, it’s AD REVENGE GAME time. The Liberty should be very concerned.