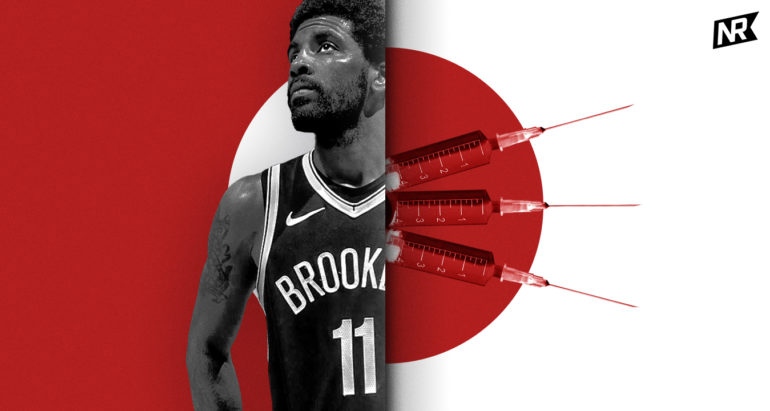 The Struggle of Being Pro-Vaxx and Pro-Kyrie Irving

I want to quickly preface this article to say that I believe it’s everyone’s responsibility to get vaccinated against COVID-19. Whether it be for their own safety and for the safety of the people around them. However, the subject of this article isn’t whether people should get the vaccine – because they absolutely should – but the question I want to discuss in this post is the question of personal choice.

It’s been a couple of weeks since a Rolling Stone article by Matt Sullivan came out entitled ‘The NBA’s Anti-Vaxxers Are Trying to Push Around the League — And It’s Working’, which painted Brooklyn Nets’ All-Star shooting guard Kyrie Irving as, at best, a vaccine-skeptic and worst, a full-on conspiracy theorist who believes that “secret societies” are implanting vaccines in a plot to connect Black people to a master computer for “a plan of Satan”. That’s quite the range of possibilities.

This cloud of uncertainty was exacerbated when Irving didn’t physically attend Nets Media Day at Barclays Center. Instead, he joined reporters via Zoom and his own Instagram feed. New York City law requires all athletes and staff to have had at least one dose of a COVID-19 vaccination to participate in team activities. Although Kyrie didn’t divulge his vaccination status, all signs pointed to him not being vaccinated.

Now, with pre-season underway and the Nets set to take on the Bucks at Barclays Center, Shams confirmed that the Nets listed Kyrie Irving as ‘out/ineligible’, marking the first home game Irving will miss due to NYC’s vaccination requirement.

So as a Nets fan who is pro-vaccination, where does that leave us morally with Kyrie Irving?

Naturally, we’re going to want to side with and root for Kyrie. He’s a hometown hero who’s playing with two other stratospheric megastars and a plethora of talented complementary pieces to bring an NBA Championship to Brooklyn. But it seems like we may have vastly different views about this particular issue. Here’s how I’m squaring it away in my conscience; the issue is not with vaccination, but the issue of personal choice.

Do I think that NBA players should be made to get vaccinated against their will? No.

Do I think the NBA is within its rights to impose restrictions on unvaccinated players? Yes.

In short, players are free to make their own choices but must abide by the consequences of those actions. Should Kyrie decide to forego the vaccine entirely, then he has to be at peace with the fact that he can’t play home games, he can’t leave his hotel during road trips, and he has to sit in different parts of the plane or bus while traveling with his teammates.

There were some other notable examples of NBA players who made their vaccine hesitance known at their own teams’ media day, such as Bradley Beal, and those who strongly advise against having a league-wide mandate for player vaccination, Kyrie’s plea for privacy makes him fall somewhere in the middle. For all we know, he may very well have strong views about microchips, 5G and supercomputers. He could, just as plausibly, by dangling the media on metaphorical puppet strings and turn up at the Barclays Center with no problems at all when he’s good and ready.

The most annoying part of this whole saga is that we just don’t know what the situation is. Kyrie has asked us to respect his privacy, and as frustrating as that can be for fans, we must see these players and human beings with their own lives outside the NBA microscope. Although their day job comes with the responsibility of media availability, being beamed into our homes through our TVs and splashed across billboards on our city streets, they must be allowed some semblance of privacy.

We know that fandom makes hypocrites of us all. Had Kai still been a Celtic or a Cavalier our perception of him would undoubtedly be different. We’re quick to scoff at the Jonathan Isaac‘s of the world, but when the challenge to your moral compass comes from within your own team you’re forced to be more understanding.

As a Nets fan, I wish Kyrie would get vaccinated, but if he doesn’t, the show must go on.