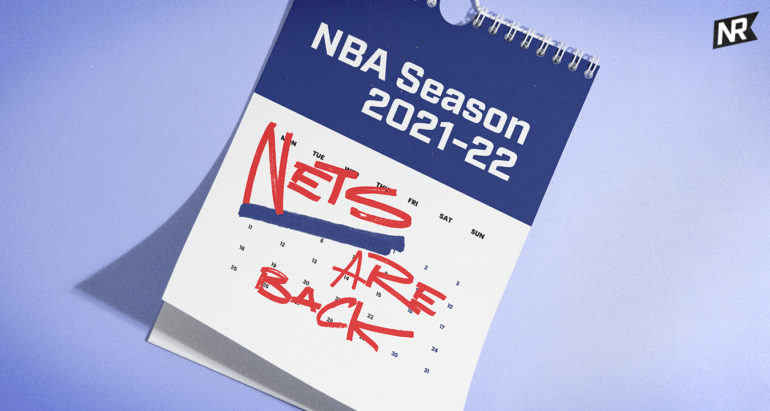 Mark Your Calendars — Important Dates for the 2021-2022 Nets Season

In just a few weeks, the NBA season will kick off with none other than the Brooklyn Nets taking on the Milwaukee Bucks. But aside from that showdown on October 19th, what other dates do you need to keep track of on the Nets schedule? Get ready to (Sean) Mark(s) your calendars, here are the key dates for the Nets this year:

As previously mentioned, the Nets play at Milwaukee for their first game of the season. After a heated seven-game series in the second round of the playoffs, every Nets fan (and player as well, probably!) wants to show that if Kyrie Irving and James Harden hadn’t gotten hurt, the Nets would have handled their Brew City opponents. This, hopefully, will give them that chance.

The Nets will travel to Philadelphia to play the 76ers on October 22nd. Last year, the Nets and 76ers were the top two teams in the Eastern Conference, but we never quite got to see a full battle between them. Their first meeting was won by the Nets, but neither Irving nor Kevin Durant played, and the team had yet to trade for Harden. The second matchup was a significant win for the City of Brotherly Love, with Harden being the only of the Nets’ “Big Three” to play, and none other than Timothé Luwawu-Cabarrot leading the team in minutes played. Philly barely pulled out a win over Brooklyn in their third meeting; of the Big Three, only Irving played. This early matchup will be the first time that (health permitting) Brooklyn’s dominant trio takes on Joel Embiid and company.

Lastly for our early battles, the Nets will host the newly revamped Miami Heat on October 27th. This will be a chance to see both how the gritty Miami Heat defense will match up against the nearly unstoppable force of the Brooklyn Nets offense. Plus, PJ Tucker will again draw the assignment against Durant.

Brooklyn will host multiple former Nets at Barclays Center for the first time since they departed the team.

Many hoped Spencer Dinwiddie would be able to return to the Nets during their playoff run after partially tearing his ACL early in the season. While that wasn’t the case, Nets fans will still get to see him in Brooklyn again on October 25th—except this time as a member of the Washington Wizards. A tribute video should certainly be in store for the five-year Brooklyn veteran.

On October 29th, Caris LeVert and the Indiana Pacers will be in Brooklyn for the first time since LeVert was traded for James Harden. A tribute video will likely be in store for the 2016 first round pick who averaged 13.1 points in his four and a bit years with the Nets.

Jeff Green and the Denver Nuggets will come to town on December 19th. Green will wear colors other than black and white after averaging 11 points while shooting 41.2 percent from three last season. Green was not re-signed this offseason, and he might throw down some highlight-worthy dunks on his former team as payback.

Recently traded and bought out, DeAndre Jordan will come back to Brooklyn on January 25th along with the Los Angeles Lakers. Despite his two seasons with the Nets, Jordan’s return will be far from the biggest story of this game—one of the teams aiming for a clean sweep in the season series will probably dominate the pre-game headlines.

Landry Shamet played some playoff minutes for the Nets last season, and he’ll come back after being traded to the Phoenix Suns on November 27th.

As for some of the, well, less impactful Nets, Luwawu-Cabarrot will be in Brooklyn on November 3rd with the Hawks. Chris Chiozza could come alongside the Warriors on November 16th, though it’s possible that he would be with the G-League team at that point barring any terrible injury luck for Golden State. Net-for-four-games Tyler Cook will be back with the Bulls on December 4th (and as I write this sentence, I fear I may have gone too far down this rabbit hole). That same day will also mark the return of fan favorite Alize Johnson, who was waived this offseason to make space for Paul Millsap and LaMarcus Aldridge. Just signed by the Toronto Raptors, Reggie Perry will look for revenge on his former team on December 14th.

Patty Mills played 10 seasons and won a championship with the San Antonio Spurs. Aldridge played five-plus seasons with the Spurs, and was an All-Star in three of those years. In what will certainly be an emotional matchup, Mills will play alongside Aldridge in San Antonio for the first time since leaving the team on January 21st.

The Nets will show down with their Atlantic Divisional and out-of-division rivals a total of 22 times throughout the season.

The strongest rivalry for the Nets are their crosstown counterparts the New York Knicks. The two teams will play their own version of the Subway Series at MSG on February 16th and April 6th, and at Barclays Center on March 13th and November 30th.

The Nets and Celtics have a long and storied history, including the infamous 2013 trade that derailed Brooklyn for multiple years. Now, after a first round playoff series and all the drama involving Kyrie Irving, a formerly dormant rivalry seems to be heating up again. Irving and the Nets will visit Boston on November 24th and March 6th, and will host them on February 8th and 24th.

After Vince Carter’s trade initiated the rivalry, the Nets and Raptors have met in the playoffs three times. Brooklyn will travel north on November 7th and March 1st, while Toronto will come south on December 14th and January 26th.

As previously mentioned, the Nets and 76ers didn’t have many good chances to put up a full-strength battle last season. This time they’ll have two to do so in Philly on October 22nd and March 10th, and two in Brooklyn on December 16th and December 30th.

The Nets and the Bucks have a new rivalry brewing as arguably the two best teams in the East currently. Though they may have faced off in the Summer League, fans are still likely eagerly anticipating another showdown between the two teams. The matchup will be in the Cream City on October 19th and February 26th, and in the Borough of Trees on January 7th and March 31st—the former of which will be the first time the Bucks have played at Barclays Center since they sent the Nets home in Game 7. Let’s all hope for a fired up Nets crowd that day.

The two prohibitive finals favorites in the Lakers and the Nets will play in L.A. on Christmas Day and in Brooklyn on January 25th. Each of the teams has its own Big Three, many of whom have history with each other. Plus, the two teams have each put together impressive supporting casts full of veterans. Each showdown should be full of entertainment.

A six game road trip normally sounds quite daunting, but from November 5th to 14th the Nets will have a road trip that should allow them to load manage. The six teams they will be playing had a collective record of 152-280 and a win percentage of 35 percent last year. The schedule goes as follows:

On January 1st, 2022, the Nets will kick off the new year (hopefully a championship year!) at home against the Clippers.

With the NBA’s trade deadline tentatively set for March 25th, March 23rd at the Grizzlies will be the last chance for Sean Marks to assess the needs of the teams and what can be improved. A trade acquisition could make their debut at home against the Hornets on March 26th, while a buyout add could join the team during their homestand against the Piston on March 29th or the Bucks on March 31st.

At the start of April, the Nets will play the three teams involved in the James Harden trade over the course of four games (vs. Rockets on April 5th, vs. Cavs on April 8th, vs. Pacers on April 10th). Not particularly important, but I found it worth noting! The aforementioned Pacers game will be the Nets regular season closer.

June 17th is scheduled to be Game 7 of the NBA Finals if needed—which we can only hope will be the date that the Nets clinch their first franchise NBA championship!