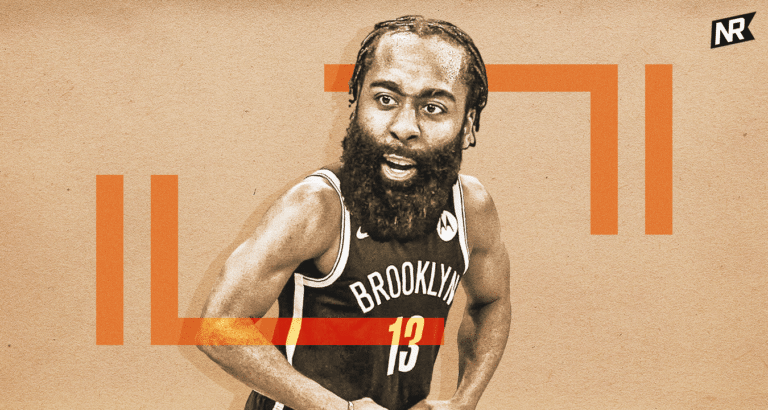 The Brooklyn Nets Are Nearly Unrecognizable – James Harden Is Not

The new era is officially upon us; these new-look Brooklyn Nets are nearly unrecognizable for resident fans of the franchise. However, James Harden’s play is very much so familiar.

It has been a long seven games since the Brooklyn Nets acquired James Harden. The sparkling 5-2 record since the trade doesn’t begin to tell the full story. It’s been two weeks of emotional television, each game stressful and exciting, the whole experience surreal. It is still a struggle to grasp Harden is a Net, even that Jarrett Allen is in Cleveland, despite the constant reminders. But through it all, we haven’t learned much about the new-look Nets. Nothing that wasn’t clear the moment Harden became a Net, anyway.

Brooklyn will need to shore up its rotation before playoff time and is expected to so. Timothé Luwawu-Cabarrot and Reggie Perry cannot play real minutes in the 2021 NBA playoffs, that’s not a shock. DeAndre Jordan cannot be the only ‘traditional’ center worthy of minutes. The defense will improve, the question is how much so? And, obviously, the Nets’ offensive firepower raises their ultimate ceiling, as well as their regular season floor. Every look at the basket the team gets in crunch time is a good one. Who would’ve thought? James Harden’s first fortnight in Brooklyn hasn’t revealed anything, it’s been a reminder: The Beard is a basketball supernova.

It’s a fascinating dynamic to watch the team Kyrie Irving and Kevin Durant staked their claim to have to re-adjust on the fly. Irving and Durant arrived in Brooklyn with goals, both personal and professional, summed up by a desire to win a championship, their way. In walks James Harden, with talent so immense it seems even Irving and Durant have realized that sometimes, it’s best to get out of the way. Particularly so when they, as well as Joe Harris, provide value just by standing around the three-point line:

It makes too much sense. How can Jordan diving to the rim with three elite shooters around the perimeter not guarantee a great look. The above play features a slow-developing roll by DJ, but it doesn’t matter. There’s no help to speak of in the paint area. If there was, James Harden would fire a dart to a > 40% three-point shooter in the corner. This play alone is the foundation of an elite offense, a lifeline Brooklyn can call anytime.

The Nets have also been fond of using Joe Harris to screen for James Harden, early in possessions. It puts defenses in no-man’s land; switching the screen is asking for trouble, but how else do you contain Joe Harris popping to the arc?

Joe Harris ambushes Kevin Huerter. Before the Hawks can even realize what’s happening, Harris has dragged Huerter away from the play, and James Harden is quickly putting Trae Young out of his misery. As a bonus, Jeff Green‘s presence in the corner means John Collins is just a hair late to help at the rim.

Coach Steve Nash called this play out of a timeout, down three with three minutes to go. Neither Kyrie Irving nor Kevin Durant even sniffed the ball. And yet, it was a great, simple choice that resulted in a bucket. Give James Harden a three-point shooter like Joe Harris, and he’ll figure the rest out. No amount of rotational depth replaces what he does. On a floor with two hall-of-fame offensive talents, you still have to let him run the show.

Kevin Durant could still win the MVP and has been finishing possessions every way imaginable. Shooting off of screens, punishing switches, making the extra pass, handling in the pick and roll, he does it all. That hasn’t changed with James Harden in the black and white. And neither has Kyrie Irving’s game. His isolation-heavy game is efficient to the point where it doesn’t muck up the offense. There are natural actions Brooklyn can run to flow Kyrie Irving into 1-on-1 situations, where he has all the confidence to go to work. Sometimes, though, nobody else needs to touch the ball, and that’s okay. Irving has the freedom to attack any time he wants; if he shoots the ball, it’s a win for the offense.

None of this changes the fact that James Harden drives the Brooklyn Nets offense. That doesn’t mean the three stars won’t play off of each other though, far from it. The elite long-range shooting of Irving and Durant is even lethal when James Harden is on the court, he finds his shooters from any angle at any time. And there is a myriad of actions Steve Nash can use to allow Irving or Durant to play off of Harden’s brilliance. An early favorite has been to clear out the right side of the floor for a Harden-KD pick and roll. Durant has gotten a clean, mid-range look every time it’s been run:

Brooklyn has hardly scratched the tip of the iceberg. They have about fifty more games before the playoffs begin to nail down what their identity is, apart from simply having more talent. The ball is going to be in James Harden’s hands for long stretches of those fifty games. And not because he’s learning to play with new teammates, or vice-versa. And not because he’s taking precious touches away from his new co-superstars, either. Rather, if you trade for James Harden, you buy the full James Harden experience. Otherwise, it’s a waste of time and resources.

The Nets did not trade for James Harden to put the finishing touches on a championship roster. This isn’t the Bucks rejoicing over the addition of Jrue Holiday as the final puzzle piece that irons out the last kinks in Milwaukee. Brooklyn turbocharged the engine of a luxury car they just drove off the lot. And they had to, simply because they could afford it. The Nets may not be James Harden’s team, but at the very least, their offense is his. Any other arrangement wouldn’t compute.