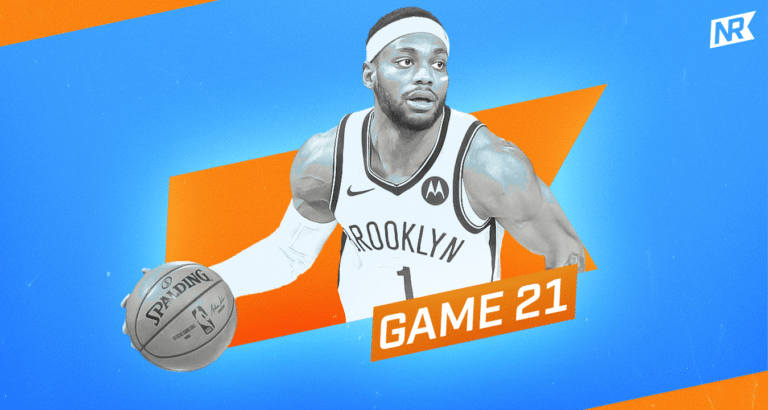 In a game where the Brooklyn Nets’ offense could seemingly do no wrong, a number of rotational players stepped up while the defense continued to experience the issues it’s dealt with all season.

With the win, the Brooklyn Nets extend their winning streak to four games as the offense has been clicking since the disappointing back-to-back losses to the Cleveland Cavaliers. With that in mind, I’ve got three takeaways.

With Kevin Durant resting due to his continued recovery from right Achilles’ tendon surgery, the onus was originally on James Harden and Kyrie Irving to make up for the “‘Slim Reaper’s” absence. However, while those two did what was necessary, it was the contributions from Brooklyn’s complementary players and their bench that sealed the victory. In fact, all nine Nets who played more than five minutes scored in double figures.

Joe Harris bounced back from a 6-point outing against Atlanta by scoring 20 versus Oklahoma City. In doing so, he initiated a new three-point make streak by torching the Thunder with five made threes. Landry Shamet had his best performance in a while, notching 11 points and knocking down three triples. Even Timothé Luwawu-Cabarrot got in on the action, nailing home four deep balls of his own.

Bruce Brown put up an efficient 19 points on 9-11 shooting. He continues to appear unchallengeable around the basket and is often the beneficiary of defensive breakdowns caused by the Nets’ stars. His emergence as a steady rotational piece and fill-in starter has been critical following the Harden trade.

In the frontcourt, Reggie Perry recorded his first-ever double-double, scoring 10 points and corralling 11 boards. Jeff Green hit double digits for the ninth straight game, and, while he experienced his rough moments defensively, Deandre Jordan finished in double figures as well with 10.

When Brooklyn doesn’t need to rely as heavily on its stars, life is good on the offensive end of the floor. Hopefully, when Durant returns, these guys will be able to maintain similar levels of play.

All night long, the Brooklyn offense could do no wrong. James Harden was aggressive from the jump, scoring 17 points in his first eleven 11 on the floor and finishing with another triple-double with 25 points, 11 assists, and 10 rebounds on 9-14 shooting. While he’s been more passive since his arrival in Brooklyn, the former-MVP has found his groove as a scorer of late taking over in the final minutes of Monday’s game versus Miami, putting up 31 points and 15 assists in Atlanta, and scorching the earth in the first and fourth quarters against OKC.

Despite a relatively quiet first half, Irving stepped it up late in the second quarter and held onto his momentum into the third as he scored eight points in the first 2:30 of the second half. Finishing with 25 for the night on 10-16 shooting along with seven assists, Irving called his own number when it was necessary but also found ways to incorporate his teammates and still sustain the Nets’ lead.

There will be nights where Steve Nash will ask these two to do more than they did tonight in terms of scoring the basketball. But, in a game like this, getting guys like Shamet and Luwawu-Cabarrot into shooting rhythms is much more important for Brooklyn’s long term success.

The defense is still an issue

Perhaps masked by the breath-taking offensive performance, the Brooklyn defense struggled mightily against Oklahoma City. Typically, scoring 73 points in the first half, 115 through three quarters, and 147 total would result in a swift snuffing-out of an opponent. But, even when matched up with the Thunder’s mediocre offensive roster, the Nets had trouble shutting the door. In fact, by opening the fourth quarter on a 10-2 run, Oklahoma City pulled back within 13 points before Harden put the game out of reach by taking over on the other end.

The absence of Kevin Durant likely contributed to some of the defensive lapses. Yet, there are still lingering issues. Deandre Jordan’s ball screen defense remains a concern, while Bruce Brown is the only guard who can do much to disrupt his opponent. In fact, the Thunder backcourt had a night of its open as Shai Gilgeous-Alexander went for 24 points on 7-10 shooting from the field and 10-13 from the line while Theo Madelon (who averages 6.3 PPG on the season) put up another 24 off six made three-pointers.

Granted, when the Brooklyn offense performs like it did tonight, team defense is the furthest thing from anyone’s minds. Still, until Brooklyn solidifies its backline with more stable defenders, questions will remain.

All in all, though, winning an NBA game comfortably without one of the best players on the planet is an absolute luxury. Brooklyn now moves into second place in the Eastern Conference as the Nets are 6-2 since James Harden joined the roster.