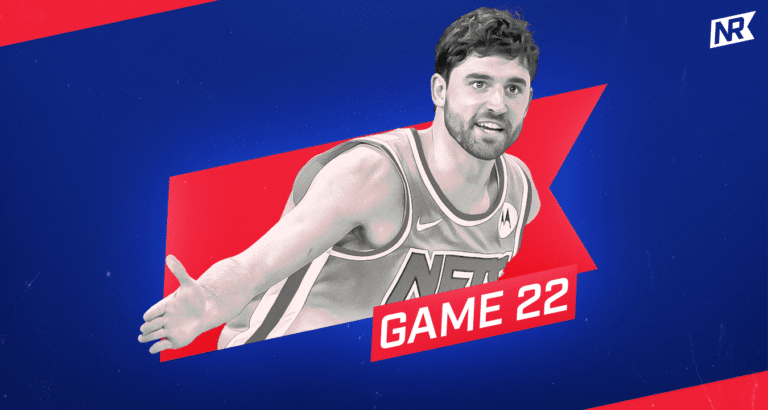 Three Takeaways From the Brooklyn Nets’ Loss to the Washington Wizards

In an instant classic, the Brooklyn Nets saw their four-game winning streak come to an end at the hands of the Washington Wizards.

There was a lot going on in Sunday’s loss. Everything except defense. Besides a promising first quarter from Brooklyn, neither the Nets nor the Wizards were interested in getting stops. How else do two teams produce 295 points in regulation? And yet, it wouldn’t have mattered if not for a disastrous end-of-game sequence where the Nets allowed six points in four seconds. Here are three takeaways from a barn burner where the Nets led for all but the last five seconds:

It’s one matter to allow 149 points in regulation. It’s another to do so after playing excellent defense to start the contest. In some sense, the lack of effort is reassuring for a team like the Nets. Brooklyn looked more like a team eager to escape the last leg of a road trip than one victimized by a lack of familiarity. Sunday’s effort was not the culmination of a series of lackluster defensive efforts, or frustration boiling over. It was an example of a team that checked out after landing the first punch. It’s harder to flip a switch than it is to just leave it on.

There’s hardly an excuse to allow a buck-fifty in regulation, but there are sources of solace for Nets fans. It’s important to note Sunday’s defensive effort is not indicative of how Brooklyn has been playing as a whole. Yes, Brooklyn has been giving up some big numbers, but glancing at box scores can’t provide insight into defensive performance. Particularly so with the pace and three-point shooting modern offenses incorporate. The 120 points Brooklyn has been allowing in and of itself is not cause for concern. 149, though. That’s a different story, and even more nauseating upon learning Washington only shot 31% from deep.

Individual defense is often difficult to scrutinize in the NBA; players have been torching 1-on-1 coverage for decades. But the Nets couldn’t contain any level dribble penetration in the second half vs. Washington. The Wizards collected paint touches as easily as they breathed. Tired legs likely played a part, but effort level did too. In any case, the Nets defense imploded with no interior protection to speak of, and Washington made just enough perimeter shots to tilt the game in their favor.

Sunday’s game didn’t teach us that the Brooklyn Nets can’t play defense, just that they didn’t want to in Washington. As frustrating for fans as that might be, it’s easier to deal with than the inverse. The Nets had been showing defensive progress over the previous ten games since the James Harden trade, where they went 8-2. There’s nothing to do now but regroup and recapture that energy. Every coach and player for Brooklyn knows what the regular-season goals for the group are. For as frustrating as Sunday was, a January loss at the end of a successful road trip can’t be analyzed too seriously. A lapse of focus is a habit that must be eradicated in favor of championship ones. But Sunday’s result, particularly without James Harden, is not a commentary on the Nets. It’s merely a slap in the face.

The Nets are Closing Small

Jeff Green is leading all Nets in fourth-quarter minutes since the James Harden trade. Of course, each of the Big 3 has been absent for at least one game since the Hardening, but still! Meanwhile, DeAndre Jordan has been glued to the pine throughout every fourth quarter, save for 13 measly ticks, since the trade. That amounts to less than three minutes per contest. Once DeAndre Jordan is subbed out of the game in the third quarter, you’re likely not seeing him for the rest of the night. That trend continued Sunday, as Jeff Green played center for nearly the entire fourth quarter.

Coach Steve Nash has been persistent in closing with his small line-up since the beginning of the season. Offensively, it opens up the floor for Brooklyn, and there’s nobody defenses can cheat off of with Jeff Green’s three-point eruption this season. Clutch time offense was never going to be an issue for the Nets this year. With DJ off the floor, it’s unfair for defenses. Since trading for James Harden, the Nets are scoring 32.9 fourth-quarter points per contest. No other team is posting more than 30.1 in that category.

However, Nash’s refusal to give Jordan fourth-quarter minutes may be veering out of hand. As the Wizards continued to drive the lane unimpeded, you have to wonder if DeAndre Jordan playing drop coverage could have patched things up. Sure, that leaves the Nets susceptible to pick and pop threes, but it’s hard to imagine Moe Wagner, Alex Len, and Rui Hachimura beating Brooklyn from deep. Or at least have the same level of success Bradley Beal and Russell Westbrook did repeatedly driving into a vacated lane.

The Nets are Still the Nets

It’s still, of course, hard to compartmentalize such a shocking last-second loss. Especially against an opponent that was 3-12 entering the night, in a game that Brooklyn led nearly coast-to-coast. Appreciating just how absurd the loss was, though, may help everybody move on. These are, after all, the Brooklyn Nets. Snatching defeat from the jaws of victory, losing to a team they “should” beat. These are time-honored traditions unlike any other for this franchise.

The night after the Bulls allow Damian Lillard to make two threes to overcome a five-point deficit in the final seconds, the Nets one-up them. Russell Westbrook makes the game-winning three and lets the whole team, including Kevin Durant, hear about it. After looking entirely disinterested throughout the first half, Bradley Beal goes into attack mode for 26 points in the second half.

If you were worried the super-team version of the Nets would feel a bit soulless, a bit unfamiliar, don’t be. This group has shown they can lose in new, excruciating ways that will remind fans of years past. The ups and downs of a regular-season are amplified this year, but it doesn’t mean the fabric of the team is unfamiliar for long-suffering Nets fans. If there’s any fanbase that should know how not to overreact to individual losses, it’s this one. Especially waking up with three All-NBA talents every morning.

It’s one game. A contest against the Los Angeles Clippers means the Nets have the opportunity to turn this loss into a distant memory and continue to erase questions about their defense. It’s hard to imagine DeAndre Jordan glued to the bench for all fourth quarters from here on out; perhaps that could change as soon as Tuesday? Sunday saw the Nets play a hilarious, exhilarating basketball game. And while it’s unfortunate they couldn’t pull it out, these are still the Nets. What did you expect?