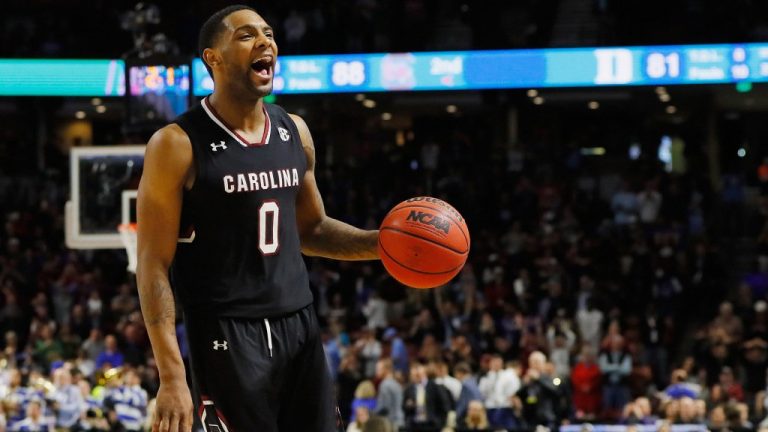 GREENVILLE, SC - MARCH 19: Sindarius Thornwell #0 of the South Carolina Gamecocks reacts in the second half against the Duke Blue Devils during the second round of the 2017 NCAA Men's Basketball Tournament at Bon Secours Wellness Arena on March 19, 2017 in Greenville, South Carolina. (Photo by Kevin C. Cox/Getty Images)
Home
Brooklyn Nets
Nick Agar-Johnson

Sindarius Thornwell Could Be An Instant Contributor for the Brooklyn Nets

Sindarius Thornwell does not have a remarkable amount of upside. The senior will be 23 years old when he plays his first NBA game, and his lack of explosive athleticism puts a hard cap on his ceiling. On the other hand, he also has a very high floor; he has solidified his once-shaky jump shot, and his high effort level and basketball IQ makes it hard to believe that he will not be at least a decent end of the bench option for any NBA team.

The Ugly Duckling Has Become a Swan

It would be an understatement to say that Sindarius Thornwell was inconsistent during his first three years at South Carolina. Thornwell never even cracked 40% shooting from the floor, but even within that sample his accuracy varied dramatically. Thornwell shot 100 or more three-pointers during all four of his seasons as a Gamecock. However, he shot 37% from deep as a freshman—and just 26.8% the following year.

Thornwell appeared to be mired in a slump his entire sophomore year, as he shot only 34% from the floor. Overall, his freshman and junior years that sandwiched his miserable sophomore campaign were quite similar—Thornwell shot 38.6% as a freshman and 38.2% as a junior and averaged 13.4 points per game in both of those years. He traded more efficient three-point shooting (33.3% as a junior as opposed to his mark as a freshman) for slightly better peripheral stats—he boosted his rebounding from 4.1 per game to 4.8 per game and boosted his assists from 3.0 per game to 3.8 per game while cutting his turnovers from 3.1 per game down to 2.3 per game. Nonetheless, he was an inefficient chucker whose only real success was leading the Gamecocks to the second round of the NIT in his junior year.

Everything seemed to click for Thornwell as a senior, as his numbers jumped across the board despite only averaging 0.8 more minutes per game. Thornwell put up 21.4 points per game with 45/40/83 shooting splits. His contributions were not limited to his vastly improved scoring, however. Thornwell grabbed 7.2 rebounds per game, 2.8 assists per game, 2.1 steals per game, and a block per game en route to winning the SEC Player of the Year.

Sindarius Thornwell is a target for the Brooklyn Nets, as he was interviewed by Sean Marks and his staff early in the draft process:

Nets one of 13 teams to interview Sindarius Thornwell of South Carolina, 6’5″ SG. https://t.co/e0Q2sFicPi

Thornwell is currently projected to be the 56th pick by DraftExpress, one pick before Brooklyn’s second round selection via the Boston Celtics. The Nets are a prime candidate to move up in the second round, either via purchasing a pick in the 50’s or by moving their 57th pick and some other asset to jump up in the draft order.

On the surface, it seems as if Sindarius Thornwell would be superfluous for the Nets. They already have two young combo guards in Caris LeVert and Isaiah Whitehead that need playing and development time, and the re-signing of Archie Goodwin further complicates their guard rotation. All of those machinations do not even factor in the non-guaranteed contracts of Sean Kilpatrick, Joe Harris, and Spencer Dinwiddie.

However, Thornwell has one decided advantage over all of those players that makes him worth a more thorough look from the Nets front office—he is a two-way player. While Sindarius Thornwell does not fill a particular hole in Brooklyn’s roster, his mature game and ability to contribute immediately on both ends could make him a valuable role player for a Nets team in need of shooting and experienced bench play.

Offense: From Star to Role Player

Sindarius Thornwell will probably not be able to repeat his 40% mark from deep as a senior in the NBA. However, he has a quick shot that will enable him to generate open looks in Kenny Atkinson’s offense:

Thornwell barely gets any lift on his jump shot—his 30.5” max vertical from the combine is closer to the number one would expect from a big man than what would be expected from a wing player. However, that lack of lift is also an ancillary benefit to Thornwell’s shooting. Since he does not rely on his legs as much as more athletic shooters—one look at Zach LaVine’s jump shot should make that difference quite clear—Thornwell is less prone to losing his shot as the game progresses.

The sample size of three-point shooting in college is normally too small to draw any firm conclusions. However, Thornwell attempted 527 shots from deep in college. That sample is larger than the season-long marks of all but the most prolific NBA shooters. Thornwell’s overall percentage of 34% is not exactly the mark of a sharpshooter. However, if you remove his sophomore slump from the equation that number jumps to a far more respectable 37% from deep.

Thornwell is not a point guard by any means, but he is a decent secondary creator. He is more than capable of making all of the necessary reads to fit in well in Kenny Atkinson’s high octane offense. Furthermore, Thornwell’s spectacular rebounding and solid frame would allow him to slot in as a small forward in smaller lineups. Any guard’s ability to slot in as a forward relies heavily on their defense, and Thornwell’s prowess on that end is ultimately what would earn him a rotation spot ahead of Brooklyn’s plethora of young guards.

Sindarius Thornwell put up some impressive box score stats on the defensive end as a senior. His high steal and block rates, like those of most college prospects making the jump, will follow him to the next level.

However, Thornwell is not just a stat-sheet stuffer. He is a versatile and rugged defender who makes up for his average athleticism with a high defensive IQ and an NBA-ready body. Thornwell is 6’5” and a chiseled 215 pounds, and he complements that frame with a 6’9” wingspan. Although he does not have the same level of speed and explosion as Isaiah Whitehead, his frame is almost frighteningly similar. The two of them could pair up to make a killer defensive backcourt.

If those two were paired with Caris LeVert and Rondae Hollis-Jefferson at forward and a small center (such as Trevor Booker) in the middle, Thornwell would probably be the slowest player on the floor. That lineup would be a nightmare to score against, as Brooklyn could switch basically every screen that would not require LeVert to guard anyone in the post.

Thornwell’s frame will allow him to guard almost any wing player in the NBA. He might even be able to guard some smaller power forwards. Thornwell’s defensive versatility, combined with his versatility on the offensive end, gives him a higher floor than most second-round prospects.

Sean Marks and the Nets staff could certainly be forgiven for passing on Sindarius Thornwell to swing for the fences with any second-round selections in this upcoming draft. Thornwell does not have the athleticism to be a full-time starter. Furthermore, Brooklyn’s wing rotation is already somewhat overloaded and the Nets are not looking to win in the short-term like most teams in the latter half of the second round.

It is still entirely possible that Thornwell’s three-point shooting as a senior was a fluke, even though his high volume from deep and efficiency from the free throw line indicate that his shot will translate. It is also highly possible that his limited athleticism makes him a defensive liability despite being a defensive stalwart in college.

Sindarius Thornwell will not become a superstar at the next level barring an unpredictably large degree of improvement. That being said, has enough of a varied skill set that he will almost certainly find some kind of role in the NBA. The Nets will probably look for a flawed prospect with tremendous upside in the second round. However, they could do far worse than aiming for nearly guaranteed production from Sindarius Thornwell.