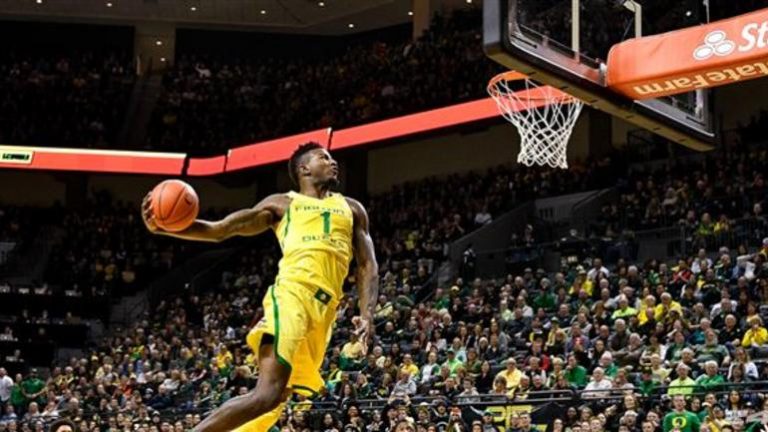 Jordan Bell Could Have An Immediate Impact In Brooklyn

As a team that only won 20 games this past season, the Brooklyn Nets have many holes on the team and the lack of defense is right at the top of the list.  The defense was poor all around and the team was second to last in terms of points allowed (112.5) even though the defense improved towards the end of the season when they played close to .500 for over 20 games.  One of the biggest issues was the lack of interior defense and rebounding which is why it is very likely that Brooklyn will at least use one of the two first round picks on a big man whether at the four or five.

Of the top defensive players available in this draft, Power Forward Jordan Bell out of the University of Oregon is near the top of the list. The qualities that makes him an impact player on defense are his elite athleticism, high motor, versatility, and shot blocking which was evident when he not only helped lead the Oregon Ducks to the Final Four this past NCAA tournament but also took away Pac 12 Defensive Player of the Year honors as a junior. In an interview done with CSNNW, Bell talked about his trip to Chicago for the combine and mentioned Brooklyn as one of the teams that he has been in contact with.

Jordan Bell is listed at 6’9″ and 227 pounds with a 38 inch vertical leap. His physical measurements at the NBA Combine could catapult his draft stock from early second round to possibly late first round, at this time where the Nets have the 27th pick.  As of now, he is projected to be taken 33rd by Draft Express but he could go in the first round with good workouts prior to the draft.

At the Combine he had the fourth fastest shuttle run (2.83 seconds) which is primarily dominated by guards and he also had the third best time for lane agility (10.83) of any power forward drafted as per the Combine database. With such speed and agility, he is a versatile defender who is capable of guarding all positions if necessary.  Switching is a big part of defenses due to frequent pick and rolls as well as screens so having an elite athlete like Bell will improve the team defense with a player who could guard multiple positions the way he can.

The natural position that Jordan Bell played in college was at the four but when Oregon center Chris Boucher went down with a torn ACL prior to the NCAA tournament, Bell replaced Boucher as a small ball center. He excelled as he posted averages of 12.6 points on 73 percent shooting, 13.2 rebounds, and three blocks in 31.4 minutes per game.  He was Oregon’s best player and the Ducks went 4-1 before losing in the Final Four to the eventual national champions North Carolina Tar Heels.

At 6’9″ with a wing span of 6’11” and 227 pounds, he will be undersized as a center in the NBA but he should be able to play the five in small ball lineups which could increase his value in the draft.  Bell is coming off a decent regular season as he averaged 11 points on 63.6 percent shooting along with 8.7 rebounds, and 2.3 blocks in 29 minutes per game.

He clearly raised his level of play in the NCAA tournament and he was a big difference maker especially as the anchor of the defense.  Jordan Bell has a great sense of timing when it comes to blocking shots and he is very good as an individual defender as well as a help defender from the weakside with his speed and quickness.  He made some highlight reel blocks in the tournament and he really displayed his athletic prowess with numerous chase down blocks which probably grabbed the attention of NBA scouts.

Despite his standout play, he had a couple of moments of adversity when he failed to box out on two straight trips to the free throw line by North Carolina in the waning seconds of the game which allowed the Tar Heels to maintain possession in a one point win.

“If I had just boxed out … I had two opportunities,” Bell said. “People can tell me whatever they want, but I lost the game for us.”  He then stated “you play your ass off all season, but in the game that matters and in the moment that matters, I didn’t do my job.”  Bell added “this is going to hurt forever.”

It is good to see accountability from the players and he tearfully accepted responsibility for the loss after the game despite having 13 points, 16 rebounds, and four blocks in the game.

On offense, Jordan Bell shoots for a very high percentage because his game primarily consist s of dunks and layups around the basket as his field goals usually involve put-backs on offensive rebounds or strong finishes from passes in close by his teammates.  He shot 61 percent for his three year career at Oregon and although his offensive game is limited since he is not a good perimeter shooter or post player, he plays within himself and his limitations to contribute offensively.

Bell hardly even attempted 3’s and he only made 18.8% when he did.  As a result, he will be one of those players that will not need plays called for them to be effective and he can do the dirty work that could make the difference in winning and losing.  He also does well in transition and he is a great option on fast breaks because he has the speed of wing players combined with his athleticism to finish as he is simply superior to most bigs in this regard.

With the Nets, Jordan Bell can be useful as a four or five who will impact the game on both ends with his energy level at least as a rotation player. Drafting him would be a step in the right direction to improve the overall defense and rebounding.  Rondae Hollis-Jefferson is undersized at 6’7″ and 214 pounds to play the four and Bell has the talent to be become a difference maker in the NBA.

If he plays next to Brook Lopez as the four, Bell can provide the defensive and rebounding support that is needed since Brook can get exposed in both areas. He will also be another rim protector with Brook, which will make it more difficult for opponents to score inside. If he comes off the bench Jordan Bell could lead the second unit and be the anchor on defense, something he has the potential to be in the NBA.

It remains to be seen if RHJ could be the starting four going forward for the Nets with his lack of size along with his limitations offensively. There is a possibility that either RHJ or Trevor Booker could be traded in the offseason, which will open up a spot at the four. Trevor Booker is solid as a backup power forward but he is making $9 million and a draft pick like Jordan Bell will a much younger and cheaper alternative with upside.

In regards to his offense, Bell’s lack of outside shooting should not be much of a factor if he plays alongside a big like Brook who is a capable three point shooter that stretches the floor in the motion offense.  Shooting is a part of the game that could be improved with repetition and practice, but what cannot be learned is the natural talent that Bell has as a defensive enforcer.

It was painfully evident to see how the Nets really did not have anyone at the four or the five who could finish strong with dunks with the exception of RHJ and Booker at times. It was rare to see an alley-oop or a lob for an easy basket all season long. The three point shot is an integral part of the motion offense but points in the paint are also a focus, in the half court or transition, and will be valuable in improving offensive efficiency.  Jordan Bell could provide this spark if drafted by the Nets with his athleticism and by playing better defense with improved rebounding, it will lead to more opportunities for easier baskets in transition.

One of the main goals for the Nets this upcoming season is to improve significantly on defense in order to be more competitive and possibly contend for a playoff spot with a good offseason.  Defense should be the foundation for any team that is building properly for success in the future and drafting Jordan Bell will bring toughness along with passion as he is an emotional player.  He mentioned Draymond Green when he was asked a question about what type of player he wants to be in one of his workouts and his defensive as well as rebounding ability will be his calling card in the NBA.