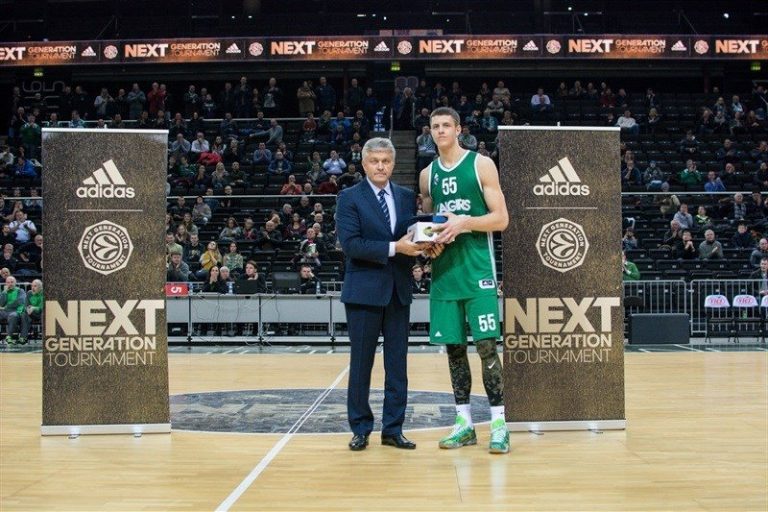 Isaiah Hartenstein Could Grow Into The Stretch Big Brooklyn Is Missing

The Brooklyn Nets are a team looking to duplicate success after hitting on recent late first and second round picks. With two picks in the first round and one in the second, the Nets will have several opportunities to to find a gem. Isaiah Hartenstein could be just that.

The 19 year old is the son of former University of Oregon player Flo Hartenstein, who’s career took him to Germany where he saw success as a player and then a coach. Isaiah moved from Eugene, Oregon to Germany in 2008 and has since burst onto the scene with his size, length, and skill. He is a true seven footer, boasting a 7’2″ wingspan and 9’1″ standing reach. In addition to his impressive frame, Hartenstein has gained over 25 points of solid muscle this season while playing with Zalgiris International.

Hartenstein has had an interesting past few months as a prospect. In addition to slowly seeing more minutes as a professional, he attended the Nike Hoops Summit in his former hometown where he was able to showcase his abilities up close and personal for everyone. What everyone found out was that he is less a three-point shooting, Kristaps Porzingis type player and more like a version of Mason Plumlee that could develop a steady three-point jumper on day down the road after he figures his release out.

Standing at seven feet tall, Isaiah Hartenstein is 250 pounds of rough and tumble. He has a good body for someone as young and as tall as he is. Hartenstein isn’t afraid to throw his weight around or play with physicality, especially when things are going his way. He is an emotional player that is prone to hot and cold streaks based on his mood. Both DraftExpress and NBADraft.net touch on how his confidence can come off as arrogance and that his emotions can still get the best of him due to the pressure he puts on himself.

What he does best right now is rebound, score at the rim, and move the ball. He is very active on both the offensive and defensive boards, averaging 14.o rebounds per 40 minutes. He projects as a decent rim protector, given his 9’1″ standing reach and physical presence in the post. He is agile for his size and could become decent drop defender in the pick and roll. He is an incredible passer for his size, so incredible that NBADraft.net has anointed him as the best passer of his generation.

Isaiah Hartenstein’s NBA future is dependent on how his offensive game develops. His three point jumper isn’t as good as originally advertised after a lackluster showing at the Nike Hoops Summit, but that isn’t the end of the world. It is clear he has the potential to be a good three point shooter, but he needs to iron out his mechanics and work on consistently having the same followthrough. He has a habit of releasing the ball off the side of his hand, leading to an unnatural side spin.

He has put all of his offensive eggs into the perimeter threat basket and it might not work out. He has been able to get away with the poor mechanics due to his level of development compared to other seven footers his age. While he shoots a lifetime 28 percent from three, he is still viewed as heads and shoulders ahead of other stretch bigs in his class. He has no face up game and is under developed in the post for someone with his type of frame. If he doesn’t develop a real three pointer, he becomes extremely one demential on offense.

The calling card to his game has been how skilled of a passer he is given his size, but he still makes a lot of silly mistakes and commits unnecessary turnovers trying to hot dog it with a fancy pass. His footwork on the defensive perimeter leaves a lot to be desired and further limit him. Eight months ago he was a surefire stretch four that could slide over and play the five, but after seeing his shot mechanics and footwork on defense he looks more like a five.

The biggest area for concern seems to be his attitude and his lack of emotional control. He lets his emotions impact how he plays and he seems easily upset. He puts a lot of pressure on himself and there is unquestionably pressure coming from home, given that he is the son of a former pro and current coach Flo Hartenstein. He still needs time to grow and will most likely stay overseas for one to two years regardless of who picks him in the draft, given how raw and young he is.

How He Fits Into Brooklyn

If Isaiah Hartenstein comes over immediately after being drafted, imagine him playing the same role that Iviac Zubac played with the Los Angeles Lakers last season. Zubac wasn’t expected to come over either, but he enjoyed a lot of success and development in a limited role with the Lakers and a gigantic role with their D-League affiliate, the D-Fenders. Hartenstein wouldn’t be able to offer much off the bat outside of rebounding but he could go to Long Island and really see success. Given the success that Kenny Atkinson has had developing newfound three point shots (see Jeremy Lin during Linsanity, Brook Lopez, and Spencer Dinwiddie to name a few), there is no doubt that he could work wonders for Hartenstein’s mechanics and get him ready for the NBA game.

From a long term standpoint, the idea of Hartenstein is the ideal big to have in Atkinson’s motion offense. Again, so much depends on if he can develop a clean three pointer or not. If he does, he can become an incredible complement to Brook at the four. He would space the floor, play with energy, bring length and toughness to a soft front court, and offer consistent defense and rebounding.

If he never develops a consistent three pointer, that isn’t the end of Isaiah Hartenstein: the NBA player. His physical tools, rebounding, toughness, and size will be welcome on any NBA team. He has a high ceiling but also a high floor. He will always be seven feet tall, he will always have a 9’1″ standing reach, he will always be a big body. If he doesn’t get bitten by the injury bug, he should have a serviceable to good career in the NBA regardless of if his shot develops.

He is currently projected to Brooklyn with the 22nd overall pick in the draft and that couldn’t be more perfect. With Hamidou Diallo back at Kentucky, Isaiah Hartenstein should be towards the very top of Brooklyn’s big board. He could end up like possible Rookie of the Year Dario Saric of the Philadelphia 76ers. Get drafted, stay overseas for a couple seasons, then come over to the NBA and make an immediate impact. If I am Sean Marks and Kenny Atkinson, I am taking Isaiah Hartenstein in this draft.