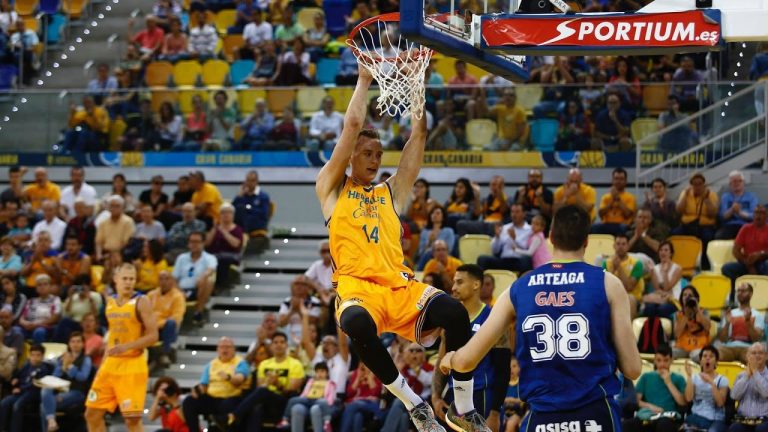 The Brooklyn Nets Could Add Length And Touch With Anzejs Pasecniks

Much has been made of the Brooklyn Nets scouting of overseas talent. Sean Marks has been spotted watching European competition on multiple occasions. Some of that scouting has linked the Nets to Milos Teodosic. But Marks, along with Trajan Langdon, have also looked to the draft and other avenues as well.

Anzejs Pasecniks is a 21-year old center hailing from Latvia. He last played for Gran Canaria in Liga ACB in Spain. Pasecniks stands 7’2’ (and you can’t teach that) and weighs in at 229 pounds. His draft position varies from a mid-first round pick to early second round pick in various mock drafts. The big man is currently slotted #29 in DraftExpress’ latest mock draft and #39 on the Ringer’s Big Board (shoutouts to Danny Chau!)

If drafted by the Brooklyn Nets, Pasecniks could be an ideal Euro-stash candidate.

The “Unicorn” label gets thrown around way too much these days. But it’s all in good fun. I understand. Fans like to put their greatest hopes and dreams and rookies, and that’s understandable. Anzejs Pasecniks could entrust Nets fans with that hope.

The most intriguing part of Pasecniks’ game is his do-it-all ability on the offensive end. Pasecniks shows a tremendous ability to run the floor, bucking the trend of slow big men. He runs in a fluid, straight-line motion, completely comfortable in his huge frame. That leads to some easy finishes in transition, and on the pick and roll. His overall fluidity and coordination extend to his finishing around the rim, where he looks completely comfortable. He shows some good hands catching lobs and is fluid when turning around out of the post. Check out some of those finishes, screens, and general fluidity below…

In today’s NBA, the ability to dive off of screens and move without the ball is imperative for centers. Part of Brook Lopez’s offensive expansion this season was his ability to space the floor with his shooting. Next season, Jeremy Lin will have open driving lanes thanks to Lopez’s ability to knock down jumpers like a 6’6” dude.

A developing (or broken) shot?

Pasecniks, to go with the Unicorn label, also has shown a developing three-point stroke. This season, he shot 44.4% from deep for Gran Canaria. The one caveat is the sample size – he shot only 18 threes, and his previous numbers were uninspiring. He shot below 30% from three in his previous three seasons in both domestic and international competition. The Ringer’s Kevin O’Connor (AKA Sandy Mui’s “favorite writer”) brought up Pasecniks’ mechanics, calling his shot a bit slow. While Pasecniks may be a work in progress from downtown, he does have a nice touch from midrange.

I’m a big proponent of being able to make free throws. Unfortunately, Pasecniks sorely lags in that area, shooting a lackluster 56% from the charity stripe this past season. His field goal percentage is better than his free throw percentage! That’s definitely an area where he needs to work on. He may need to overhaul his mechanics as a shooter, but hey, he’ll be a rookie.

While Anzejs Pasecniks’ raw numbers were not jaw-dropping (7.2 points in 15.8 minutes per game), his potential could be seen on the offensive end. His super efficient 65.8% field goal percentage reflects his comfort around the rim and developing touch. Pasecniks’ speed, fluidity, and touch could be a boon when translating to the NBA.

Length and athleticism are key in today’s NBA’s motion heavy, (soaring, tumbling) freewheeling system of basketball. Anzejs Pasecniks provides the skills in spades. He posted a solid defensive rating of 106.8 this past season, simply bigger than much of the competition seen in the Spanish league and Eurocup. Paseniks’ mobility would be welcome in NBA competition. Trevor Magnotti AKA Young Kurt Rambis AKA @IllegalScreens said that the 21-year old “moves fluidly and contains penetration acceptably for a guy his size.”

He possesses an average wingspan, but his sheer size should be enough to contest shots at the rim. But one issue that may follow him to the NBA is his strength. Pasecniks weighs in at 229 pounds, per Kevin O’Connor and The Ringer. As a comparison, Andre Drummond weighs in at 279 pounds and Pasenciks’ countryman Kristaps Porzingis weighs in at 240 – as a power forward. So Pasecniks may not be able to compete defensively against the girthiest NBA five-men.

Pasecniks played all of his minutes at center for Gran Canaria, but he may be the rare case of a big player moving down a position. With the Nets, Pasecniks’ length would be welcome for the Nets, either at the power forward or center positions. The Nets’ power forward was a glut of undersized power forwards, with Quincy Acy, Trevor Booker and Rondae Hollis-Jefferson splitting time at the 4 spot – often outsized by opponents.

In their NBA Draft mega-preview, the Ringer brought up some issues with Pasecniks’ defensive game. While he does possess solid length and mobility, he isn’t a great leaper or an explosive athlete. His game is more finesse than power – that’s fine on the offensive end but trouble on defense. Pasecniks also may be lacking in awareness on the defensive end. The intricacies of switching, recovering and reading ball screens may be one issue he would need to work on to truly be effective on the defensive end. That could be one reason for Pasecniks to arrive in the NBA sooner rather than later. Euroleague defenses are generally more conservative, with two-big man sets and teams often playing zone defense.

Pasecniks is a decent rebounder, averaging 7.9 rebounds per 40 minutes for Gran Canaria. But his rebounding rate was 12.3%. As a comparison, the most solid rebounders in Liga ACB had rebounding rates over 15%. Especially with his lack of size, Pasecniks will need to work on his rebounding technique, as well his strength to rip down boards.

Pasecniks will be turning 22 at the end of the year, automatically eligible for the draft this year. European hoops reporter David Pick and Jonathan Givony of DraftExpress called “a late bloomer.” While Pasecniks is essentially the age of a college junior, he still has a ton of room to grow. He only received major minutes this season and is still filling out his lanky frame. But so far, Pasecniks has shown his potential. Check out this 24-point, 7-rebound performance in April against Estudiantes.

The full Pasecniks repertoire was on display in that game. And another interesting nugget. Brooklyn Nets assistant GM Trajan Langdon was reportedly in attendance at that game. So Pasecniks’ performance may have caught the Nets’ eyes. Also in attendance at that game were Spurs head honcho R.C. Buford and new Indiana Pacers President of basketball operations Kevin Pritchard, per David Pick.

Kristaps Porzingis and Anzejs Pasecniks grew up together. They were born the same year and likely have known each other for quite a while. They also possess similar skills as agile big men with soft touches. But Porzingis is not Pasecniks. Trevor Magnotti explained that difference, explaining that Porzingis is way more polished – and a far superior shooter. The comparison is optimistic and would be amazing for a late first round pick, but the two are different.

But if Pasecniks is drafted by the Nets, I’m hoping a nickname for him is bestowed upon him. AP? Anz the beat goes on? AnzPas? ANZ-Dynamite? We’ll see.

The Brooklyn Nets have shown their interest in adding European players either via draft or free agency. Anzejs Pasecniks is a late blooming prospect that has shown tremendous mobility and touch. While he has shown some deficiencies in his outside touch and defensive instincts, Pasecniks, ideally, would be a project that would grow with the Brooklyn Nets. If the Nets take a shot at Pasecniks, Kristaps Porzingis won’t be the only Latvian unicorn (sorry, I just had to use that) roaming the five boroughs.

For more Brook-Lin.com draft coverage, check out these profiles on Jordan Bell, Sindarius Thornwell and Josh Hart. Stay tuned for more scouting reports and news on Jeremy Lin, the Brooklyn Nets and the 2017 NBA Draft!