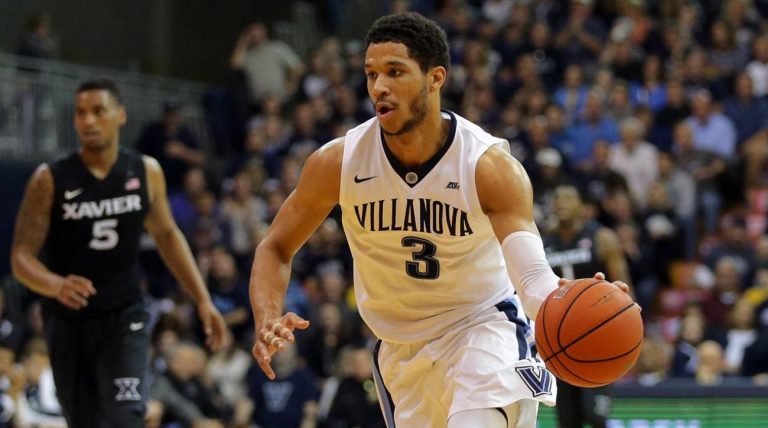 Josh Hart Could Be A Second Round Gem, But Does He Fit In Brooklyn?

For the Brooklyn Nets, this draft is going to be about finding useful pieces in abnormal place. With three picks, 22nd overall, 27th overall, and 57th overall, the Nets will have to try to fill the holes on the roster. Josh Hart is a value prospect that could do just that. According to Adam Zagoria, Hart is on Brooklyn’s radar and was one of several prospects brought in to workout for Brooklyn on Thursday.

Villanova’s Josh Hart and Oregon’s Tyler Dorsey to work out for the Nets on Thursday. https://t.co/xYLCL3o2Xg

The 6’5″ guard/forward out of Villanova has ended his college career as one of the most decorated players in school history. After leading the team to a National Championship last season, he returned for his senior season where he was the best player on one of the best teams in the country. He averaged 18.7 points, 6.4 rebounds, 2.9 assists, and 1.6 steals per game which was good enough to earn him Big East Player of the Year, Big East Defensive Player of the Year, and First Team All-American.

Hart is an efficient scorer, being only one of four players in a power five conference to use 16 possessions per game and scored 1.10 points per possession according to Synergy Sports Tech. He took 5.1 three-pointers per game and hit 40.4 percent of them, upping his percentage from his junior year (35.7 percent). He is a capable passer, but is not a combo guard by any stretch of the imagination. He is best suited playing on the wing given what a gifted rebounder he is, especially on the offensive glass. His high energy, high basketball IQ, and natural nose for the ball always put him in good position for offensive rebounds.

As far as Hart’s game is concerned, it may be well rounded but it is far from refined. While he is an extremely strong finisher in tight, shooting nearly 66 percent near the rim in the halfcouft according to Synergy Sports Tech, he isn’t too elusive with the ball in his hands. He is mostly a straight-line driver and lacks any shiftiness to his game. He is very quick and is by no means un-athletic, but he lacks explosion around the rim that is usually needed to succeed as a wing at the NBA level.

His lack of explosiveness also ties into another concern in his game, his inability to create separation between him and his defender. His lack of creativity and handles also impact his ability to hit jumpers off the dribble. He made only 33.7 percent of jumpers off the dribble last season. This is also partially due to a flaw in the mechanics of his jump shot. The hitch in his followthrough raises concerns on if his efficiency and scoring will truly translate to the NBA level.

He is also incredibly predictable when driving the lane. When met with a defender towards the top of the key, he will *always* spin to his right hand and try to finish through the contact. His 6’8″ wingspan and tendency to try to muscle his way through contact is a recipe for struggling against NBA size and length. If he wants to translate to the next level, he will need to focus on diversifying his handles and fixing the issues with the mechanics of his jumper. Given his age, a lot of his problems are going to be viewed as permanent instead of something that can be molded.

Hart isn’t as long as Roberson or Matthews, but he has the potential to end up somewhere on this spectrum. Roberson is not known for his offensive prowess, but he is the do-it-all type player that helps make the Oklahoma City lineup work. He can rebound, he can defend the wing better than most, he is unselfish with the ball, and on a good day he can hit an open three-pointer but isn’t too reliable due to his weird shooting motion. Matthews, on the other hand, was one of the better 3&D players in the league prior to his Achilles injury back in Portland.

This is probably where Hart will land. He is by no means a facilitator but he is unselfish with the ball in his hands and is good about making the extra pass. What he lacks in length on the defensive end he makes up for with positioning and quickness. There is a good chance that, much like Roberson and Matthews, Hart will never be the focal point of a team but depending on what team he lands on, he can make a big impact in the right role with the right coaching staff around him.

How Hart Fits In Brooklyn

How he fits into the equation in Brooklyn is all dependent on how his offensive game translates to the next level. If his three-point shot isn’t bothered by length and he can finish in the paint anywhere near the level he did as a senior, he could potentially replace someone who was viewed as a defensive liability like Sean Kilpatrick. If his shot is slow to come and his offensive game is easily disrupted, he could still be useful off the bench as a utility player that would grab rebounds, move the ball, defend well, and occasionally hit a three.

If there is any coach in the league that could help his jumper and try to improve his handles, its three-point shooting, point guard whispering Kenny Atkinson.

As an assistant in Atlanta he was able to improve the range of those like Al Horford and while with New York he was famously one of the minds and influences behind Jeremy Lin‘s incredible run that elevated him to international stardom. While in Brooklyn, Atkinson has turned Brook Lopez into a legitimate three point shooter and made a gang of D-Leaguers look competitive. In addition to what Atkinson brings to the table as a coach, Hart is without a doubt coachable as a shooter as he improved from 35.7 percent to over 40 percent year to year.

Brooklyn’s awkward positioning late in the second round could see Hart off the board before Brooklyn can select him. He would be a gigantic reach with the 27th overall pick, but if the Nets could move up to get him or he somehow slides all the way to 57th they will be getting one of the hardest working, highest IQ players in the draft. If Atkinson can sink his hooks into the former Villanova star, chances are good things will happen for him.