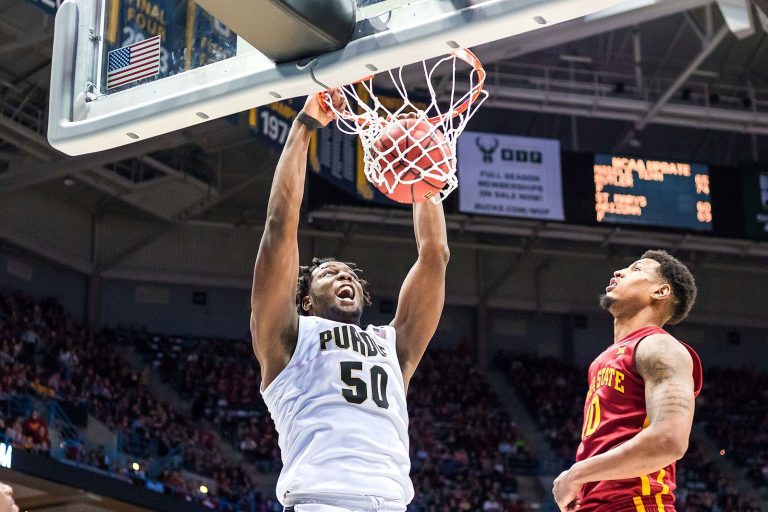 Caleb Swanigan Could Be A Diamond In The Rough For Brooklyn

Caleb Swanigan will be an offensive force from the moment he enters the NBA. However, he will need to develop significantly on the defensive end to earn playing time at the next level. While he is too slow to play power forward and a little short for a center, his massive wingspan and excellent rebounding will help him to overcome those deficits. He may never be more than a bench player, but he could be a valuable combo 4/5 for Brooklyn as early as next year given his penchant for crashing the glass and his ability to score effectively from anywhere on the floor.

The Underdog Story of Caleb Swanigan

No matter when Caleb Swanigan’s name is called on June 22th, he will be a huge success story. Swanigan battled homelessness and weight issues as a child before losing over 100 pounds in high school. He blossomed from an overweight teenager into Indiana’s Mr. Basketball in 2015. Swanigan finished high school in three years and committed to Purdue after a short stint as a Michigan State Spartan recruit.

Swanigan spent most of his freshman season playing behind A.J. Hammons. After Hammons departed for the NBA, Swanigan put together a breakout sophomore season. His numbers improved across the board, and he was rewarded with the Big Ten Player of the Year Award. He is also a potential target for the Brooklyn Nets with one of their late first-round picks:

#Purdue‘s Caleb Swanigan said he is working out with @BrooklynNets on Thursday and @OrlandoMagic on May 22, two days before deadline.

While Swanigan would probably not start for the Nets with Brook Lopez entrenched in the middle, he would be a huge upgrade over Justin Hamilton as an offense-first center. Caleb Swanigan may never start in the NBA, but his incredible growth from his freshman year of high school to today makes it hard to bet against him.

Caleb Swanigan’s calling card in the NBA will be his offensive mastery. He was a solid offensive piece as a freshman but made huge strides during his sophomore year. Swanigan nearly doubled his points per game average, from 10.2 to 18.5 in his second year. He coupled that with a huge jump in efficiency; his True Shooting Percentage climbed from 53.3 percent to 62.0 percent.

Most of that improved efficiency stemmed from his accuracy from beyond the arc. Swanigan shot just 29.2 percent from deep as a freshman. However, he canned 44.7 percent of those looks as a sophomore, an elite mark for any player but especially for a big man.

That being said, the sample size is too small to declare Swanigan a three-point threat. He will make more shots from deep than Enes Kanter, but he still only shot 157 times from deep in his college career. Even elite NBA shooters can have hot or cold seasons with that kind of sample size–just ask Danny Green. Justise Winslow shot 41.8 percent from deep in college on 110 attempts and has failed to shoot anywhere near that well in the NBA so far. While Swanigan’s solid free throw percentage (78.1 percent) indicates that his jump shot will translate, that certainly is not a guarantee.

Whether or not his shooting translates, Swanigan improved his future value by also making strides as a passer this season. He averaged 3.0 assists per game as a sophomore after averaging 1.8 per game as a freshman. He also lowered his turnover percentage from a troubling 21.6 percent to a far more manageable 18.5 percent (stats courtesy of Sports-Reference). His all-around offensive game will make him a tantalizing prospect for a team like the Nets that is in need of frontcourt help off the bench.

Caleb Swanigan will struggle on the defensive end as a young player in the NBA. His lack of lateral mobility will limit him in pick and roll coverage. However, there are some positive signs from his college career that show that he is not doomed to being a negative on that end of the floor.

Any discussion of Swanigan’s defensive potential has to start with his gargantuan wingspan. Swanigan’s wingspan of 7’3″ (as measured at the NBA Draft Combine) will help him to make up for his relative lack of height. He may be too slow to defend stretch-4’s, but he could morph into a competent defender in the middle as a center.

Swanigan’s low block and steal rates (the numbers that consistently translate to the NBA) show that he will not be able to generate many turnovers. However, all of the other advanced numbers are very high on his defense.

For all the talk about Swanigan’s defensive weaknesses, his team played much better defense with him on the floor. Part of that might be due to his absurd 32.6 percent defensive rebounding rate, which limited opponents’ possessions. Nonetheless, the story of Caleb Swanigan’s defense is not entirely negative. His weaknesses on that end will be easier to exploit in the NBA, but his massive wingspan and advanced defensive numbers indicate that there is more to the story than meets the eye.

Swanigan’s NBA future will be determined almost as much by his shooting touch as it will by his defense. He is already a top-tier post-up player, and his jump shot could make him even more lethal. Defenders will not be able to switch a wing onto Swanigan to cover him from beyond the arc, as he can bully those players with his back to the basket. His improved passing touch will allow him to create for others if teams swarm him down low.

Swanigan will be a useful player on offense whether or not his shooting from beyond the arc carries over to the next level. However, his accuracy from deep will determine whether he will be another Enes Kanter or a poor man’s Kevin Love. On the other side of the floor, his ability to cover ground while guarding the pick and roll will determine just how long any team can afford to keep him on the floor.

Caleb Swanigan might not have a place in that starting unit, but his offensive versatility and energy on the glass could revive a moribund Nets bench. Swanigan might not be the flashiest prospect, but he has been steadily improving for many years now. The Nets, as well as any other NBA team, would be wise to not count him out just yet.