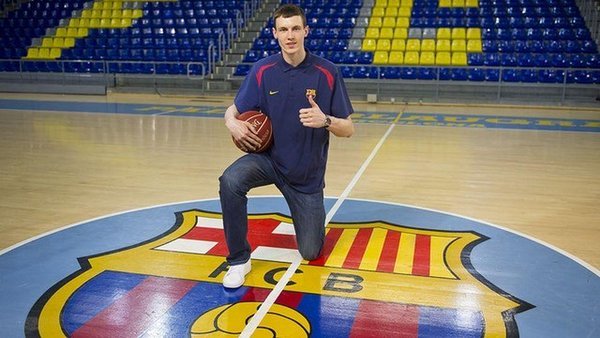 If you asked the average NBA fan or writer who Rodions Kurucs was, chances are you’d be met with a confused look. I am no different, as this article was birthed out of doing research to reply to a comment on a Reddit post (hope this suffices, BKtoDuval). Its no secret that the Brooklyn Nets have expended an incredible amount of effort scouting Europe this season, trying to find a diamond in the rough before another franchise can scoop it up.

After doing their homework on the 6-foot-9 three-point shooting, dunk-it-in-your-face small forward out of Latvia, Sean Marks and company are reportedly “sold” on drafting Rodions Kurucs. With two picks in the first round, Brooklyn has a great shot at landing him, but according to Basketball Insiders, Kurucs is quickly gaining steam with teams around the league and could be off the board as early as No. 15 to Portland.

Towards the end of this season, Trevor Magnotti of The Step Back wrote about how important it is to apply context to Rodions Kurucs’ situation. Unlike most of his peers, who took sparse playing time with their senior teams over real playing time with one of the junior teams, Kurucs played 24 games for FC Barcelona 2 and only one game for the senior team. This was partially due to the fact that the 19-year-old was coming off a meniscus injury, but what it did was allow himself the opportunity to grow and showcase the player he could be.

Playing for the junior team instead of the senior team allowed him to experiment and play a little out of position, as well as do things that weren’t normally asked of him or expected of someone his size. He is a long, athletic wing that has incredible upside as both a shooter and slasher. His numbers are impressive — when adjusted per 40, he’s averaging 17.9 points, 5.3 rebounds, 2.7 assists, 1.4 steals, 1.4 blocks, and 3.3 turnovers per game while shooting 31.9 percent from deep and 55.7 percent on everything from inside the arc.

People will point to his inability to hit in-game three-pointers with consistency as a knock against him, especially when compared to popular domestic prospects. Austin Green of Los Crossovers debunked that argument after taking a deeper look at some of these prospects:

With some more practice, Kurucs should develop into a good NBA 3-point shooter.

Curiously, according to Synergy, he is 11-of-22 in guarded catch-and-shoot situations and 2-of-16 in unguarded situations. I’m thinking this stat is somewhat skewed by end-of-quarter heaves, but I’m not positive.”

It is a safe bet that Rodions Kurucs will develop a consistent three-point shot at the NBA level, especially after watching the footage that came out of his pro-day on Saturday.

6-9 Latvian forward and Barcelona product Rodions Kurucs shooting it well from beyond the arc at Catalyst Sports Pro Day. pic.twitter.com/j7J2XZs2k0

You can see for yourself just how pretty his shot looks. Aside from some minor inconsistencies, he has a pretty good shot that works for him. He went 8-for-11 from deep in these drills and looked very comfortable during the process. If nothing else, he is going to be very effective off the catch-and-shoot at the next level.

Outside of what he brings as a shooter, he is incredibly exciting to watch attack from the perimeter. He is good at using his height to create space and plays above the rim once he gets there. Kurucs also shows the beginnings of being able to handle the ball in the open court and create for himself in the half-court.

If Kurucs can pull all of this together, he could end up being an incredibly gifted and dangerous prospect. His versatility on offense will be his calling card, being able to hurt you from deep and slashing to the hoop. Chances are he is at least two years away from his NBA debut, but he will most likely have a nice role on FC Barcelona’s senior team come next season.

Rodions Kurucs has a chance to make a gigantic impact at the next level one day, but a lot of his future success depends on how his weaknesses will translate to the NBA. It is tough to gauge a 19-year-old that has yet to scratch the surface of their true potential, but if Kurucs doesn’t address some of these things, he will suffer long-term.

A lot of what he does offensively might not translate to the NBA. He is someone that struggles against size in the paint, possibly due to his 190-pound frame. Most players use strength to finish through contact or finesse to finish around it — Kurucs lacks both right now. His handles aren’t polished enough yet to consistently create for himself, often leading to turnovers. Teams will want him to be a secondary ball-handler, given basketball’s position-less trend, but there is no way he could consistently bring the ball up in transition or the half-court right now.

The biggest concerns in his overall game might be his lack of defensive fundamentals. He may be versatile on offense, but he is a liability on defense. As a small forward, he isn’t quick enough to stay in front of wings, and if he ever moved to power forward, he would be overpowered with ease in the paint. He has a lot of length, which will help his case when defending against entry passes and being disruptive in general. But, he needs to work on his footwork and keep who he is guarding in front of him.

Almost all of his issues can be solved with more playing time against better competition and growing into his body. The only catch is you might not like the answers. If he still can’t finish against size, fails to develop handles, and doesn’t do anything to improve his defense, he will severely limit his impact at the next level. At worst, he is a 6-foot-9 spot up three point shooter that doesn’t defend.

How He Fits Into Brooklyn

How he fits into Brooklyn depends on how he develops with Barcelona’s senior team over the next couple of seasons. If he can start finishing better against size and develop some polished perimeter skills (better handles, passing without committing silly turnovers, more consistent three-point shot), then he could be incredibly valuable for the Nets.

His slashing and athleticism would be perfect coming off a dribble handoff or a Brook Lopez screen. He could also be a great secondary ball-handler and an upgrade in an offense that saw the likes of Rondae Hollis-Jefferson initiating things in the half-court at times. His three-point shooting would be a hand-in-glove fit with Kenny Atkinson’s motion offense that is starved for true shooters.

If he never develops these skills and remains as the same type of player he is right now, he can fall back on his shooting and length. Luckily for him, 6-foot-9 shooters are hard to come by. He would probably look like a less polished, more athletic, less reliable version of Mike Dunleavy Jr if he never realized his NBA potential.

It’s pretty easy to see why the Brooklyn Nets are sold on someone like Rodions Kurucs. Kenny Atkinson likes to have players that can create mismatches. Kurucs could grow into one of the most interesting mismatches to come out of this draft class. He is one consistent dribble crossover away from opening up an entirely new aspect of his game. If he can start tapping into his full potential while also building on all the success he has had, Kurucs should enjoy a good career in the NBA and hopefully a long one with the Brooklyn Nets.