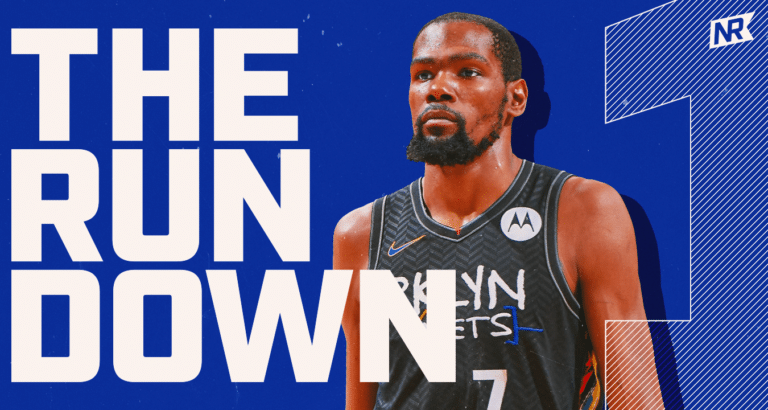 The Rundown: A Retrospective Look at the Brooklyn Nets’ Opening Week

Welcome to The Rundown, a weekly Brooklyn Nets film column covering interesting trends from the past week.

I will be focusing mostly on details that I believe have gone under-the-radar and highlighting noteworthy Brooklyn Nets tidbits from the past seven days — both positive and negative.

Here’s something we’re all aware of: Kevin Durant and Kyrie Irving are been lighting the NBA world on fire to open the season. What’s gone under-the-radar, if you will, is the impact they have on their teammates. Players like Joe Harris and DeAndre Jordan have been capitalizing off of open looks for years. Whether at the rim or from behind the arc —but have never had the luxury of sharing the court with offensive behemoths such as  Durant or Kyrie.

Be it in the half-court or transition, fast-break or drawn up play, Durant and Irving’s offensive “gravity” is undeniable. It impacts every movement made of any competent defense, no matter how slight. It’s up to the Brooklyn Nets’ role players to take advantage of these adjustments forced on the opposition, and so far, they have. Let’s dive into a few examples:

After a great defensive play by Caris LeVert, the Nets are off and running on the fast break. Bad news for the Warriors defense: Irving and Durant are ahead of the pack. Irving is pushing the ball with poise, and Durant is already at the opposite three-point line. Golden State’s wing instinctively goes to Durant, leaving a streaking Jeff Green barreling down the lane, leading to an emphatic throw down after an effortless no-look dime from Irving.

I get it, Andrew Wiggins, I really do. Kevin Durant is really good at basketball. But please, please, do not lose track of your man. Harris is able to sneak past Steph Curry and Wiggins after a well-timed cut around Spencer Dinwiddie, and the fear of Durant doing literally anything is too menacing for the defense to keep track of Harris. KD may not be universally recognized for his playmaking acumen, but it’s an underrated facet of his game which ultimately led to a pretty reverse finish for Harris.

Let’s stick with everyone’s favorite shooter, Joe Harris. Who is — once again — a recipient of Durant’s superhuman abilities with the ball in his hand. This play comes smack-dab in the middle of a KD hot streak. On the fast break, Jayson Tatum picks his poison by sticking with Durant and not stunting at the Harris drive, where he eventually draws a foul on Grant Williams. From there, he knocks down two shots from the charity stripe.

It seems that Durant has been getting everyone involved this week! After receiving a flare screen from Jordan, James Wiseman is put in an impossible pick-your-poison position: defend DJ rolling to the rim or Durant spotting up. Ultimately, he chooses neither. And Durant punishes the young rookie with a masterful lob up to Jordan who delivers a thunderous finish.

Spencer Dinwiddie is still adjusting to playing with the Starters

In the past few seasons, Dinwiddie has run a very efficient bench offense for the Brooklyn Nets. The Nets have had top-tier bench offenses since his ascension amongst the NBA’s best sixth men. And his stellar play shined in the starting lineup last year with Irving missing time due to injuries.

This year’s campaign, however, is different. New head coach Steve Nash has instead placed LeVert off the bench in a “Manu role”. Dinwiddie has been forced to learn how to mesh with the starters. I detailed how he can adapt earlier in the season, but there have been some unfortunate growing pains to start the season.

The problem isn’t too complicated: Dinwiddie likes to have the ball in his hands. Last season, not only did he average the sixth-most seconds per touch and the ninth most dribbles per touch in the entire league, according to NBA Stats, his usage was in the 97th percentile according to Cleaning The Glass. For a player who has never sniffed an All-Star team, those are some lofty numbers. Now, he’s playing with players who have done a whole lot more than just make All-Star teams, and he’s simply not controlling the ball enough.

Here, Dinwiddie finds himself in a position he is usually comfortable in — a mismatch at the perimeter against a big. He can size up the player, make his move, and then speed by him. Unfortunately for him, he’s not the dominant ball-handler in this lineup and only has nine seconds on the shot clock to work with because of it. He sizes up Biyombo and is now down to six seconds, forcing a bad stepback three.

Last year, 43 percent of his field-goal attempts came after six or more dribbles and 79% came after 2 or more, according to NBA Stats. Here he dribbles four times, but only two of them are real size-up moves. He simply needs more time to settle into his offense.

Here’s another out-of-sorts offensive set. Dinwiddie receives the ball in the flow of the offense with 14 seconds on the shot clock. Even though he is already several feet behind the three-point arc, he habitually brings the ball back out to settle into a drive. That extra set-up takes time. Time he simply doesn’t have. All-Defensive guard Marcus Smart blows up his drive, forcing Dinwiddie to put Irving in a similar situation he had just found himself in a few days later in the above clip.

My Play Of The Week

Steve Nash has emphasized defense since Day 1 of training camp, and it finally seems to be paying off for this Brooklyn Nets squad. Only a trio of games have been played so these stats are all but null, but Brooklyn still does rank first in defensive rating and first in opponent effective field goal percentage.

Steve Nash: "Our offense is probably behind out defense right now."

Naturally, I felt it would be only right to highlight a defensive in this section, which I’m calling “My Play of The Week”.

Right out of the gates against Boston, the Nets show an intriguing defensive formation. For the majority of the game, Durant was matched up against Tatum on the wing. But here he starts on Marcus Smart. When Smart and Tatum execute a dribble handoff, the Nets communicate. They keep Durant on Tatum with Harris mirroring Daniel Theis — the Celtics roll man.

Whether intentional or not by the defense, I like how Irving stays at the top of the key to stay on Smart. Despite his size, Irving is a fantastic defender when he’s engaged. This is why it makes sense to keep him on-ball as much as possible. Another great on-ball defender? Kevin Durant. His partner in crime. Durant and Jordan smartly play ice defense against the pick-and-roll, forcing Tatum towards the baseline. KD is able to use his 7-foot-5 wingspan to contest the shot into a miss, and the Nets recover the rebound. I love this play because it highlights the best parts of what this Nets defense is going to have to be: Irving active on the ball, Jordan’s competency in pick-and-roll coverage, and Durant’s length being a point-of-attack defender.

Joe Harris is holding his own defensively

Staying topical on the defensive end, I have been delightfully surprised by Harris’ defense. Categorized as a “shooter” and not being exactly physically gifted has always led to Harris being slightly underrated on that end of the floor. However, the Virginia product has held his own against larger players during the first week of play. This is going to be crucial if the Nets want to keep defending at a high level. Especially considering the lack of defensive stalwarts on the roster.

Gordon Hayward torched the Nets all night long on Sunday. But I thought this play was a good example of Harris’ defensive effort. He sticks with Hayward well, forcing the ball to be kicked back out to Rozier and the possession to be reset.

Joe Harris does a fantastic job keeping Jeff Teague in front of him; KD does the rest. pic.twitter.com/eNkGnm9NTi

Once again, Joe Harris is able to stick in front of his man. This time it’s Jeff Teague. To go step-for-step with him combined with great poise to have his arms up without fouling is quite impressive. Moreover, he helps create a turnover. Notice how he angles his body towards the strong side where help defenders Durant and Irving are. Durant’s the one who comes up with the steal in the end, but Harris’ fundamentals should not be overlooked.

Thank you for reading the first installment of The Rundown! I’m looking to writing these on a weekly basis, breaking down the smaller nuances of the Brooklyn Nets for you all as the season progresses and this group continues their quest for an NBA championship.