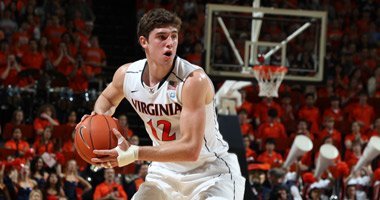 Getting drafted by a contender for the title is a double-edged sword. On the one hand, you get a unique opportunity to work on building a winning mentality. On the other hand, teams chasing the ring usually just don’t have the time to develop their young talent. The Cleveland Cavaliers certainly didn’t. On their road to the 2015 and 2016 finals, they decided to focus on adding proven veterans with a couple of elite NBA skills they could put to use in crunch time. For Joe Harris, a 6’6″ guard who the Cavaliers selected 33th overall in the 2014 draft, this was bad news. It was also the biggest reason he decided to try his luck in a less hostile environment.

During his time at Chelan High School, Harris has had a great relationship with Tony Bennett, the team’s coach. After Bennett left Chelan to accept a head coaching job with the Virginia Cavaliers, Harris didn’t need much persuading to follow suit the following year. He immediately got into the starting lineup and started producing some eye-catching numbers. In his junior season, he was selected to the All-ACC First Team. During his senior year, he led the Virginia Cavaliers to their first Sweet Sixteen appearance in almost two decades. Along the way, he averaged 12 points per game while shooting 40% behind the three-point line.

After getting drafted by the slightly more popular Cleveland Cavaliers, Joe Harris proved his worth in the 2014 Summer League, averaging 7.8 points, 1.5 assists and 1.5 rebounds per game. He played 51 games for the Cavaliers in his rookie season, but no more than 9.7 minutes per game. He was often assigned to the Canton Charge, the franchise’s D-League team. After playing a mere five games in his sophomore season, Harris suffered a season-ending foot injury. Shortly thereafter, the Cavaliers traded him to the Orlando Magic in order to save cap space and avoid the luxury tax. Harris was waived by the Magic immediately after the trade became official. In the 2016 off-season, he signed a two-year deal with the Nets.

Joe Harris’ biggest NBA quality at this point is that he is very close to an elite shooter. He has a very quick shot release, which makes him a great catch-and-shoot option. His 3-point percentages confirm this notion: 40.7% in four years at Virginia, 36.9% in his rookie season with the Cavaliers. He also has a large frame for a shooting guard, allowing him to post up smaller defenders. He can probably play some minutes at the small forward position, which is something the Nets could definitely use. He is a high-character player with a strong work ethic.

As of right now, however, it doesn’t seem like Harris will be anything more than a shooting specialist. His below-average athleticism and poor foot speed limit him on both the offensive and the defensive end. He hasn’t shown he can create his own shots against NBA defenses, and is just an average passer. Despite being a decent defender overall, quicker shooting guards often drive by him too easily. If the team’s defense breaks down, he probably won’t be the guy able to salvage the possession.

On this Brooklyn Nets team, Harris can serve as a knock-down specialist. However, a team with so many guards on the roster might prefer some other options, at least until Harris shows he can improve the other aspects of his game. The good news for Harris is the small forward spot is significantly less crowded. If he can use his bulky body to his advantage, there’s no reason he can’t play some minutes there. And if he starts hitting 40% of his three-pointers, don’t be surprised if he gets a lot more minutes at the shooting guard position.

For the Nets, Harris seems like a smart low-risk, high-reward gamble. Proven young talent is hard to come by in this league, so Sean Marks settled for the next best thing: unproven young talent. The Nets are betting that Harris can improve his game under Kenny Atkinson, which is far from an unreasonable assumption. At this point of their rebuild, this is exactly the kind of move they should be making. As for Harris himself, this is his first real shot at becoming an NBA rotation piece. He was a stud at Virginia, and the potential is there – the question is how he decides to use it.