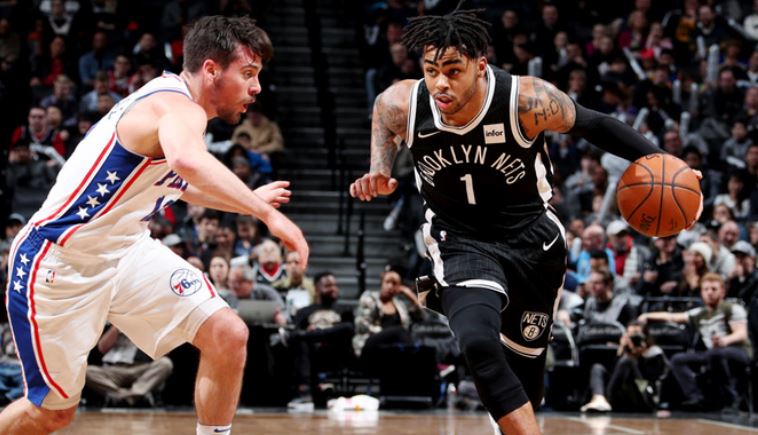 The Brooklyn Nets appeared to have gotten back on the right track after a win over the Charlotte Hornets. The win in Charlotte, an encouraging 125-111 win, came on the heels of two close losses to start the month and a closer than expected loss to the Golden State Warriors. The game appeared to be starting out on the right foot early on, as Spencer Dinwiddie scored the game’s first points on an early layup.

Unfortunately, that layup was not indicative of what would happen during the rest of the game. Philadelphia went on a 10-0 run after Dinwiddie’s opening basket. They continued to control the game on both ends of the floor, leading to a 120-97 Brooklyn loss that was effectively over after that first-quarter run. The Nets might have been able to build on their win over Charlotte, but instead took a sizeable step back. With the season coming to a close, here are some takeaways from this tough loss.

The brief bright spot that Spencer Dinwiddie brought to the Brooklyn Nets early in the first quarter was quickly extinguished by the 76ers. Their 10-0 run immediately after the Nets scored the first two points of the game was just a sign of things to come. Philadelphia outscored the Nets 37-25 in yet another example of the Nets being outscored by double digits in the first quarter of a game. The Nets have lost numerous games this season despite playing three quarters of solid basketball due to a miserable showing in the first period.

The Brooklyn Nets have an overall Net Rating of -4.8 this season, indicating that they are outscored by an average of 4.8 points per 100 possessions. That mark would rank 25th in the NBA. However, their first quarter Net Rating is -12.0, which is nearly 3 points per 100 possessions worse than the 30th-ranked Phoenix Suns’ mark of -9.1. The Suns are the only team in the NBA with a worse first quarter Net Rating than the Brooklyn Nets. The Nets have been getting themselves in big early holes all season long, and this loss was yet another example in a troubling season-long trend.

The Brooklyn Nets as a team had a rough night on the offensive end. They failed to crack the 100-point barrier, and shot just 38.8 percent from the floor in this difficult loss. The Nets also made just 10 of their 28 three-point tries. Given how heavily the team relies on their deep shooting, their mediocre performance from deep would not have been enough even if their defense had managed to hold the 76ers in closer check.

While the team as a whole struggled to score, D’Angelo Russell did not. Russell put up 26 points on only 17 shots in his 28 minutes of playing time, including canning four of his eight shots from deep. Russell also dished out four assists and grabbed four rebounds in this contest. The game overall was certainly not encouraging for the Nets, but D’Lo managed to put up his highest point total since his return from injury. While Russell has been incredibly inconsistent since he returned to the lineup, this game and his 20-point outing against the Warriors are quite encouraging.

D’Angelo Russell’s performance in this game was an encouraging sign of things to come. DeMarre Carroll‘s performance was pretty much the opposite. Carroll has been an important glue guy for the Nets this season, filling in multiple different roles on both ends of the floor to cover for Brooklyn’s plethora of injuries. However, Carroll was an eyesore on both ends of the floor in this game, making just one of his nine shots and getting annihilated by Joel Embiid.

Carroll also fell short on the defensive end, allowing Robert Covington to repeatedly find his way into open space. Covington put up 19 points on just 10 shots in one of his better offensive performances in recent months. While Brooklyn would not have had enough to win this game even if Carroll had played up to his usual standards, DeMarre’s rough night stood out even on a terrible night for the team as a whole.