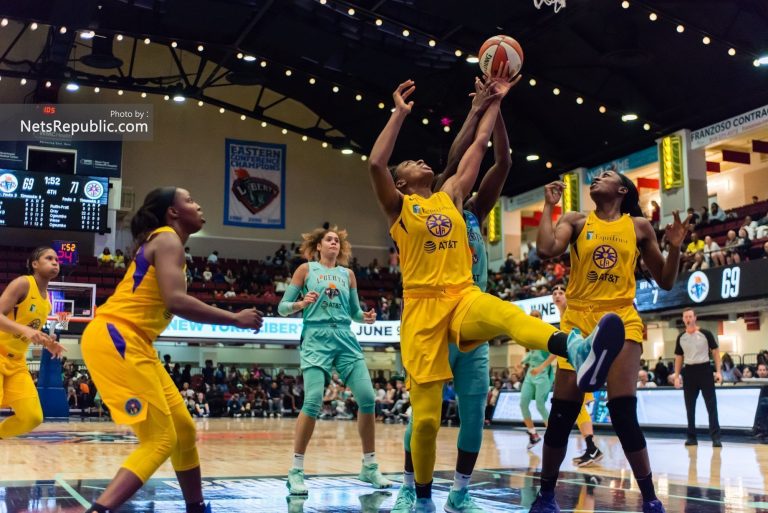 The New York Liberty continue to impress. Not only did they enter the season with relatively low expectations, but their first few games seemed to all but pencil them in to be in position to land currently projected number one pick Sabrina Ionescu.

The season has actually not gone down that road. Since starting 2-5, the Liberty have turned things around in a sense, going .500 over their previous 10 games. Now, New York is on the cusp of the playoff picture, currently just one spot out.

This upstart season continued during the Saturday afternoon showdown against the Los Angeles Sparks. Behind a balanced attack, the Liberty were able to defeat the Sparks’ threatening front court 83-78.

When opponents face the Liberty, most key on Tina Charles and Kia Nurse, forcing other players to beat them. This was especially the case for the Sparks, who not only have a strong front court to hold up against Charles’ dominance, but also the perimeter skill to contain Nurse. While Nurse did score 14 points, both players were limited in terms of the impact they could make. In order to win the game, it was imperative for New York to find contributions from their role players. And did they ever. Not only did they get a masterful game from Marine Johannès (who will be discussed later), but New York also got strong showings from the likes of Reshanda Gray (10 points and eight rebounds), Amanda Zahui B.(seven points), and Nayo Raincock-Ekunwe (eight points). For a team that has not been deep for most of the season, finding contributions from these secondary players might be the key to put the Liberty into the playoff picture.

After playing for France in the women’s EuroBasket, rookie Marine Johannès had to have the beginning of her WNBA career on hold. Since finishing up the tournament and coming over to the US, she has flashed some serious game in just three games with New York. In her short career, Johannès had her best game against the Sparks, scoring 17 points and grabbing five rebounds. She provided some much needed help for the Liberty, who were missing their star rookie Asia Durr. For a team often lacking strong guard play, Johannès could be able to provide a spark.

Does New York push for the playoff spot?

Now at 8-10, the Liberty are now barely on the outside looking in when it comes to the playoffs. In the WNBA, the top eight teams make the playoffs, and New York is in ninth, behind the 8-8 Phoenix Mercury. As I said earlier, this was not expected in the Big Apple at the start of the year. So where do the Liberty go from here?

Obviously, the coaches and players are going to want to make a playoff push. But the team is not perfect. Is it possible that management starts selling high and tries to push New York back to the lottery? Although it is unlikely, it is more common than people think in professional sports, and this situation might be tricky for the Liberty organization.

“Got the win. Happy about that. Thought we were locked in from the start. We had a lot of people contribute. I thought our defense was better than what we did in these last three games, and I think there’s still room for improvement, but I’m really pleased with lots of contributions from people on both ends and just pleased that we got out of here with a win.”

“Tonight I thought they were locked in. Sometimes the ball didn’t go down but we got good looks. I thought our effort and our team tonight was ready to rock and roll.”

“We have a really deep team. I thought Boyd had some really good minutes today, she put a lot of pressure on the [Sparks]. Marine gave us good minutes, Bec, Nayo and Gray came in and they set screens, they dive, they get rebounds, and then you have shooters and guards around who can go make plays. I thought the pace of our play with them was great. I thought they were attacking and had a lot of movement on the offensive end.”

“Her defense has been really solid. I think being able to throw her the basketball and she’s able to make moves and finish against contact. She’s been able to guard a Kalani Brown and Britney Griner, folks that are taller than her, but she’s able to position herself so what she brings is hard work. She does all the dirty work and couldn’t care less, and she’s flying around and people know she’s there, she gives 100% every single time.

“For me it comes with my growth in this league, it’s just thinking about the next possession. After that possession is done and over with, I try to put it as far back in my mind and try to focus on the moment. I believe in the way I shoot free throws over the years, especially at clutch time in the games. I want to have the ball in my hands at clutch times if I know the other team is going to try and foul to get the ball back. For me it all about bearing down and thinking about the next possession.”

“She’s a scorer, she’s got a swagger to her game that’s a little bit different. She brings a European swagger to a North American game that’s a lot of fun to watch. She is confident and I love the way that she plays.”

“We’ve been really focusing on team defense in practice. It’s amping up the energy, getting up into people’s shots to make them uncomfortable, and I think that’s something that happened a lot. We did a great job defensively trying to get deflections and steals. Therefore, allowing that to become a part of our offense and transition game, so that was the big difference for us today.”

Marine on her new team:

“I’m just happy to be here. I try to be a good shooter, work hard and just enjoy it.”

Coach Derek Fisher on piecing together despite missing some of the roster:

“We’re not making any excuses in terms of our roster and the numbers. We still had a chance to win today, at least in terms of giving ourselves a chance to win. We didn’t finish the first quarter very well, and that was pretty much the difference in the game in terms of points. I’m still trying to figure out how to come to grips with Chelsea and Nneka going to the free throw line four total times. As all-stars and all-star starters, and as many times and they were going to the basket, I don’t understand how that happens.”

Coach Derek on the Ogwumike sisters:

“It’s who they are as women is what makes it work. They’re willing to sacrifice for whatever is best for the team, and I think when you approach things from that perspective you play with more fluidity because you’re not trying to force things to make yourself look good, you’re just playing basketball to help the Sparks win. The second reason is that we’re trying is the interchangeable nature of Chiney, Nneka and Candace, they’re all capable of doing tons of things on the court.”

Nneka Ogwumike on the flow of the game:

“It was one of those neck and neck type of games. They fought hard, we tried to fight back as hard as we could. It was just trying to get over that little hump. Whether it was string stops together or hitting shots, it was tough to get into a flow when the game is constantly stopping. That’s hard, for them too.”

“We’ve been in this situation before and we are rolling with who we have. I think what is most important with this is managing ourselves properly off of the court. Recovery is serious business right now. We always come ready to play, so just us being able to regroup and get back into the groove. Everyone has to be ready for game day, that is really what we need to do.”

“We were letting them score at the free throw line. We were putting them on the line and they shot around 39 free throws. If we keep them off the line, it’s a different game.”

Gray on falling short of a comeback:

“Once you see that you’re up, you are fired up. Your mindset doesn’t really change depending on the time and score, but we were definitely looking to take that lead. We kept putting them at the line and they got some buckets. We had good looks down the stretch in the 4th&nbsp;quarter that maybe in another game will convert.”