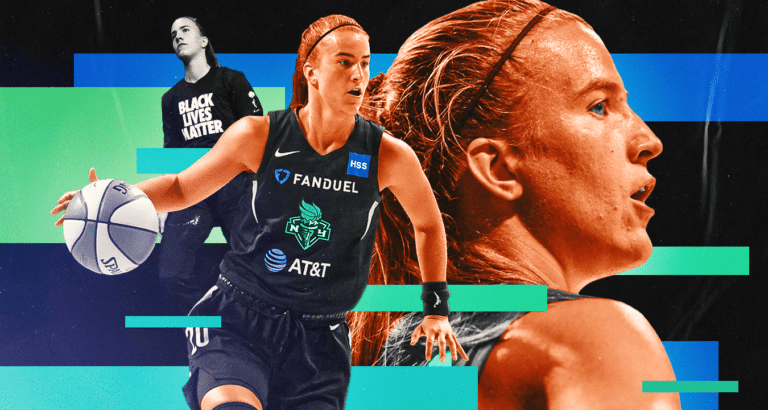 On Saturday, the thing finally happened that New York Liberty fans have been waiting for for almost a year: Sabrina Ionescu made her WNBA debut.

That debut was a bit of a mixed bag from a statistical standpoint, but there was a lot of encouraging signs from Ionescu. She finished with 12 points on 4-for-17 shooting, including an 0-for-8 mark from three, with six rebounds, four assists, and four turnovers. She finished as a -15 when on the floor.

Because Ionescu’s debut was such a huge moment for Liberty fans, I thought it’d be a good idea to do our first Liberty film breakdown piece of the season over Ionescu’s debut game. I’ve gone back through footage of Ionescu and found some moments that help illuminate not only how this game went for her, but what it all says about Ionescu’s future in the league.

(And don’t forget to check out our post-game roundtable with me and our other Liberty writers, Myles Ehrlich and Geoff Magliocchetti!)

Let’s start with Ionescu’s shooting. And no, I won’t make you watch all eight of her missed threes.

So, let’s talk about the first time Sabrina Ionescu shot a basketball in a WNBA game.

Ionescu has the ball out on the left wing with Alysha Clark on her. Clark’s a very good defender, and Ionescu is able to get a little distance from her on the drive. But that driving doesn’t go on for very long, as you can see Ionescu start to gather for the shot basically as soon as her foot touches that three-point line. Seattle’s defenders have formed a triangle down in the paint and it looks like Ionescu is having a “okay, there’s no way I can drive in on them” moment, so she opts to go with a lower-percentage shot, the mid-range floater.

That shot doesn’t fall, but Ionescu didn’t just stop and pop it — she keeps using her momentum to head toward the basket and is able to steal the rebound away from last year’s DPOY, Natasha Howard, and then bank in the putback layup. Great effort by Ionescu on this play to not give up after the less-than-ideal shot she originally put up, and it ultimately results in the first two points of her WNBA career.

How about the first jumper that Ionescu made:

Gets the rebound on the defensive end, then brings the ball up the floor. Kia Nurse helps out off-ball by setting a pick that helps ensure Ionescu is being defended by Epiphanny Prince and not by Jordin Canada, which is pretty huge if you know anything about Canada as a defender.

From there, Ionescu stops at the arc, redirects herself, and drives to the left of Prince. Credit to Prince for sticking to her, but Ionescu has enough space to get right into the middle of the paint, where she has the room to stop and drop in the nine-footer.

At that point, Ionescu was 2-for-3 from the floor. That would obviously not continue. She would miss her next five shot attempts, including three threes. I’m not an expert on shot mechanics, so looking at missed threes probably isn’t super useful for us, but we can look at a missed two and talk about that:

This is one of those plays where you’ve got to recognize the monumental task of scoring against this wall of Storm defenders in the paint and kick the ball out.

Ionescu gets briefly doubled at the top of the arc, then starts driving. But, like, look at this:

There’s just no room for Ionescu to drive here, as the Storm defenders have the basket area walled off. She’s eventually forced to go with the off-balance, left-handed running hook shot with a defender in her face, which is not at all an ideal shot to take.

There are also two open Liberty players behind the arc here, as well as shooters in each corner, though there are Storm defenders positioned to defend those corner shots. It wouldn’t be the easiest pass, but pushing the ball out to Kylee Shook here could have led to a higher-percentage look for the Liberty.

Here’s a play where I don’t have a lot to say. Ionescu dribbles up the floor, goes left, stops and fires the mid-range pullup.

You can see how much more comfortable Ionescu looks when she’s one-on-one with her defender, which…well, duh, of course a rookie is going to look better going against one defender than against multiple defenders!

And finally, here’s the basket you’ve been waiting for:

Howard’s not a guard, but she’s got the quickness to defend guards when she needs to, and Sabrina scoring on her this play is impressive.

Even more impressive is how Ionescu gets to the paint. Uses her dribble move to try creating space to go left, but Howard sticks well, so Ionescu turns around and goes right. Howard still mostly stays on Sabrina’s heels, but there’s just enough of an opening for her to drive to the basket for the layup.

Sabrina had four assists and four turnovers. Let’s talk about a few of them.

Let’s start with the bad: a turnover.

Three of Sabrina’s four turnovers were categorized as “bad pass turnovers.” Experience will help sharpen that up some, but if you’re going to be making some quarterback-esque throws like this one, you’ve got to recognize that the defender has a good chance to jump in front for the interception.

Nice ball movement on this play. Amanda Zahui B has the ball over in the corner, then swings it to Sabrina on the left wing. She dribbles over toward the top of the arc and spots an open Jocelyn Willoughby on the right wing. Breanna Stewart is in a bit of a no-man’s land here in the center of the court, where she could have helped double a Sabrina drive, but she’s too far away to offer more than some last-second lunge over towards Willoughby, who lifts up for the three.

Nice pass from Ionescu in transition here to Kiah Stokes. The main reason I wanted to include this clip wasn’t even about the Ionescu pass; it was so I could shout KIAH STOKES MADE A THREE, because Kiah Stokes making a three is such a weird and cool addition to the Liberty this year.

Ionescu’s other two assists were both to Amanda Zahui B, once on an inbound pass and once when Zahui B was the trailer coming up the floor.

All this is to say that there’s one notable thing that felt like it needed to be explored more on Saturday: pick-and-rolls and pick-and-pops.

Per Synergy, the Liberty had 14 possessions — 14.6% of their total possessions — end via a shot by someone involved in one end of a pick-and-roll. Just three possessions were ended by the roller.

Last year, that number was 18.7%. And Ionescu’s Oregon team was at 22%. We need to see more pick-and-rolls, especially ones that involve Ionescu and Zahui B. It’s still early and there’s a lot to work on, but adding that dimension to this team would make them a lot tougher to defend, and would help put Ionescu in better positions to succeed.