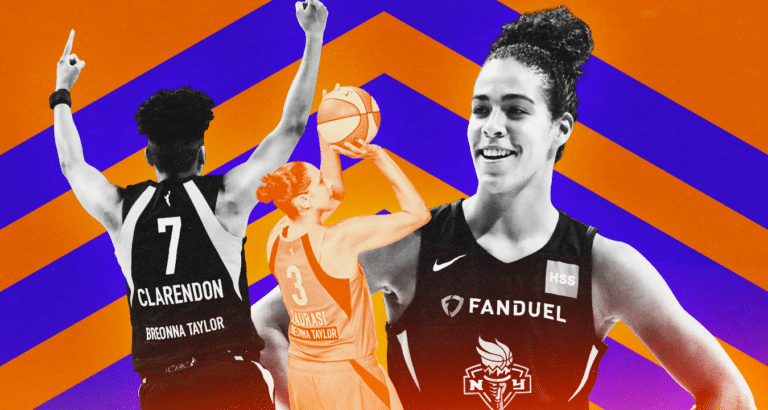 At one point in the third quarter, it looked like the New York Liberty were going to contend for their first win of 2020. Amanda Zahui B cut the Phoenix lead — once double-digits — to two points.

But Phoenix managed to pull back away in the fourth quarter, with former New York Liberty guard Bria Hartley leading the way for Phoenix with a career-high 27 points. By the time it all wrapped up, the Mercury had come away with a 96-67 win. New York’s fourth quarter woes began with Brittney Griner coming back into the game, and things just compounded from there until, by the end of the game, the Mercury had a 30-point win.

Let’s talk about some key takeaways from this game.

The First Half Lineup Shuffling

One thing I noticed in the first half was that the Liberty were going with some pretty wholesale lineup changes. Here’s their substitution pattern from this game, with the shading represent the plus/minus numbers while that player was on the floor:

That first half had some really distinct lineups.

I don’t have any insight from the team into this — I noticed the patterns during the game, but didn’t think to write about them until after the post-game media conference — but this does lead me to some larger questions abut the nature of basketball.

This is a young team that’s got a lot to figure out with Sabrina Ionescu done for (at least) most of the season. Could Walt Hopkins’s substitution patterns early in this one been about building some chemistry between the players and trying to figure out what the post-Ionescu version of the 2020 Liberty will look like while also keeping an eye toward the future by playing so many rookies together at once?

Or was it about how much the team struggled early on? In the first quarter, New York’s starters were a combined 0-for-11 from the field. Maybe the substitution pattern was about trying to fix the struggles that were happening.

Whatever the reason, it did give us a chance to see extended minutes from the all-rookie lineup of Kylee Shook, Joyner Holmes, Leaonna Odom, Megan Walker, and Jazmine Jones. That lineup might not be one that leads to many victories, but it’s a high-energy approach that could, in theory, get up and down the floor and help push New York back into a game with a run-and-gun approach. That didn’t happen Sunday, but I hope Hopkins keeps giving this lineup some run. Let the youngsters figure things out with playing time.

This was not a very good game for New York, but there was a bright spot, as the team got within two in the third quarter after this Amanda Zahui B three:

New York won that quarter 29-21, getting things close enough to make it seem like New York could steal a win.

When Odom checked in for Jocelyn Willoughby, the Liberty trailed by 13. When Odom checked out for Jazmine Jones, Zahui B was at the free throw line, cutting the lead down to four. That lineup played well on both ends, New York finally hit some threes, and we got to see what this team could look like.

The other reason was that Brittney Griner left the game due to foul trouble, missing most of that third quarter. Without Griner’s presence on both ends of the floor, things felt simplified for New York. It was easier to score. It was easier to defend without having to account for Griner in the post. It’s not at all a coincidence that the team played like it did with Griner sitting.

Hopkins wasn’t necessarily thrilled by this second point. When asked about taking advantage of Griner’s foul trouble post-game, Hopkins changed the subject, talking about how they struggled to contain Griner when she was in.

He told the media that “we didn’t execute our coverages on Griner the whole game. We didn’t have a lot of practice time. It was a new coverage for [the Liberty.] So, part of it’s that Griner’s really, really good, but we didn’t do what we were supposed to do against her.”

Hopkins’s quote brings us to the next point:

The game got close, and then it very quickly got not close.

A big part of that was that New York had no answer once Griner came back into the game. Griner was a plus-29 in this one. Even without dominating — she had 16 points and six rebounds, neither of which led the ream — she was just able to shift the gravity around in such a way that New York was thrown off their game on both ends. The Mercury lead quickly ballooned.

I won’t linger on this fourth quarter for long, but New York’s 1-for-11 from deep mark in the quarter underscores a broader concern about this team.

If we were to give out a Player of the Game award, it would have to go to Phoenix Mercury guard — and former New York Liberty guard — Bria Hartley.

Hartley had herself a game on Sunday, continuing a trend this year where Hartley scores a whole bunch of points off the bench for the Phoenix Mercury. Her performance has started to reach “could Bria Hartley win Sixth Woman of the Year” levels already.

There’s a lot we could say about Hartley’s performance on Sunday. If you want a longer breakdown of it, here’s a great Twitter thread from Nekias Duncan:

New York just kept giving Hartley space to shoot. As Nekias points out, defenders just kept going under screens, trying to prevent Hartley from driving, and Hartley responded by just using the extra space provided by that decision to fire up some shots.

New York doesn’t necessarily have a lot of bigger post players, though Kiah Stokes, Amanda Zahui B, and Kylee Shook all have potential to block some shot. But by going under so many screens, you wonder if this defense doesn’t want opponents driving because there isn’t that imposing post figure like a Brittney Griner or Sylvia Fowles to help halt those drives. So, you go under them and live with the shots that Hartley’s going to take, and on this night, those shots just keep dropping into the basket.

Anyway, as someone who enjoyed watching Bria Hartley in New York, it’s been good to see her production this year. It was less good to see it on Sunday, obviously, but Hartley getting a chance to flourish in Phoenix is objectively cool for Liberty fans.