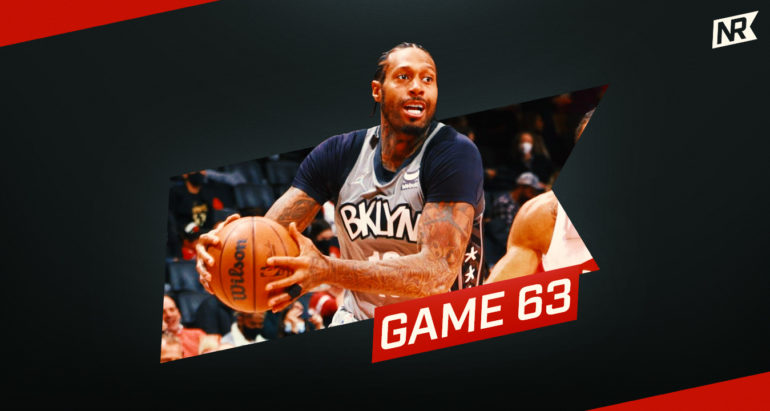 Following their embarrassing defeat 24 hours earlier at Barclays Center, the Brooklyn Nets traveled north of the border to battle the Raptors on their home court. Unfortunately, the Nets were unable to get revenge for the shellacking they received on Monday and dropped their second straight to Toronto.

The game started off much better than the previous night. Brooklyn’s offense had more life as they seemed to handle the Toronto pressure with more ease. Scottie Barnes looked to be off to another big night with eight quick points, however, he cooled off as the half went along. Defensively the Nets did a much better job against the Raptors in the first quarter, surrendering only 32 points after allowing 42 the game before.

The second quarter is really where the Nets woke up and flipped the script. The offense got it in gear to the tune of 34 points spearheaded by some hot shooting from Seth Curry (19 points, six assists) and Bruce Brown’s continuous efforts in the paint. Although the Nets gave up 34 points in the paint their zone, defense gave the Raptors a new look and seemed to do the trick, holding Toronto to just 23 second-quarter points. It also helped that Brooklyn wasn’t allowing open threes every other possession like the last game. James Johnson was a surprising offensive catalyst in the first half leading Brooklyn with 11 points including a pair of triples.

The second half for both teams didn’t start out the smoothest as the teams looked a tad rusty coming out of the locker room. Although the Nets continued to stick to the zone, the Raptors started poking holes in it and began to find a bit of a rhythm offensively, slowly but surely. Brooklyn would also hit a wall on the offensive end missing seven straight field goals. The Nets would answer a 7–0 Raptors run (14–7 extended run) with a 7–0 run of their own behind buckets from Seth and a big Patty Mills three. Nicolas Claxton, who has seen his playtime diminished over the past few weeks, injected some positive energy on both ends of the floor highlighted by a steal resulting in a monster slam. Cam Thomas also made an appearance on the offensive end and played a key role in the 14–4 run the Nets went on to close the quarter.

The fourth quarter wasn’t kind to either team as the shooting woes that plagued both in the start of the half reared their ugly head yet again. The Nets went nearly five minutes without hitting a field goal as the shots just weren’t falling. Despite the shooting woes, the Nets were able to build a six-point lead in the later stages of the quarter, however the Raptors went on a 5–0 run and quickly seized the momentum back. After an extended 10–0 run by Toronto, the Nets were able to tie the game with about 40 seconds left on a Seth Curry three. However, Gary Trent Jr.’s free throws with around 30 seconds left proved to be the game-winner as the Nets fell short.

After being buried on the bench for the past few weeks it was refreshing to see Nic Claxton on the court doing all the things we’ve come to expect from him. His energy was terrific from the time he checked in and he made some immediate impacts.

Defensively is where Clax shined the brightest. He caught a nice block on a three-point attempt at the end of the first quarter and would tally three rejections on the night. His presence around the rim was a welcome sight and he seemed to work well in tandem with LaMarcus Aldridge. Although he only totaled five rebounds, he certainly helped others get some with his activity on the boards with tips.

Claxton’s best sequence of the night came in the third quarter where he did a nice job getting his hands in the passing lanes, got the steal, and took it to coast to coast for a monster dunk.

With a performance the likes of what we saw tonight it’ll be interesting if this finally gets Claxton proverbial doghouse once Steve Nash returns to the sidelines. With the return of Kevin Durant and the debut of Ben Simmons, Claxton could be a feature piece in certain lineups.

It’s safe to say there weren’t many Goran Dragić jerseys in the arena as the former Raptor was showered with boos upon entering the game. If you’re curious as to why he was booed, it’s simple. Dragić was basically MIA from the team for the majority of the season due to “personal reasons.” The indication was that Dragić had no intention of really playing for Toronto. Needless to say, the fans took it personally and let Goran hear it.

Early on it appeared the boos may have gotten to Dragić as he looked rattled shooting, especially at the line where he missed his first two free-throw attempts. But, like the savvy vet that he is, he settled down and locked in. He would go on to hit a few shots in the second quarter and even hit the crowd with the “shhh” gesture.

Dragić would finish with 10 points on 4-for-8 shooting while also finishing with a team-high +15 in plus/minus. This is the type of play the Nets signed Dragic for. Giving solid minutes at the point guard spot in the absence of Kyrie.

It’s All About Effort

Although losses are always frustrating, this loss is even more frustrating because of what happened the night before. The same team with essentially the same rosters and the two games were night and day. Even with the Nets as shorthanded as they are, there is no reason for getting blown out at home the way they did on Monday. Especially when you see them show a gusty and valiant effort on the road against that same team. After the last game, Bruce Brown said that the performance was “unacceptable” and it wouldn’t happen again. Well, even though they lost he stood true to his word.

This is the type of competitiveness that should be expected of this group and nights like this make you feel even more confident about the team when the big guns do finally return fully.