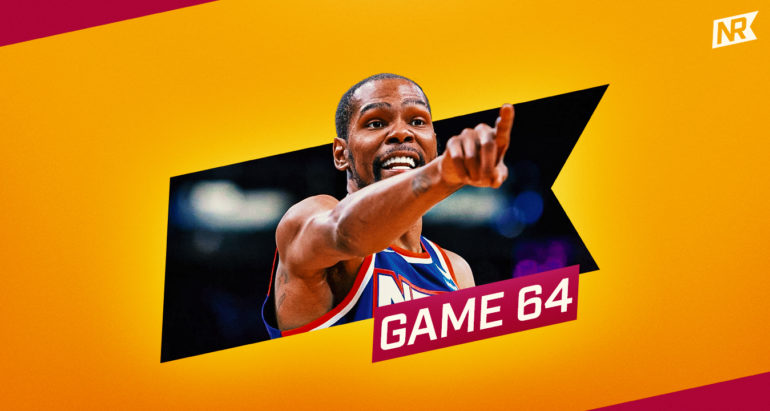 Following a loss to the Toronto Raptor on Tuesday night, the Brooklyn Nets returned to Barclays Center—with Kevin Durant inserted back into the lineup—to take on the Miami Heat, sans Jimmy Butler. But after a hot start in the first half, the Nets would go cold and fall to the Heat 113–107.

Miami had just come off a loss to the Milwaukee Bucks from a Jrue Holiday game-winner. The Nets now sit at a 32–32 record in the Eastern Conference and are just above the 31–33 Charlotte Hornets.

In the first quarter, Goran Dragić started the game with a corner three. Bruce Brown added on four more points attacking the basket early. Durant missed his first two shots until the 8:24 mark, getting a switch on Omer Yurtseven and walking him into a mid-range jump shot. Durant then made a technical free throw picked up by Max Strus. His next bucket came off a Drummond screen and knocked down a turnaround jump shot. Brooklyn quickly took a 15–7 lead off a Seth Curry transition three. But the Heat went into a zone defense midway through the quarter to slow down the Nets offense. They also leaned on Bam Adebayo to lead them as he had seven points in the quarter. Durant led the Nets this quarter with nine points and Patty Mills would take on eight more points, knocking down some three-pointers. The Nets ended the quarter shooting 53.8 percent from the field and 40 percent from three as they took a commanding 35–23 lead.

The Nets held onto a commanding lead in the second quarter but the Heat still battled back. Tyler Herro started by coming off a ball screen, turning the corner and hitting a floater over LaMarcus Aldridge, and then on the next possession isolating Mills and getting to a pull-up jump shot, putting up four early points. Herro ended the quarter with 12 points. Adebayo also applied pressure to the Nets’ big men as he did most of his damage down low, putting up 12 points in the quarter. The Nets started the quarter slow, missing their first three shots but Dragić would get the Nets going at the 9:52 mark attacking off a ball screen, faking Dewayne Dedmon, and scoring inside. The Nets matched the Heat’s scoring with Mills knocking down two three-pointers and Durant continued his dominance midway through the quarter. The Nets went 13–20 shooting 65 percent from the field and 5–8, shooting 62.5 percent from three. The Nets led 67-60.

In the first half, the Nets put up more shots than the Heat and won the three-point battle. The Nets went 9-18, shooting 50 percent from three while the Heat went 4–14, shooting 28.6 percent from three. The momentum to start the second half completely shifted in the Heat’s favor as they battled back to keep the game close.

The Heat closed the lead to just four points off a Caleb Martin three and a Gabe Vincent mid-range shot to start the third quarter. The Nets struggled to find consistent offense as the Heat’s defense started to pressure them. The Nets went 6–21, shooting a poor 28.6 percent from the field, and went 1–8 from three, shooting 12.5 percent. The Heat’s offense picked up, led behind Strus, Adebayo, and Martin who combined for 24 points in the quarter with Strus going 3–5 from three. The Heat tied everything at 74 a piece after Strus hit a corner three followed by a quick ball screen slip that gave Adebayo an open dunk. The Heat then went into a zone defense that confused the Nets and slowed down their offense. Miami took the lead off a Martin cutting layup and continue their 9–0 run. They continued to build a lead off of threes and layups inside. The Nets ended the quarter with Durant hitting a pull-up three and a pull-up mid-range shot to cut into the lead. Cam Thomas knocked down a pull-up mid-range, which cut the lead to four points. The quarter ended 88–84.

The fourth quarter was a roller coaster as the Nets looked to regain the lead. Aldridge started by getting fouled off an offensive rebound and hitting two free throws. The Heat continued their zone pressure and still were able to put up timely baskets. Brown, who had 12 in the quarter, would give the Nets an early offensive boost in the quarter, attacking the basket and hitting some floaters inside. The Nets would go on to miss some shots inside and couldn’t find consistent offense until mid way in the fourth at the 4:02 mark where Brown knocked down two back-to-back catch and shoot three-pointers. Durant helped out and knocked down a fadeaway jump shot in the paint against Martin and on the next possession drawing a foul against Dedmon. Durant hit the two free throws, making this a two-point game. The Nets’ offense went cold after that and Durant would miss his next two shots as the Heat closed the game out 113–107.

With Durant back into the lineup and the Nets on the brink of losing the 8th seed, they quickly need to rack up some wins. The Nets will face the Boston Celtics, who are 8–2 in their last 10 games, Sunday afternoon at TD Garden.