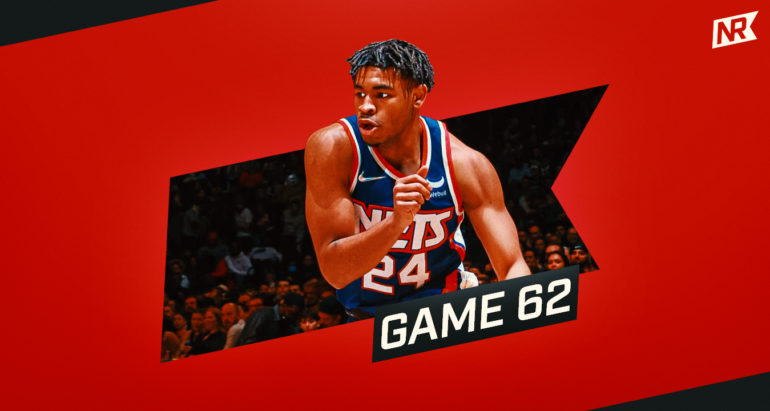 Nets vs. Raptors Recap: Lack of Effort Results in Blowout Loss at Barclays

With seeding implications on the line, the Nets put up a disjointed effort in the first night of a home-and-home with the Toronto Raptors on Monday.

In addition to the expected absences of Kevin Durant and Kyrie Irving, Steve Nash was unable to coach on short notice to due health and safety protocols. Assistant coach Jacque Vaughn is taking the helm for the time being as Brooklyn finds itself with plenty to figure out both on and off the court.

As things got underway, the undermanned Nets saw difficulties on both offense and defense. James Johnson got into foul trouble early, along with multiple other members, putting Toronto in the bonus. Bruce Brown had seven points in three minutes, but the rest of the team struggled. Defensively, Brooklyn looked out of sorts as Toronto got whatever it wanted from both the perimeter and in the paint. The Raptors score an opponent-season-high 42 first-quarter points to get out to a quick 15-point lead.

The second quarter brought an even worse showing from the group. Brooklyn was careless with the basketball, turning it over at a high rate. On top of that, Toronto’s defense was stifling, shutting down Patty Mills and Seth Curry and scoring furiously off Brooklyn’s turnovers. Raptors rookie Scottie Barnes was unstoppable in the first half, scoring 24 points on 10-10 shooting from the field with most of his buckets coming at the rim. There was virtually no resistance from the Nets on the defensive end, resulting in a 71-48 halftime deficit.

The Nets were unable to flip the switch in the second half. No matter who was shooting the ball for Toronto, it seemed like they could not miss. Without Irving or Durant on the floor, Brooklyn failed to create open looks when it needed to. The rookies also struggled, as Kessler Edwards and Cam Thomas were unable to get in a groove throughout the night.

For most of the second half, Toronto held leads upwards of 30 points, and it was clear Brooklyn could not chip away. It was an uphill battle, and it was one that the Nets were not equipped for. The Raptors embarrassed Brooklyn on its home court, coming away with a 133-97 victory to close out the first half of the home-and-home.

At this point in the season, the likelihood that the Nets will be placed in the play-in tournament is growing. There is little sense of urgency from the squad, which was disappointing coming off the strong win against the Bucks on Saturday. Toronto out-hustled, out-manned and out-performed Brooklyn on every possession as it grew its lead to two games over the Nets in the Eastern Conference standings.

The sooner Durant and Ben Simmons can get back on the court, the better. With Irving still unable to participate as a full-time player, others have to fill his role when he is gone. Mills has been in a slump as of late, shooting 29% from distance in February. With a rematch against the Raptors on Tuesday, the Nets have an opportunity to get one back. Brooklyn knows what’s at stake in the standings; Irving’s addition on the road will have to be enough, for now, to get a win on the board.