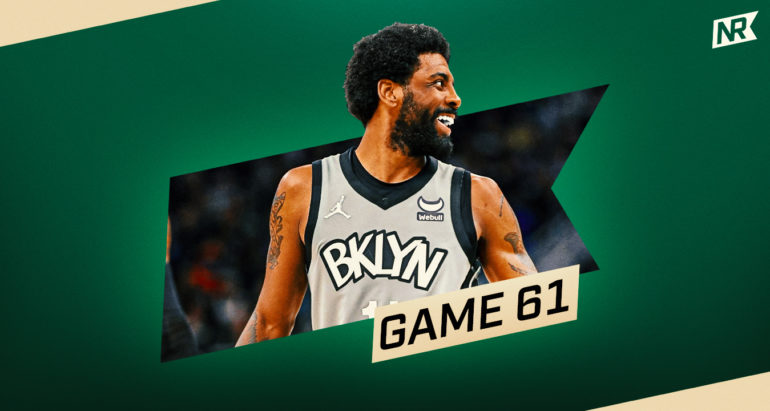 Nets vs. Bucks Recap: With Kyrie Irving, Anything Is Possible

Heading into Saturday’s primetime matchup against the Milwaukee Bucks, the Brooklyn Nets were still reeling from their blockbuster trade with the Philadelphia 76ers. Seth Curry and Andre Drummond had been playing with the team, but Ben Simmons had yet to make an appearance. Kevin Durant was sidelined due to his recovery, and Joe Harris was nowhere to be seen.

That being said, Goran Dragić, who the Nets acquired from the buyout market, was cleared to make his debut for Brooklyn. This proved to be a boost that the team desperately needed—alongside Kyrie Irving’s eligibility to play; and it sparked a magnificent upset on the road.

As the game got underway, Brooklyn struggled to find a rhythm offensively. With Bruce Brown, James Johnson, and Drummond all in the starting lineup, it was difficult to create space for Irving and Curry. The Bucks took a quick 16–8 lead, causing Steve Nash to use a timeout. Thankfully, changes were made, and the Nets found a groove. Irving knocked in a few quick buckets, and Dragić buried his first three point attempt with the team, tying the game at 23.

Despite trailing by seven heading into the second quarter, Brooklyn closed the gap, fueled by Dragić’s electrifying playmaking. His presence was felt immediately, directing and maintaining the offense at a high level. The game went back and forth throughout most of the second period, with the Bucks usually in front by a few points. Bobby Portis Jr. in particular had his way in the first half, scoring 14 points and getting wide open looks from distance. Irving, on the other hand, was sensational, keeping Brooklyn in striking distance with 17 points in the half. Going into the third quarter, Milwaukee led 59–53.

To open up the second half, the Nets grabbed hold of momentum, and surprisingly held onto it. An extended run powered by Irving, Curry, and Drummond put Brooklyn up by double digits, shocking the Bucks and the home crowd. To cap it off, Drummond absolutely posterized Giannis Antetokounmpo, and the Nets led 89–76.

However, defensive breakdowns towards the end of the period allowed Milwaukee to chip away at the deficit. Portis continued to make it rain, and the Bucks were right back in the game. Cam Thomas hit a late three pointer to put the Nets up by six, but Middleton responded, and Brooklyn only led 96–93 going into the final twelve minutes. The Nets did, however, score 43 points in the third quarter alone—the most of any period this season.

The fourth quarter told an entirely different story during the first several minutes. Milwaukee took control, as Antetokounmpo and Middleton continued to attack the Nets’ weak points, scoring and facilitating with minimal resistance. The Bucks took a 112–105 lead, as Brooklyn appeared to have run out of steam completely. That is, until Irving flipped the switch. A flurry of buckets from Kyrie and Drummond gave the Nets a one point lead with three minutes left to play, allowing at an opportunity to pull away.

The final couple of minutes were intense, to say the least. After the Bucks went back up by one, Bruce Brown buried a triple, giving the Nets a lead that defined the rest of the night. Drummond and Johnson contributed with two massive blocks, ultimately sealing the deal for Brooklyn. Down the stretch, both teams played the “foul game,” and the Nets won that battle. Irving, Aldridge, and Curry hit the free throws that were needed, and Brooklyn closed out an impressive road victory in Milwaukee, 126–123.

With Kai, Anything Is Possible

Without a doubt, Irving is one-of-a-kind. Despite both Durant and Simmons being sidelined, he put on a show in Milwaukee, scoring at will on elite defenders. Irving’s unique ability to create his own shot on a whim is incredible to watch, and it’s why his presence is so vital for this Nets organization. Irving not only put up points, but he facilitated Brooklyn’s offense exceptionally well, generating opportunities all night long for teammates.

His resolve on the court to get the job done is why Brooklyn won this important matchup against the Bucks. There were many occasions where it seemed like Milwaukee was going to run away with it, especially when Portis continued to knock down his perimeter looks. Through it all, Kyrie kept the faith, put his head down, and went to work. Time and time again, he exposed Milwaukee’s defense, no matter who – or how many – were thrown at him. He finished the night witha season high 38 points, alongside five rebounds and five assists. When Irving is on the court, there simply is no telling for what he is capable of producing; and Saturday night was a prime example of just that.

This performance against the Bucks was much more than just a win – it was a hard fought, full team effort in an extremely challenging environment. An undermanned Brooklyn squad went into the reigning champs’ home arena, and came away victorious. Drummond, so far, has proved to be an incredibly valuable asset for Brooklyn. His size and ferocious defense was clutch down the stretch, making life miserable for Antetokounmpo for most of the night. He also added five assists to Saturday night’s resume, which is an underrated aspect of his game. If Drummond continues to play at a high level, the Nets will be in excellent shape moving forward.

Hopefully, Durant will be returning within the next week, alongside Simmons in the near future as well. Brooklyn has as bright of a future as anyone in the Eastern Conference, despite all of the issues they have faced this season. If the team can stay healthy as the playoffs approach, we all know what they are capable of in the postseason. After what has been a rough tenure in 2022, this victory could propel Brooklyn onto a major run, something the team desperately needs with only 21 games left to be played.