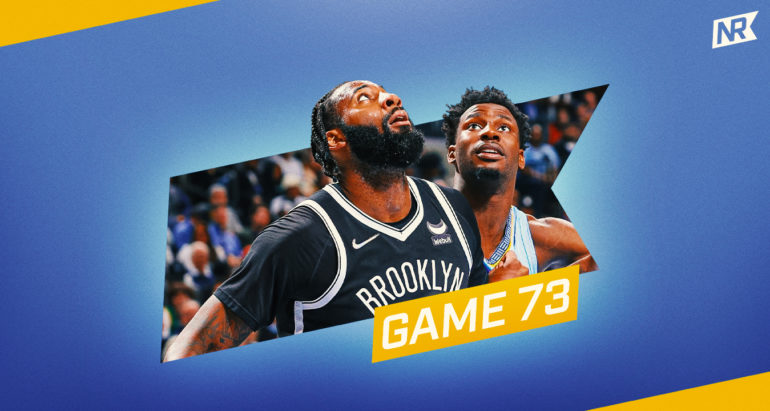 Well, it was a mixed bag of emotions for Brooklyn Nets fans who came into the night feeling ecstatic. The Memphis Grizzlies would be without superstar Ja Morant and just minutes before tip-off it was reported that Kyrie Irving could potentially play in home games again.

The Grizzlies started out the game cooking from three, which would be the prevailing theme throughout the game. Despite a hot start from birthday boy Kyrie Irving, Grizzlies guard DeAnthony Melton had plans to spoil Irving’s big day as he also started the game on fire. Memphis opened the game shooting 6-for-10 from distance with Melton cashing in three of them.

The second quarter saw more of the same hot shooting from the shorthanded Grizzlies as Brooklyn just could not contain their outside shooting. James Johnson, the proverbial black sheep of the team had a pretty rough stretch which helped Memphis balloon their lead to as many as 18. Irving and Kevin Durant did their best to keep the Nets afloat, but the Grizzlies’ hot shooting coupled with a myriad of second-chance points prevented Brooklyn from gaining any type of momentum.

When you have KD and Kyrie on your team, you’re never really out of it. So it was no surprise that the Nets were able to overcome a 14-point halftime deficit and took the lead in the third quarter. Kyrie was in his bag; KD became unguardable, and Bruce Brown started putting his imprint on the game. Brooklyn also got some nice minutes from Kessler Edwards.

Taking a single-point lead into the fourth quarter it seemed as though the Nets were about ready to pull away. However, that would not be the case as once again Memphis came out firing from deep, led by Desmond Bane who would hit three straight triples. In no time the young Memphis team turned a 1-point deficit into a 14-point lead. Durant and Irving did all they could to spur on another comeback but it was too little too late as the Nets would fall 132–120.

Here are some takeaways from a disappointing loss:

Despite the loss, Kevin Durant and Kyrie Irving showcased yet again why they are the most dangerous duo in the entire NBA. They combined for 78 points, 13 rebounds, and 16 assists. Irving led all scorers with 43 points and Durant was right behind him pouring in 35. If not for the uncharacteristically great shooting from the Grizzlies the story of the night would have definitely been these two.

From start to finish the duo was locked in on the offensive side of the ball. It almost seemed like they took turns deciding which quarter they’d leave their mark on with their scoring. Highlight play after highlight play abounded from the two. If it wasn’t Irving putting on a dribbling display leading to a tough bucket then it was Durant hitting a practically unguardable shot. If not for them who knows if the Nets would have been able to keep pace in this one.

Obviously, the load was a little heavier with both Seth Curry and Goran Dragić out but the duo did their best. Unfortunately, it was not enough to overcome Memphis’ big night.

They say never kick someone when they’re down but sometimes a kicking needs to happen. James Johnson has not been a favorite this season among Nets fans and this game was one of the litanies of examples as to why. In 11 minutes of action, James Johnson scored 0 points, made one turnover, collected three fouls, and was a -16 plus/minus. Now obviously plus/minus numbers can sometimes be misleading but watching Johnson out there Wednesday night you would have thought his number would be worse. It’s no coincidence that Memphis went on their big runs when James entered the game in the second quarter as well as the fourth.

It is rather perplexing how and why Blake Griffin did not see any action in this game in place of Johnson, considering how well he performed against the Jazz on Monday. If the Nets want any shot of getting out of play-in territory or making a deep playoff run, Steve Nash has to reevaluate how much playing time Johnson gets. The negatives outweigh the positives, and it has been this way seemingly all season. For every one good game, James has there are about seven or eight stinkers.

As alluded to at the beginning of this recap the biggest story on the night is that Kyrie Irving will reportedly be able to play at Barclays Center as soon as Sunday. Shams Charania of The Athletic reported that an exemption will be put in place thus clearing the way for Nets fans to watch Kyrie Irving at home again.

Obviously, Irving’s part-time status has been the biggest talking point this NBA season but his now potential full-time status will prove to be a huge boost for the Nets down the stretch of the season. With nine games left on the season, the Nets are still within striking distance of possibly catching the Cleveland Cavaliers for the 6th seed. It also gives them a boost to get the 7th seed which, although they would still be in the play-in, ensures Irving could play assuming the Toronto Raptors are the opponent.