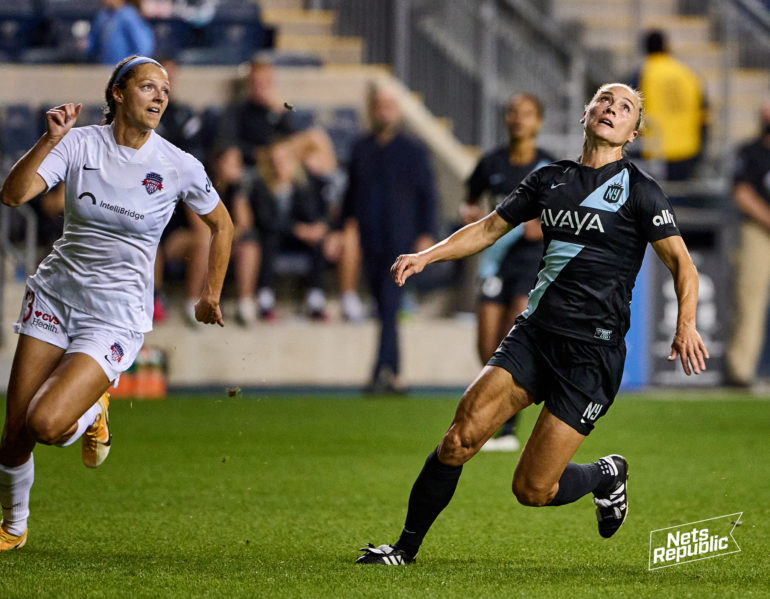 NY/NJ Gotham FC took a point on the road Friday night against the Washington Spirit, ending the club’s second match of this year’s Challenge Cup in a 1-1 draw.

Though the team was unable to capitalize on being up a player for the last 25 minutes of the match following a Spirit red card, Gotham will view their performance as progress. The club opened their Challenge Cup campaign with a loss last week in North Carolina, and players are continuing to adjust to the way Head Coach Scott Parkinson wants them to play.

“Better than last week. [It was] a slight step forward, [we had] a little bit more quality on the ball, a little bit more intensity,” Parkinson said of his team’s performance following the match. “Still not quite there with the aggression that we look for when we get people in areas that we want to keep them in. But, a step in the right direction.”

Gotham Debutant Gets Her Goal

The reigning league champions dominated much of the opening 21 minutes of the match, pinning Gotham into their own defensive half and disrupting their attempts to play out of the back. The momentum, however, abruptly shifted in Gotham’s favor in the 22nd minute when they were awarded a penalty after Trinity Rodman took Margaret Purce down with a clumsy challenge inside the Spirit’s box.

Kristie Mewis, who missed last week’s game due to injury, made her Gotham debut memorable with a well-taken penalty — placing the ball in the right corner of the net with her left foot.

“It obviously felt really good to put the Gotham jersey on tonight and represent the club. And obviously to get my first goal with the team was really special,” said Mewis, who played as the focal point in a diamond midfield — a new shape Parkinson has employed this season. “I’m glad that I could give an impact like that.”

After finding the opening goal, Gotham seemed to settle more into the game, finding a bit of possession and taking the lead into the halftime break. The Spirit, though, came firing back in the second half, finding an equalizer through last season’s Golden Boot winner, Ashley Hatch, in the 61st minute.

In a moment of static defending, the Spirit’s Ashley Sanchez served a ball into the box, which Gotham rookie Taryn Torres attempted to head out of danger. But her clearance wasn’t strong enough, and the ball rolled into the path of Hatch, who was given the space and time to get her shot off and finish past Ashlyn Harris.

Just minutes later, the game took another turn when Spirit defender Amber Brooks was shown a second yellow card following a challenge against Purce. The call was a controversial one, as Brooks, working back toward her own goal, seemed to win the ball before making contact with the Gotham forward.

Gotham, though, couldn’t make the most of their advantage. And the Spirit continued to push forward in attack, creating chances and looking like the more likely of the two sides to find a winner.

Gotham finished the night with just eight shots, two on target. They conceded 29 shots, with eight on target from the Spirit.

The club won’t have much time to tinker after Friday’s result as they head to Orlando to face the Pride Wednesday for their third consecutive away match of the Challenge Cup. Find the match on Paramount+ at 7 p.m. ET.