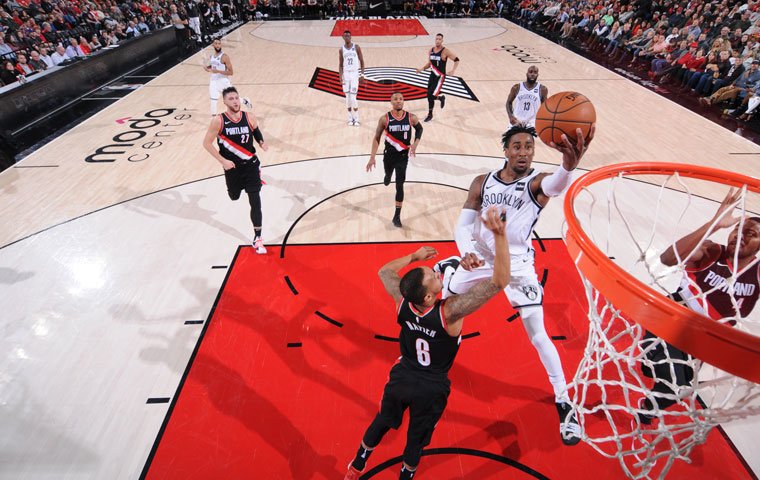 Thanks in no small part to a 17-0 run in the third quarter and two icy buckets from D’Angelo Russell over Ed Davis in the final minute, the Brooklyn Nets enjoyed a 101-97 road victory over the Portland Trail Blazers to rise to 5-7 for the season. The Nets overcame having to deploy a rotation lacking Mr. Glue Guy, Trevor Booker, and the sole bright spot of Tuesday’s road defeat in Denver, Tyler Zeller.

Hey, They Can Guard Sometimes!

The Nets’ defense walked into Portland as a bottom ten defensive unit in the league, as its lack of size and point of attack guard defenders routinely have been exploited. Encouragingly, in the midst of an exhausting Western Conference road trip, the Nets gave perhaps its best defensive performance of the season.

Sure, Jusuf Nurkic had a plethora of unbothered midpost set shots to bucket 15 points in the first half. Sure, Damian Lillard and CJ McCollum created any look they wanted in crunch-time and forced the Nets’ offense to keep up.

Still, the Nets did well to limit the Blazers to “only” 23 three-point attempts in the game (man, the game has changed). Alert communication and just pure effort had the Nets’ perimeter defenders contesting, if not dissuading, most of the Blazers’ jumpers. Quincy Acy, Rondae Hollis-Jefferson and DeMarre Carroll all deserve plaudits for often switching and rotating as de-facto centers, yet avoiding foul trouble and causing havoc in the passing lanes for five combined steals. Acy, Hollis-Jefferson and Carroll also held their own on the glass against what had been the best rebounding team in the league, losing the battle 51-49, but not in a rout despite the huge size disadvantage.

Coming off an eight turnover disappointment of a performance against the Nuggets, Russell continued into this Blazers game still in a seeming malaise. Russell’s first half defense remained as porous as ever, even with Lillard not taking advantage often. Most worryingly, Russell’s jump shot looked like a mess in the first half. In the Stephen Curry era of weaponizing the pull-up jump shot, especially beyond the arc, folks have prioritized quicker releases and less rigidity in the arm motions of the jumpers. However, D’Lo’s jumper seems too loose at times with his arms acting a bit independent of the rest of his body positioning. With Russell always prepared to pull up out of motion, he has been prone to some ugly misses for a player who has the most trust shooting the basketball.

However, Russell transitioning into more of a facilitator role to emphasize ball movement in the second half reminded everyone why Brooklyn has given him the keys to the franchise. Russell earned his nine assists for the game by simply quickening his decision-making with the ball and putting the Blazers’ defense on its heels more often. The Nets did not shoot excellently in Portland, with only 42.9 percent from the field and 31.6 percent from deep. However, there is a difference between shooting poorly because the offense bogs down and simply missing open looks. Russell helped ensure the correlation was the latter. Joe Harris, Allen Crabbe and DeMarre Carroll will see the fruits of their off-ball motion labor harvest more another night if Russell continues to prioritize finding them.